Highlights
Small town feel, but close enough to Sapporo to enjoy the best of both worlds: big city life and spectacular outdoor activities year round. Main claim to fame is New Chitose Airport.

Chitose City, with a population of about 96,500, is located about 45-km southeast of Sapporo. Its main claim to fame is its proximity to New Chitose Airport, the main airport serving Hokkaido, but it is also known for being surrounded by nature and its idyllic location between Shikotsu-Toya National Park to the west and the sprawling Ishikari plain to the east.

Life in Hokkaido is much slower than on the main island of Honshu, but in a small city like Chitose, you can enjoy modern conveniences and still be close to Hokkaido’s abundant nature and wide expanses.

Most people have heard of “Chitose” in the context of New Chitose Airport, located just south of the city and the main airport serving Sapporo. New Chitose Airport is one of the busiest airports in Japan and the Haneda (Tokyo) – New Chitose route is the world’s busiest routes based on passenger numbers.

Hokkaido is a popular destination for South Korean, Taiwanese, and mainland Chinese tourists, and there are numerous daily direct routes between Chitose and major Asian capitals.

Also important to know is that Chitose is a military town, in the sense that a large part of its population consists of members of the Japan Air Self-Defense Force (JASDF) who are stationed at Chitose Air Base. This is a JASDF base located adjacent to New Chitose Airport. It is the JSDF’s main base in northern Japan and is responsible for monitoring the country’s maritime borders with Russia.

Chitose is only 40-km east of Shikotsu-Toya National Park, which has some of the most spectacular scenery in Hokkaido and nearly 1000 square kilometers of lakes, volcanoes, hiking trails, and hot springs.

Near Chitose you can enjoy a range of summer and winter outdoor activities, including camping, canoeing, horseback riding, golf, and of course, skiing.

Lake Shikotsu is a caldera lake and is part of Shikotsu-Toya National Park. In the background is Mt. Fuppushidake. It is about 40-km west of Chitose. Image: Wikimedia

Climate and Cost of Living

The overall cost of living in Hokkaido is about 11% lower than for the nationwide average, based on a recent survey of average household expenditures by Japan’s Ministry of Internal Affairs.

Climate and Cost of Heating

Chitose is located on the 42nd parallel north, about the same latitude as Boston, Massachusetts. The prefecture is known worldwide for its ski resorts and magnificent snow accumulation, but the area near Sapporo, including Chitose, has relatively mild winters compared to the rest of the island.

Still the daily average mean temperature from November to March is -2.8 degrees C (29 degress F), with the coldest month being January. From November to early April average snowfall is about 5 to 10-inches, but can be much more in a bad winter.

You should also be prepared for bitterly cold winter winds that can wreak havoc on your skin, especially on a sunny winter day.

In the summer, however, Hokkaido enjoys clear, beautiful days with very low humidity, while most of Honshu and southern Japan swelters in heat and humidity.

No central heating or cooling

It’s important to know that most houses in Japan do not have central heating or cooling.

In Hokkaido, people stay warm by using kerosine stoves (which omit toxic fumes), so it is recommended that you use them while ventilating your room. Yes, essentially, it is recommended you leave your window slightly open, while running your stove!

Also popular are kotatsu. A kotatsu is a low, wooden table frame covered by a heavy blanket with a heat source underneath. Old-style kotatsu were heated with charcoal but modern ones use electricity.

Example of a kotatsu, which is an efficient way to stay warm in the winter. Photo: Matome naver

You can expect to spend less on fresh food in Hokkaido compared to major metro areas in the rest of Japan, too, as the island is the country’s leading producing of many crops, including rice, what, potatoes, beans, vegetables, and most of all, dairy products.

There are plenty of regular supermarkets and convenience stores in the city where you can do your shopping, but one of the great things about living very near where your food is actually grown is being able to buy farm-direct food.

In Hokkaido’s smaller towns you can sometimes even buy fresh fruit and vegetables from unstaffed fruit and vegetable stands by the side of the rode. These stands work on an honor system. Take what you want to buy and put your cash in the little padlocked cashier box.

For buying fresh food right in the city, go to Salmon Park Chitose, a large indoor facility where you can buy farm-direct produce or get a meal at the food court and restaurant. There is also a good play area to take the kids for an indoor playdate.

The area around Chitose produces most of the chicken eggs produced in Hokkaido, so if you like making omelets or oyako donburi (chicken-and-egg rice bowl) you’re in the right place!

A local favorite is the Chitose burger, which was developed at the Kikkoman Chitose factory to highlight the high quality of eggs produced by farms around Chitose.

Transportation and Getting Around

Chitose has two main train lines, the JR Chitose line and the JR Sekisho line and a city bus system. From JR Chitose station, it is about an 18-min direct ride to Shin Sapporo Station by limited express and costs about ¥1,260.

If you want get of the city, you might want to consider getting a car because natural areas and some towns are not connected by rail. Hokkaido also has a very good highway bus system for inter-city long-distance travel.

According to HOME’S, a Japanese real estate listing site, the average rent for an apartment in Chitose (as of October 2017) is:

Apartments For Rent in Chitose 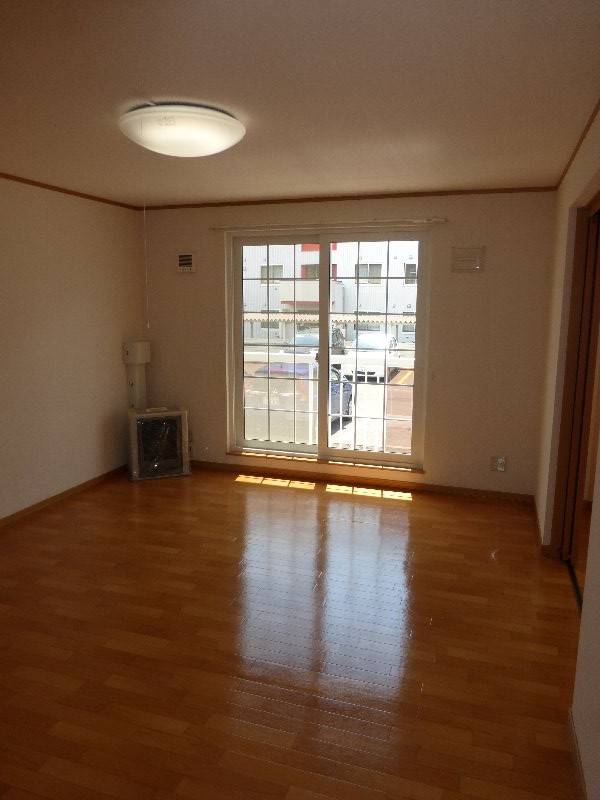 Example of a 1BR 44-sqm apartment for rent in Chitose. Note the kerosine space heater, called a “sutobu” ストーブ in Japanese.

The Tomakomai Tobu Industrial Base and Major Companies

The Tomakomai Tobu Area, or Tomatoh, is a huge industrial base (of 10,700-hectares) located in central Hokkaido, which includes New Chitose Airport, the Port of Tomakomai and major highways and railways. Industrial land here is much less expensive than in other parts of Japan, and the prefectural government actively promotes the region as an economical and conveniently located place for companies to base their factories.

Major companies with factories near Chitose include Kikkoman, Kirin, and Calbee (snack foods). These factories all offer

If you do not have Japanese language skills and/or other specific skills, your options may be limited to teaching English jobs. Chitose has branches of the major language school chains like NOVA and AEON. There is also demand for one-on-one English lessons by JASDF members looking to hone their English skills.