A residential area that’s as well connected and convenient as anywhere in the world’s largest city can be. But distinctly calmer, quieter and far more liveable than many other parts of Tokyo.

Meguro is a special ward in the Tokyo metropolis. It’s a predominantly residential area that’s as well connected and convenient as anywhere in the world’s largest city can be, while still being distinctly calmer, quieter and far more livable than many other parts of the city.

Apartments for Rent in Meguro

Meguro is considered a very desirable residential neighborhood among both Japanese and non-Japanese. There are many luxury condominium buildings and single-family homes catering to high-end residents, but this doesn’t mean that you can’t find mid-range or even budget accommodation (such as shared houses or guesthouses) in the area.

According to HOME’S, a Japanese real estate listing site, the average rent for an apartment near Meguro (as of March 2016) is:

Apartments and Houses for Sale in Meguro

Meguro is also a popular area for condominium and home buyers. You can search for houses for sale in Meguro on our listing pages.

The first association with the name Meguro is usually Meguro station, on the Yamanote line, the line that delineates Tokyo’s central wards from the rest of the city.

Being on the Yamanote line, Meguro is convenient for quickly getting to Tokyo’s business, shopping, and entertainment hubs. 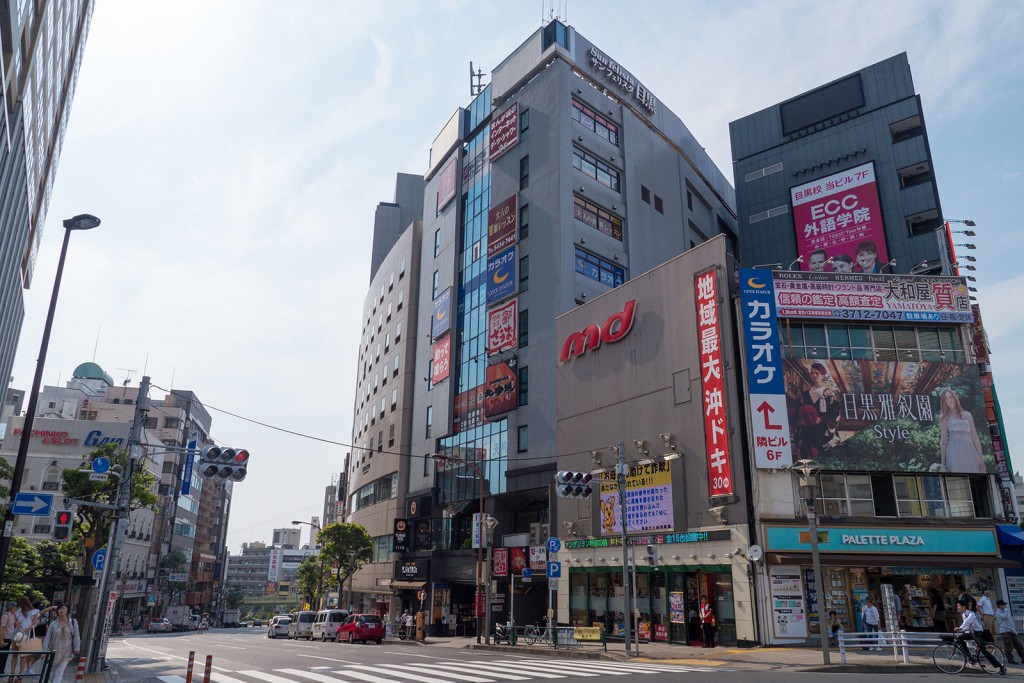 Meguro station is also served by the Tokyo Metro Namboku and Toei Mita subway lines and the Tokyu Meguro line.

Within the ward, there are buses and the quiet streets paired with relatively steep hills makes cycling an attractive option for getting around.

Meguro has more restaurants, cafes and taverns than can be conveniently quantified, to serve its growing residential population. The majority of which are smaller, individually owned establishments, with their own unique flavours, and specialities.

From gourmet burgers to ramen masters, Chinese to Creamy Lattes, one can eat something different every day for many years before having to repeat. 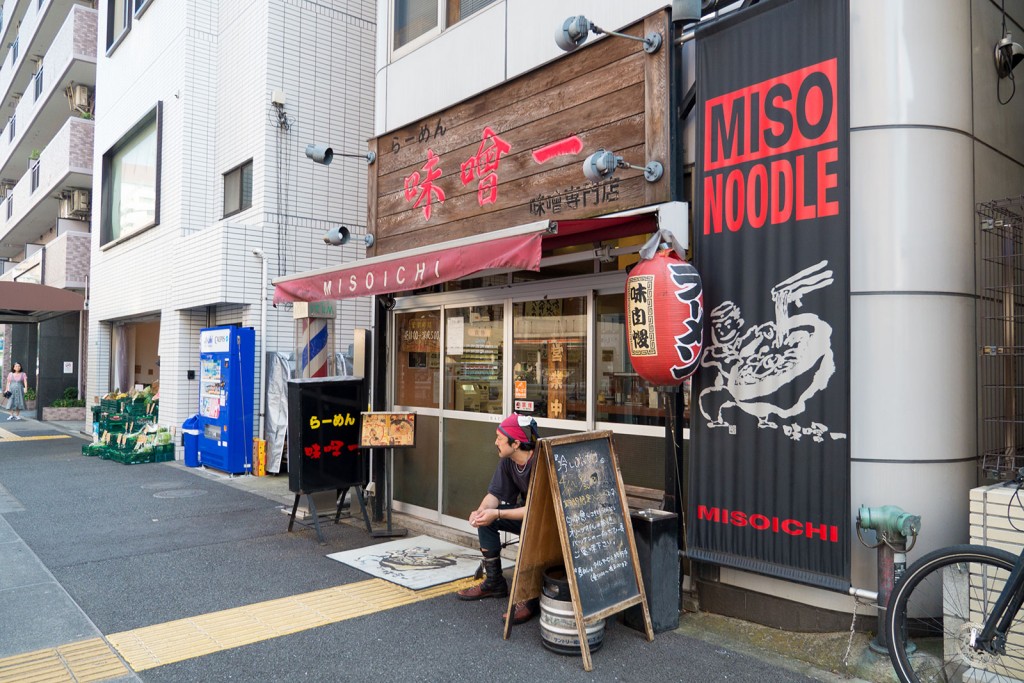 While most eateries are found within close proximity to train stations, a fair number can be found randomly, in the middle of suburbs, attached to people’s houses. 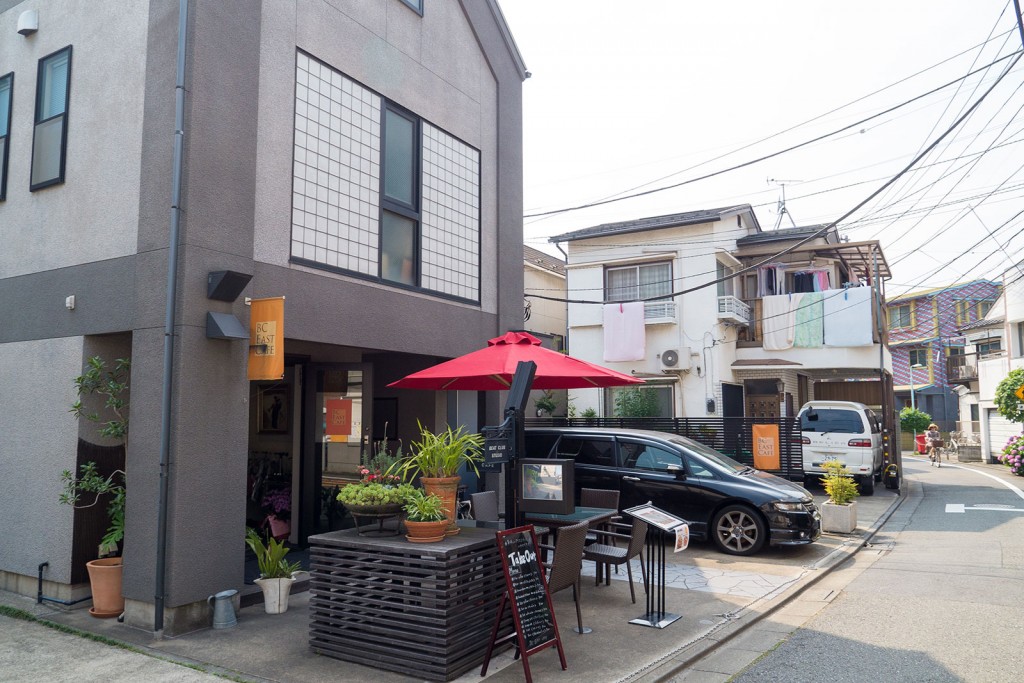 A cafe tucked into a quiet, residential neighborhood in Meguro. Photo: Nayalan Moodley

The Naka Meguro neighborhood is in the north central part of the ward. It is known for its laid back atmosphere, hipster designer boutiques, and an abundance of small dogs being walked by their owners, but is very central to key hubs in the city.

Naka Meguro station is on the Tokyu Toyoko line and the Tokyo Metro Hibiya line. From Naka Meguro it is a: 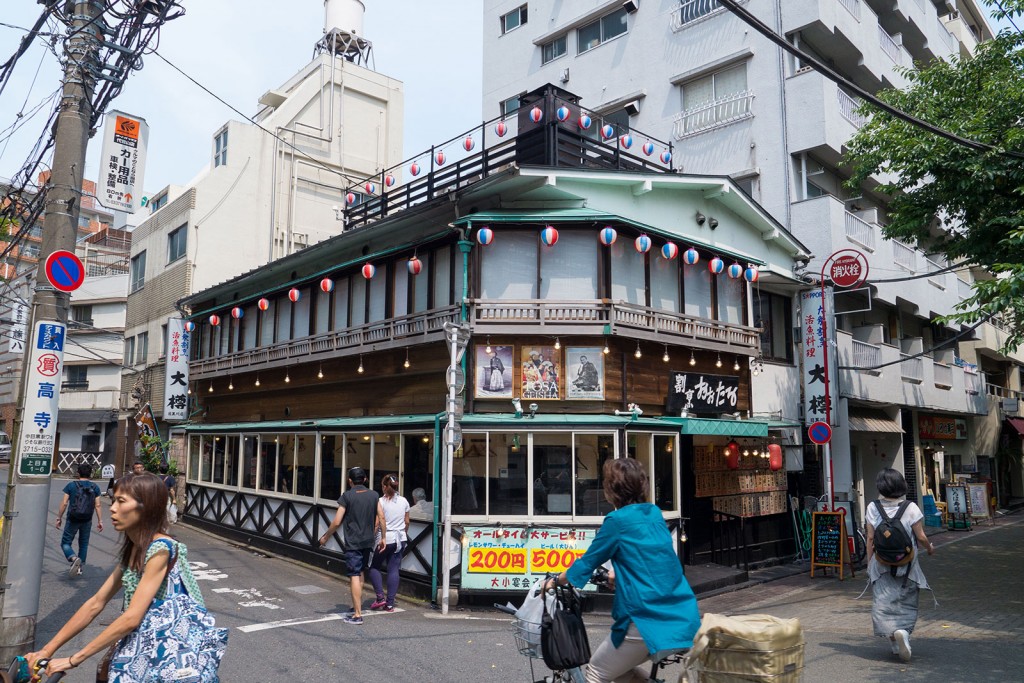 On sunny days, you can enjoy an expertly brewed coffee or tea, at an open air table, in one of the Tokyo’s most avante garde districts. Being a short walk from the fashionable Daikanyama district in Shibuya creates an interesting artistic feedback loop between it’s fancier couture and Naka Meguro’s hand-­made hipster designer boutiques. The atmosphere lends itself well to pocket museums and up­-and­-coming creative businesses. It also contrasts with the older, formerly working class surroundings that hearken back to when the river was just a glorified drainage ditch. 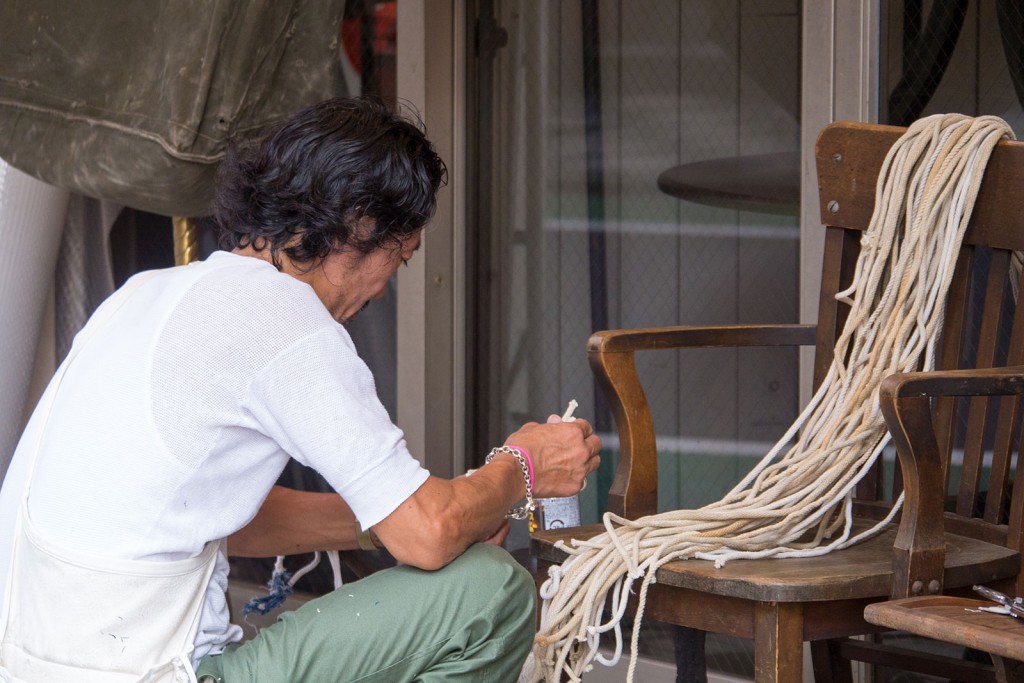 A craftsman working at a small shop in Naka Meguro. Photo: Nayalan Moodley 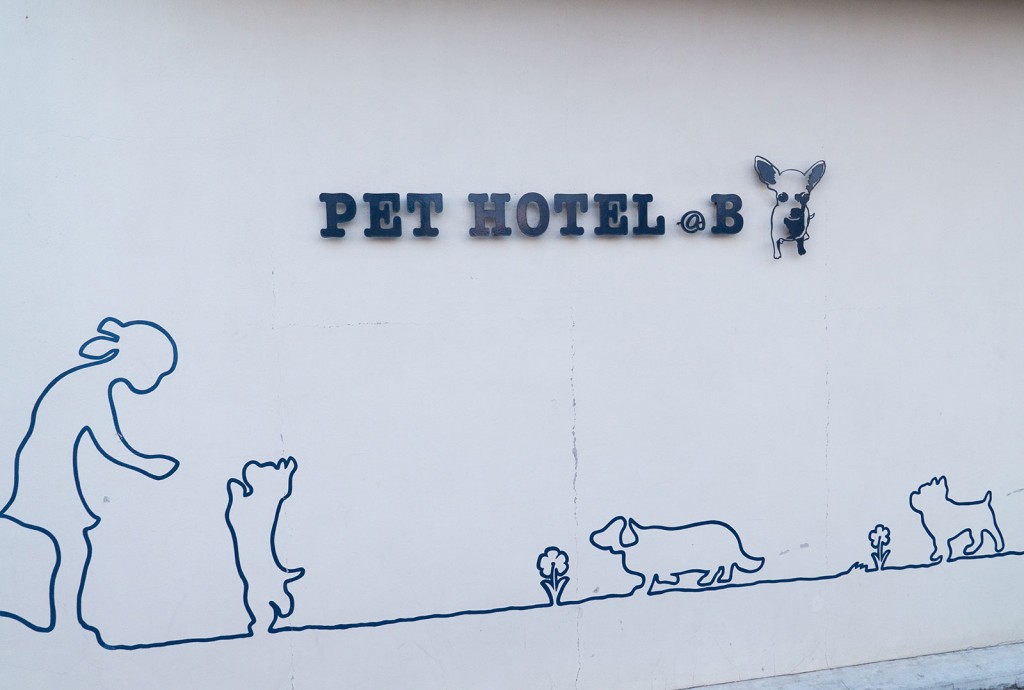 A pet hotel catering to the many beloved dogs and cats and their human companions who live in Naka Meguro. Photo: Nayalan Moodley

Every spring Nakameguro’s gentrification validates itself when cherry trees planted along the river blossom into a spectacular tunnel of pink. It has become one of the most popular hanami spots in the city, and for a short while bring’s the Tokyo bustle to the quiet avenues beside the river.

Cherry blossoms overflowing along the Meguro River. Photo by Chris Dickey on Flickr.

Apartments for Rent in Naka Meguro

In Ikejiri­Ohashi station (one stop from the Shibuya station and it’s massive commercial district), where space is sparse, city planners developed the Meguro Sky Garden. Built above an expressway interchange, it’s an unlikely escape that provides tranquility, greenery and impressive views of the surrounding city, in one of the more densely packed areas of the ward. 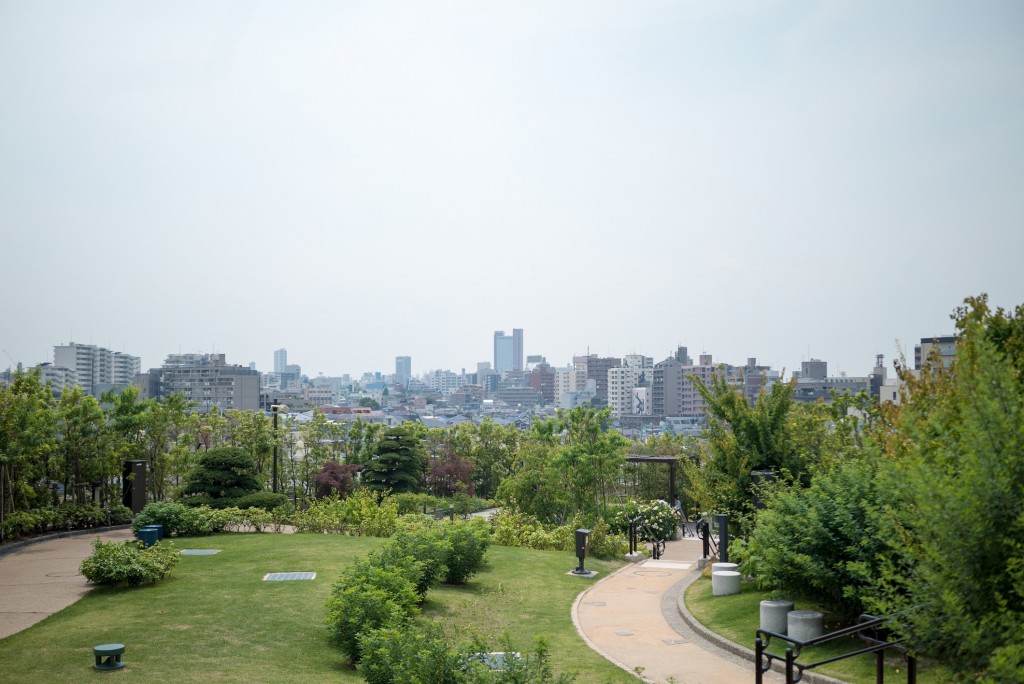 If the parks aren’t appealing, Meguro also has traditional quiet spaces for rest and contemplation.

Daienji temple has 500 miniature statues of Buddha, Ryusenji hosts the Black Eyed Fudo that guarded the south west approach into Edo, and a number of smaller shrines and temples spread out through almost every district in the ward.

For fans of fine art and design, the Tokyo Metropolitan Teien Art Museum, housed in the art deco structure that was formerly the residence of Prince Asaka, has a number of exhibits throughout the year, exploring the some of the world’s greatest creative talent.

If there is one thing that is lacking in Meguro, however, is a crazy busy side of Tokyo city life, apart from around hub stations, there aren’t many faceless, department chain stores.

The only movie house, Meguro cinema, is a single screen affair alternating two titles at each show time.

The Blues alley hosts some of the biggest names in sultry slow jams, over dinner and drinks. Only the Meguro Rock­May­Kan, a seedy live house, adds a touch of random madness, as many famous visual rock and metal bands in Tokyo got their starts there. Even through the bright pink hair and piercings, however, Meguro’s artistic character shines through.

Meguro’s relative lack of corporate conformity, in-­your-­face events and cookie-cutter apartments gives passionate individuals levels of comfort and freedom, that, considering it’s convenient location, are far more valuable than a massive crosswalk and giant video displays could ever be.

Search for: apartments for rent in Meguro, houses for sale in Meguro