Although not part of the 23 special wards of Tokyo, Tachikawa brings a lot of modern conveniences to west Tokyo. You’ll find plenty of department stores and other national chains around the station. If your work/school is located nearby, you might find that Tachikawa offers the perfect blend of city/residential for you. 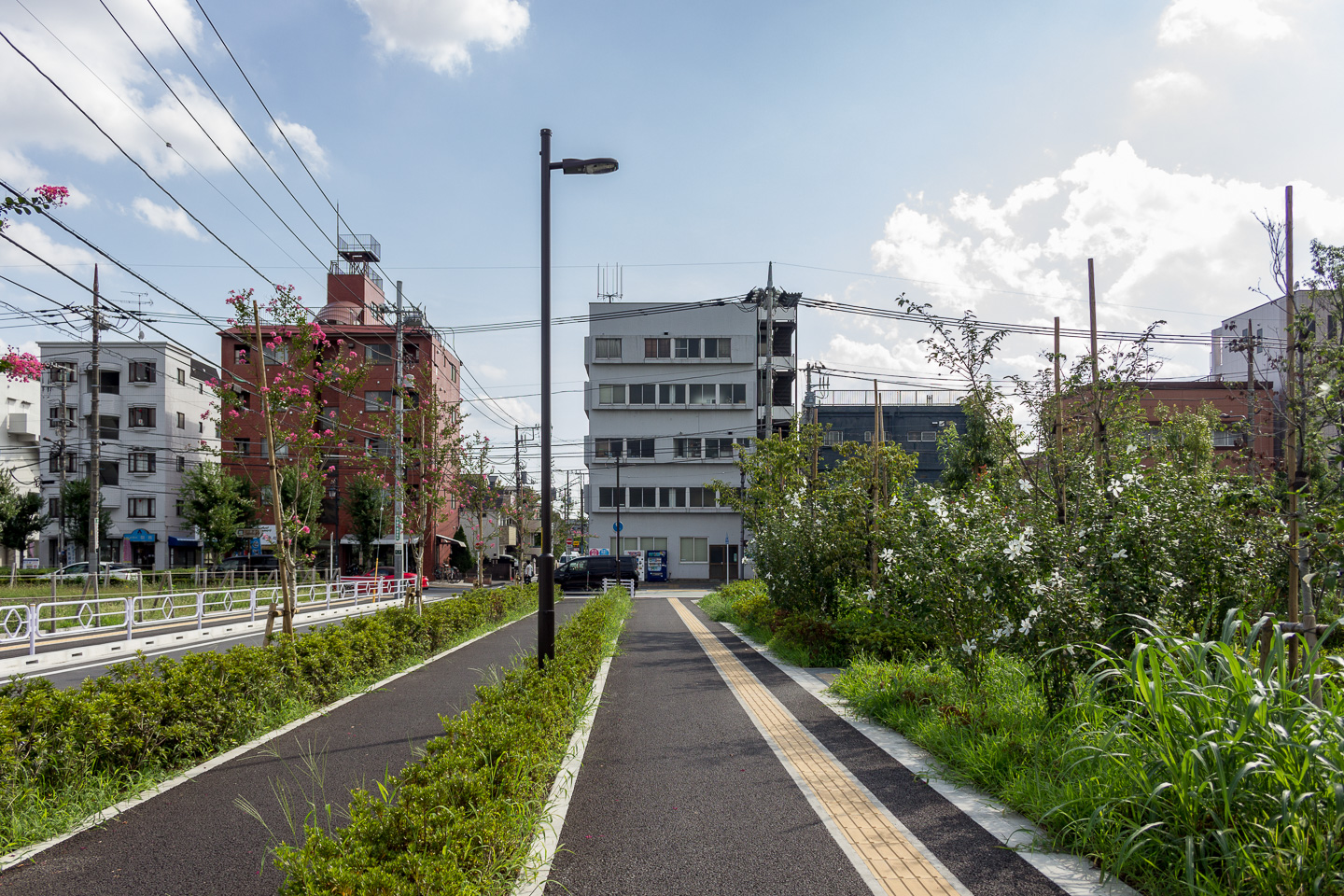 When compared to downtown Tokyo, I always think of the open sky and plenty of sidewalk space out in West Tokyo. I also really enjoy the amount of green as well even just on a short walk to the station. Photo: Scott Kouchi

Tachikawa at a glance

If you look at a picture of Tachikawa Station, you might mistake it for being a station within downtown Tokyo because of the towering department stores and shopping malls. Despite being located almost 45 minutes away from Tokyo Station (only 27 using a rapid train), you’ll find that there are plenty of city life comforts available in Tachikawa. As such, it should be relatively easy to find household necessities or products without having to venture too far out. There can be a buzz of activity around the station (also when events are held at the Showa Kinen Park), but a quick walk away from the station and it’s much calmer.

As a foreigner in Tokyo you’ll get to know the Immigration Offices pretty well if you have to renew your visa. There is a huge Immigration Office in Shinagawa which most people tend to visit since it’s in downtown Tokyo. However, there’s a smaller office located in between Tachikawa and Kunitachi which (in my humble opinion) provides a much calmer visa renewal experience. You can get to the Tachikawa Immigration Office by taking a roughly 20-minute bus ride from the station. 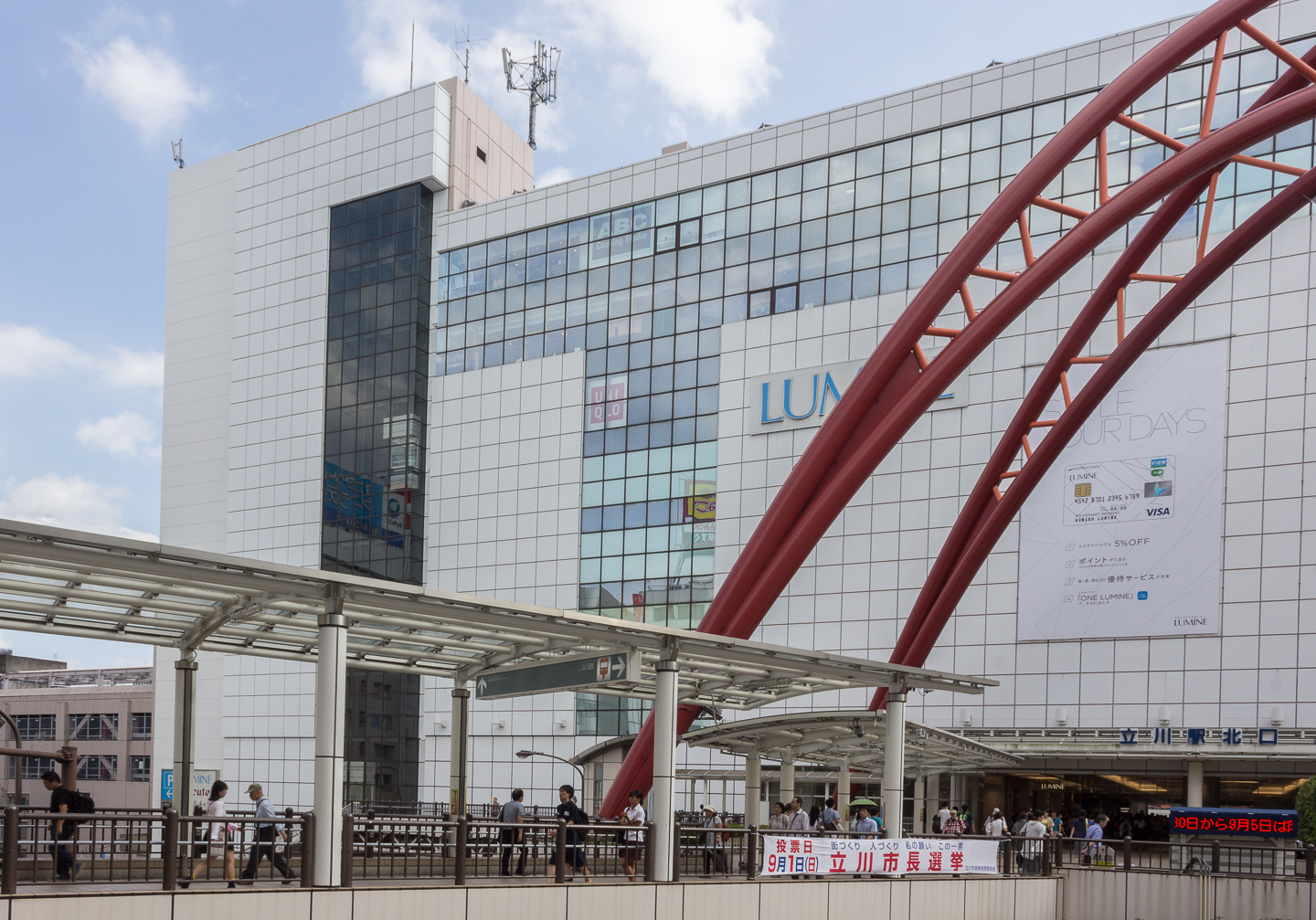 A LUMINE shopping mall is located right at the station, making it easy to check out the latest fashion offerings without needing to drag yourself to downtown Tokyo. Photo: Scott Kouchi

A few different lines run through Tachikawa Station, making it a convenient hub for getting around west Tokyo. You’ll have access to the JR Chuo Line, JR Nambu Line, Narita Express, and JR Ome Line.

Tachikawa Station is surrounded by large department stores, making it quite convenient for any shopping and dining. With that said, this is also the 16th busiest station managed by JR East – meaning it’s just as busy as Yurakucho and Ueno during rush hour! So despite being distanced from downtown Tokyo, you still might experience a bit of the crushing commute if you have to take the train during rush hour. 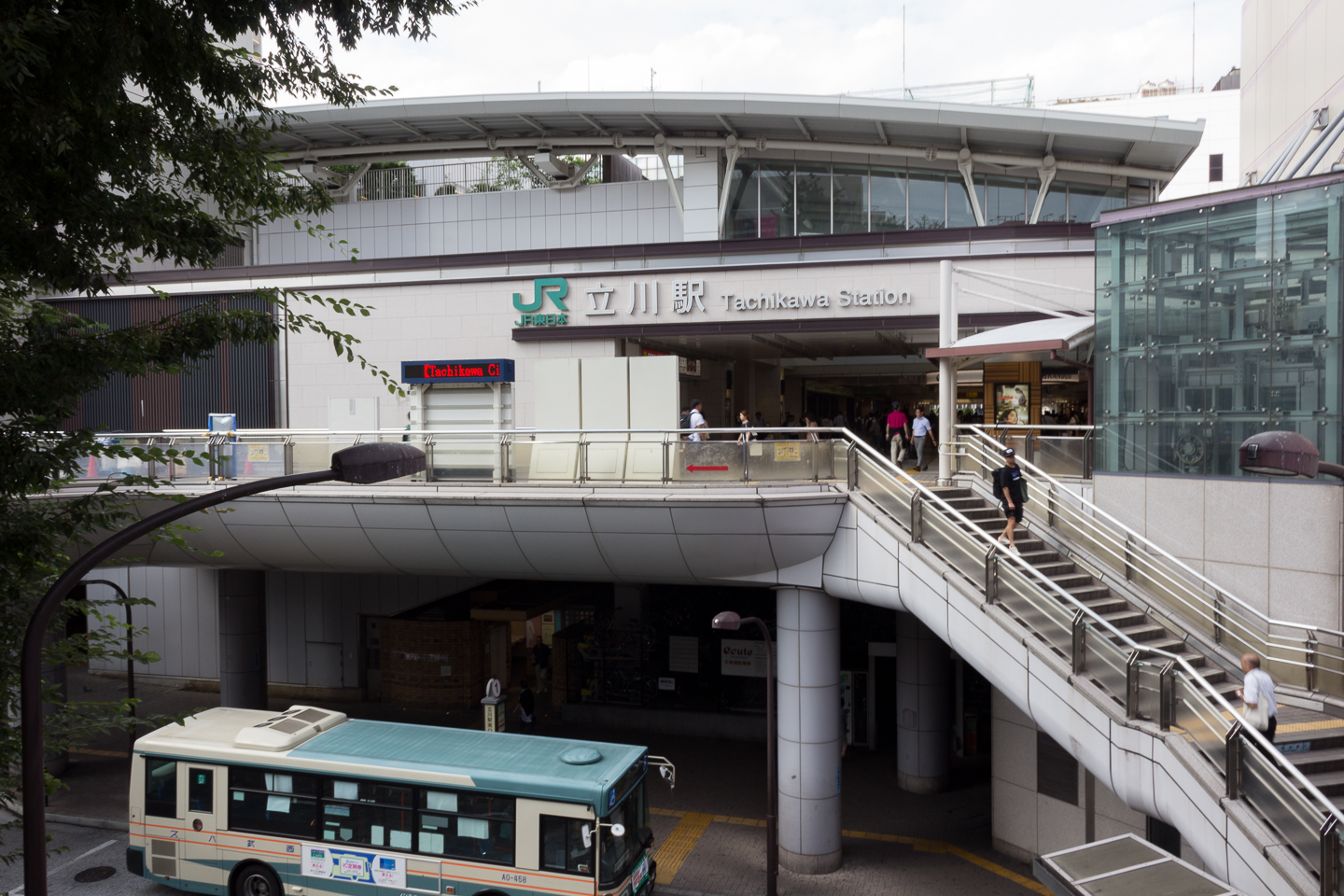 A view of the South Exit of Tachikawa Station. Photo: Scott Kouchi

While rent itself might be on the cheaper end of the spectrum of average Tokyo prices, keep in mind the fact that this station is roughly 40 minutes away from Shinjuku. That’s just the time-cost, the actual cost for a one-month commuter pass between Tachikawa and Shinjuku is ¥13,900 yen (if you’re working, most companies will cover your transportation fees, but it’s just a good idea to keep this cost in mind). 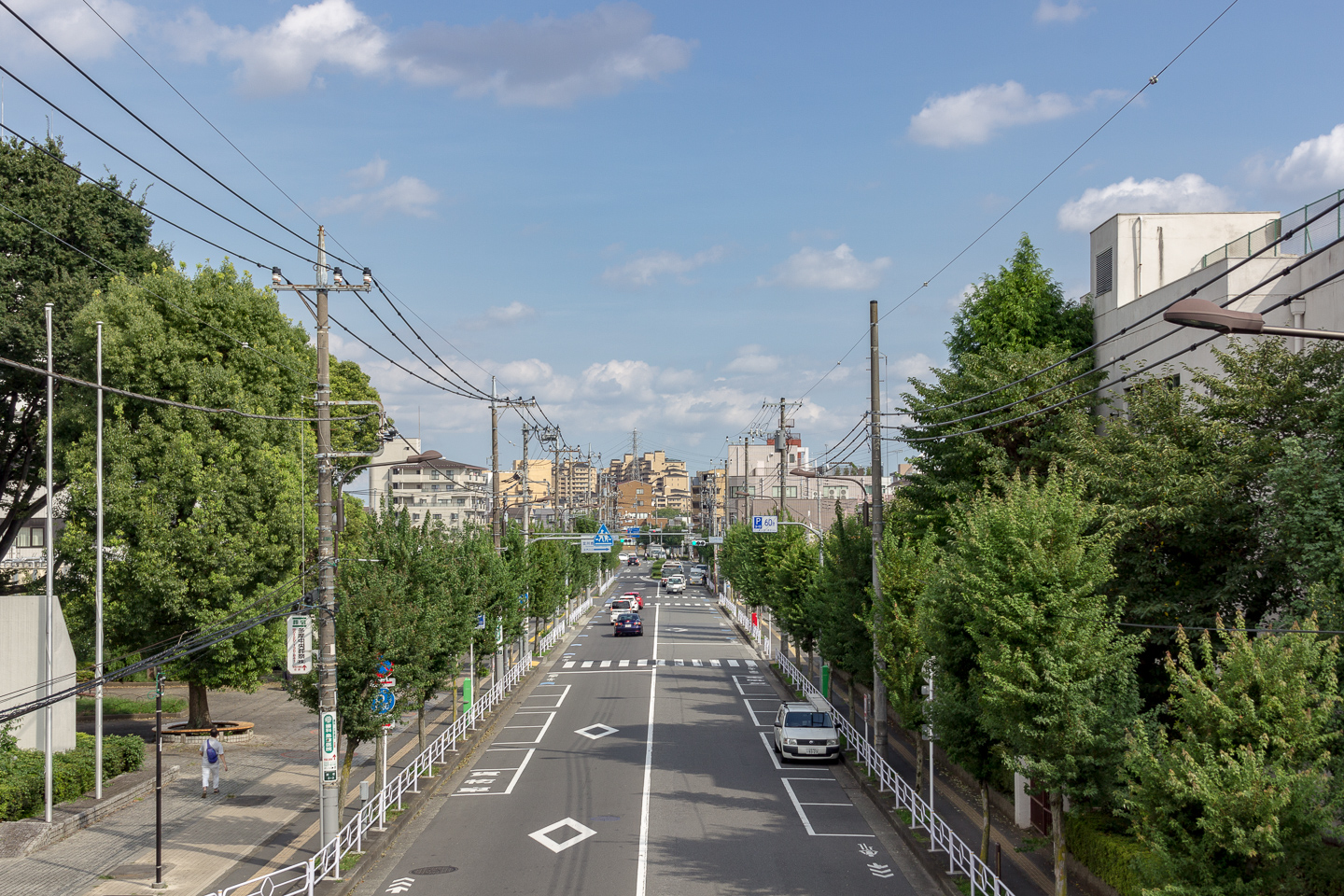 Looking down a road close to Tachikawa Station. Again, plenty of open sky and green to keep one as connected to nature as you can be in a city like Tokyo. Photo: Scott Kouchi

On Real Estate Japan, you can find much less expensive options than the average numbers mentioned above.

For example, rent for 1K apartments near Tachikawa Station starts at around ¥46,000 per month.

Apartments for rent in the Tachikawa area

To see current listings, please click on the links below. 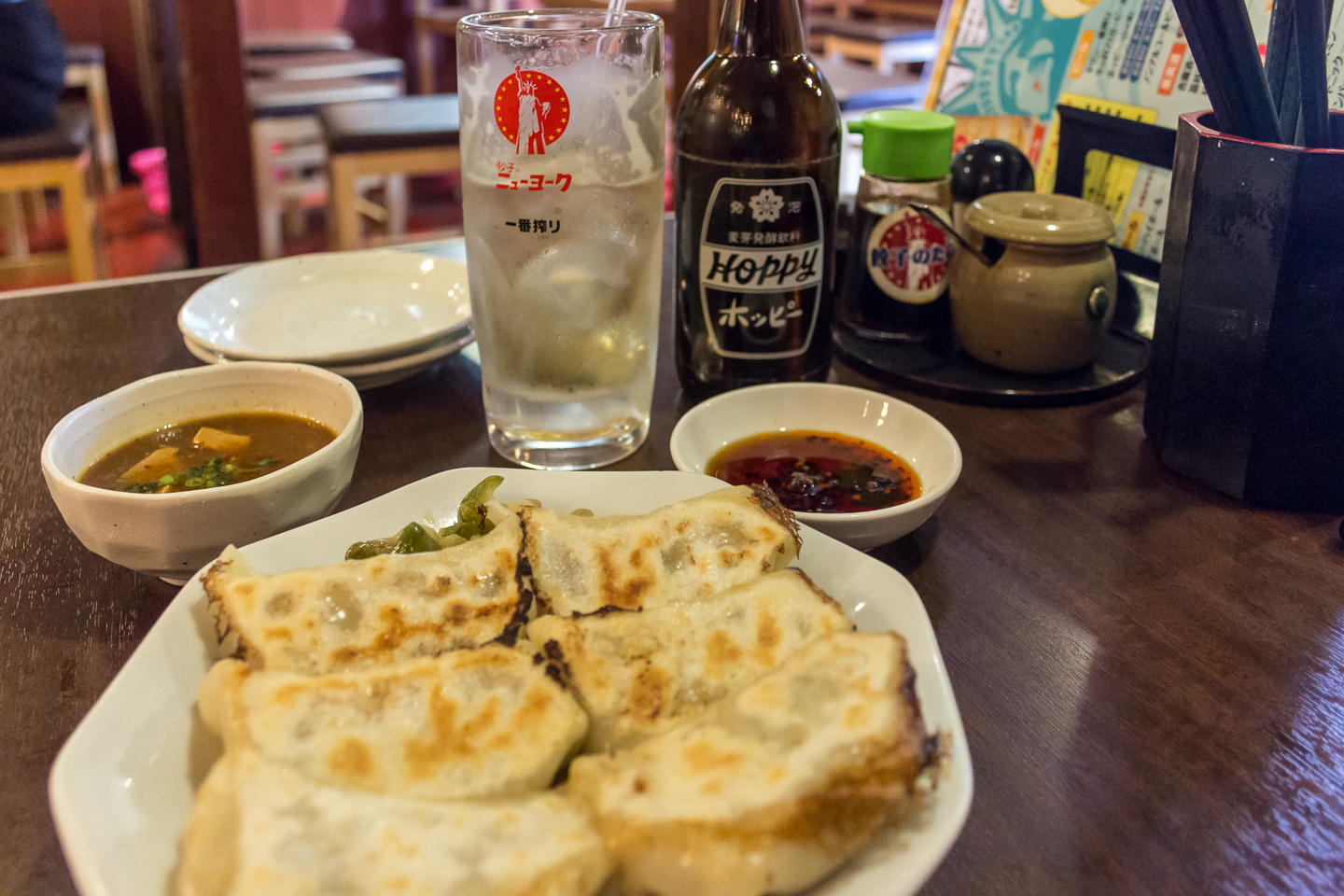 Taking a gyoza break at NY Gyoza in Tachikawa. Hoppy is a type of drink that was popular in Tokyo during the postwar period when beer was a difficult commodity to come by. The Hoppy alone just barely contains alcohol (~0.8% ABV) but it’s mixed with a shot of shochu (~25% ABV) until the resulting combination hovers around 5% or to your preference. Currently, Hoppy is experiencing a bit of a revival in popularity thanks to its retro/throwback hipness! Photo: Scott Kouchi

There’s no doubt that Tachikawa offers plenty of shopping and dining options. From electronics to groceries to sweets, the department stores around Tachikawa Station have something for everyone. 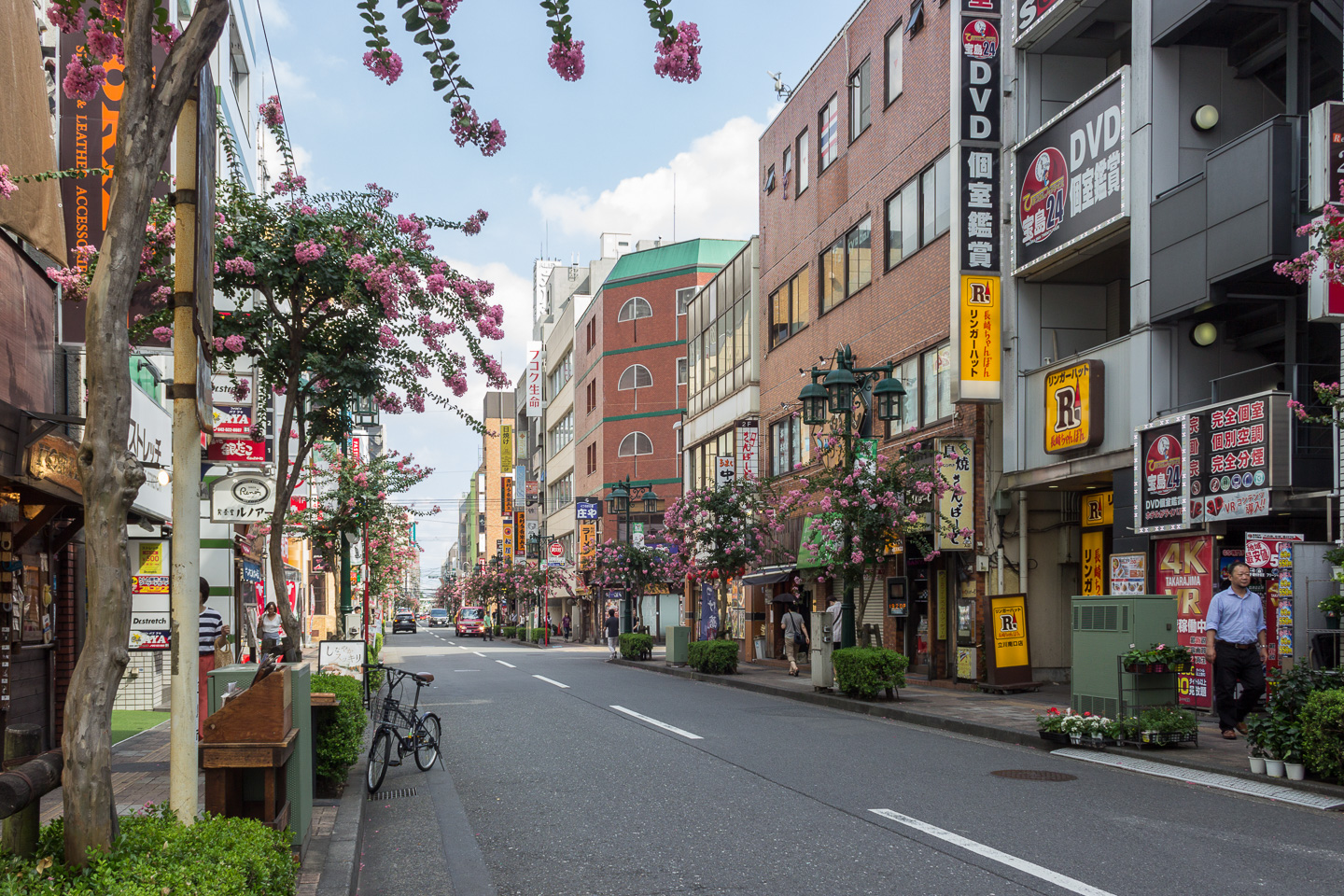 You’ll find a wide variety of restaurants and stores around the South Exit of the station as well. Photo: Scott Kouchi

There’s a Seijo Ishii supermarket located at the station. A two-minute walk north and you can find a Hanamasa (discount grocery store). And there’s also an Inegaya supermarket just two minutes south of the station.

The sprawling Showa Kinen Park is located just 15 minutes away from the station on foot. In this park, you can find a few cafes, plenty of places to have a picnic, and beautiful natural scenery. There is a 450 yen entrance fee for adults. 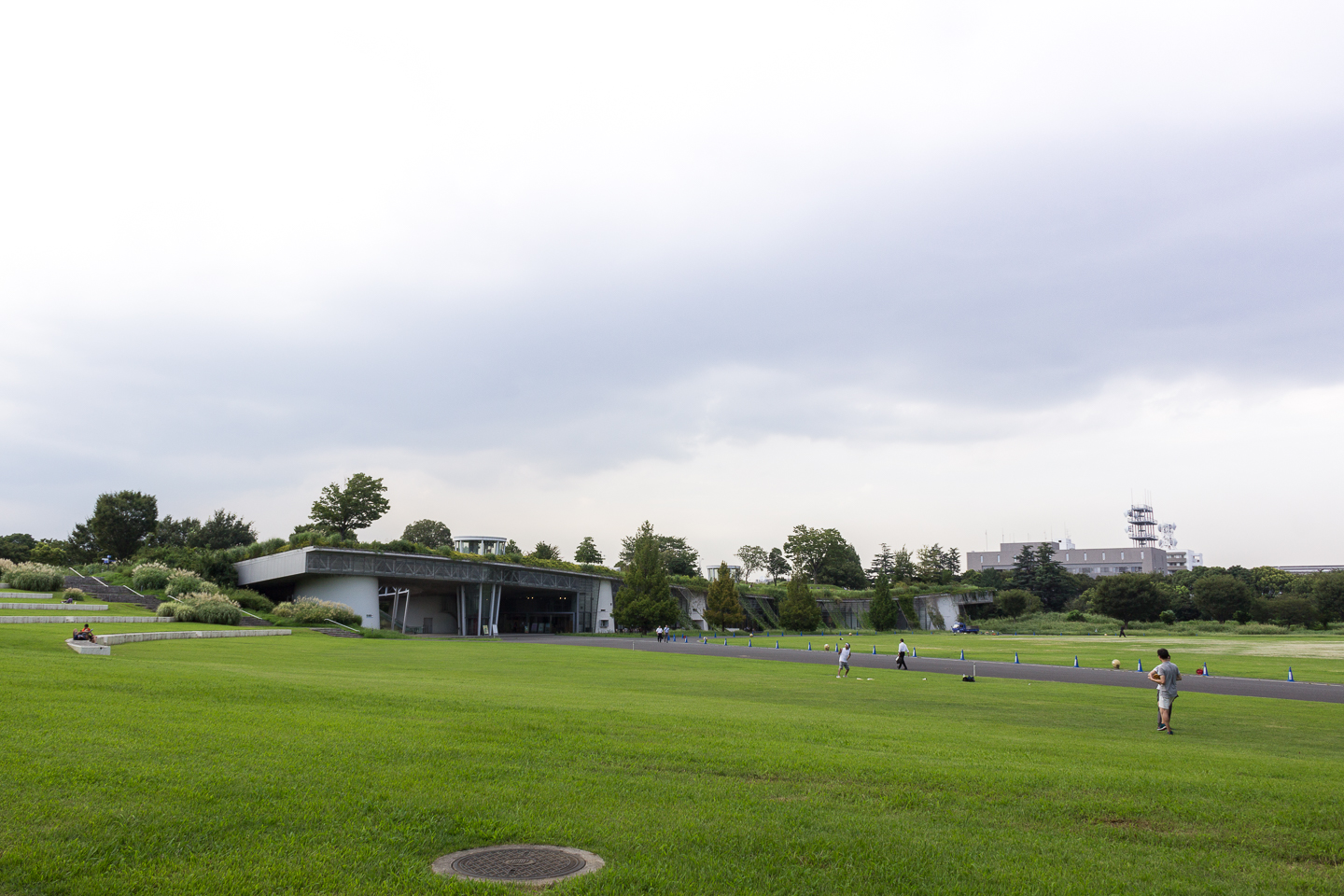 This is just the grounds outside the park, and there’s still plenty of space to stretch out. Inside the park itself there’s many different botanical exhibits, a restaurant, playgrounds, and more. Photo: Scott Kouchi

There is a MEGALOS gym to the north of the station, and another location to the south. There are a few other gyms fairly close to the station as well so you shouldn’t have trouble finding one that meets your needs. 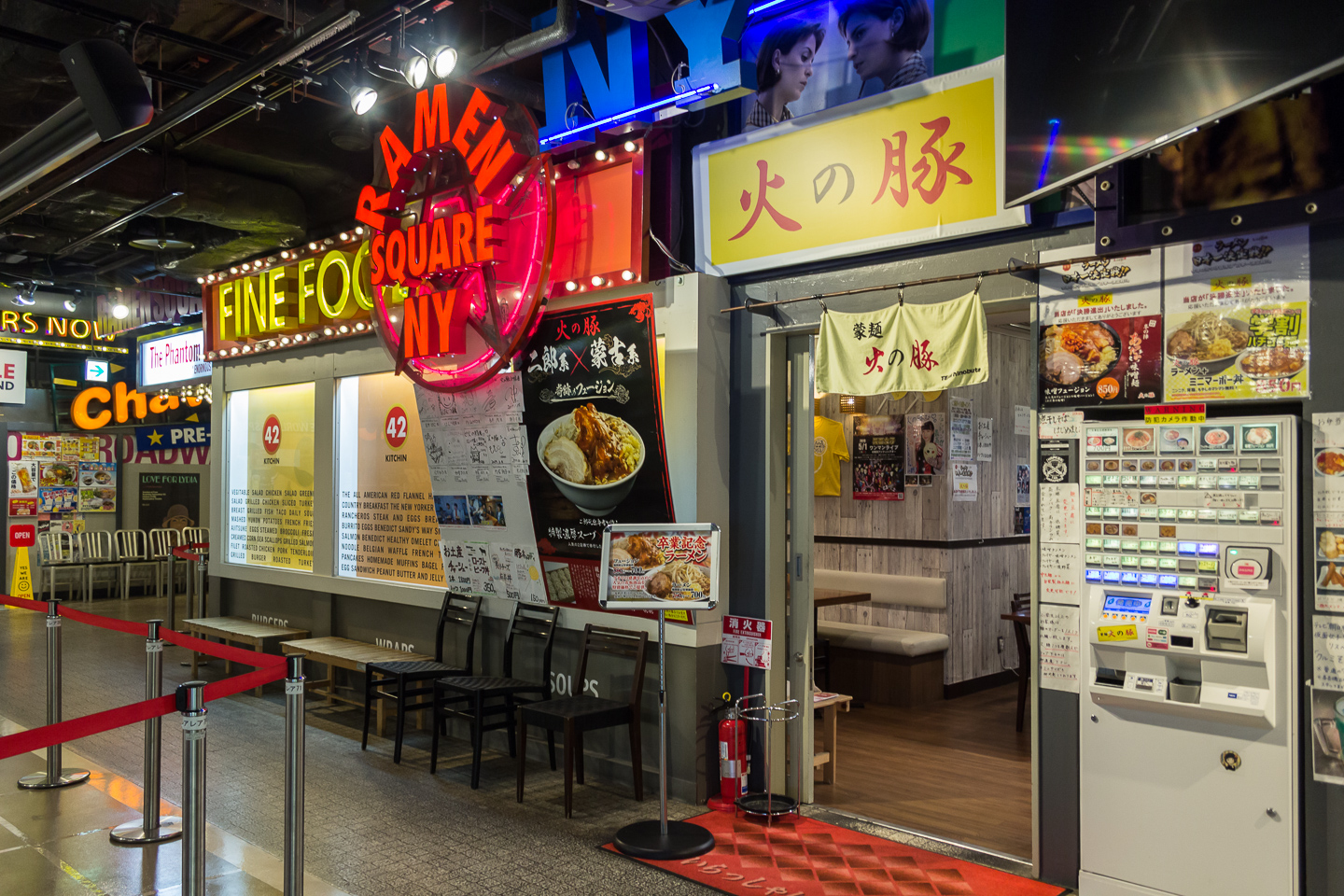 A shot of Ramen Square NY – a theme-park like collection of ramen stores on the 3rd floor of the AreArea 2 building right next to Tachikawa Station. The interior is adorned with fun nods to American pop culture! Photo: Scott Kouchi

Keep in mind that since this is one of the bigger stations in the area, it draws a pretty large crowd of people. This also means there’s plenty to do. With movie theaters located nearby the station, you’ll have entertainment options available without having to take a trip to another station. This movie theater (Cinema Two) has a restaurant/bar built-in to the first floor, making it easy to catch dinner and a movie close to the station! Photo: Scott Kouchi

If you’re a fan of IKEA furniture, you’ll be pleased to know that there is a location in Tachikawa. There’s also a Nitori as well, which many have come to call the “Japanese IKEA” since it sells a wide variety of furniture at affordable prices. 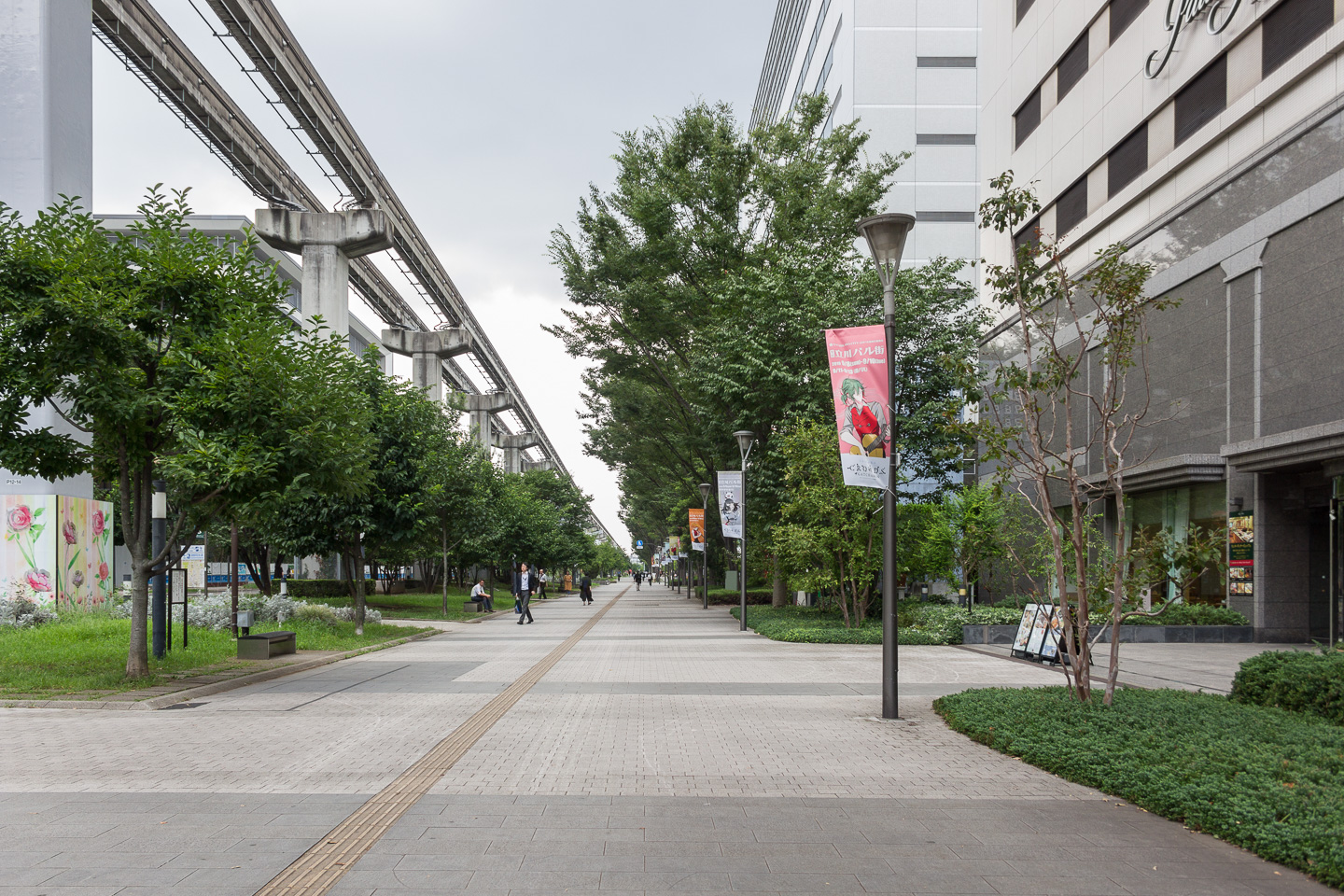 The monorail track is visible in the upper left corner of this picture. It runs north-south through Tachikawa and kind of gives a bit of a “city-of-the-future” vibe when it passes by overhead. You’ll find a selection of restaurants lining this wide pedestrian path extending north from the station. Photo: Scott Kouchi

There are a few different libraries in Tachikawa, but the Shibasaki Library (connected to an Elementary School) is across the street from the Shibasaki Learning Center. Cafes can be a great spot to get some work done, but you can really get your study on in a library. It’s just something to keep in mind before making the move to any location! 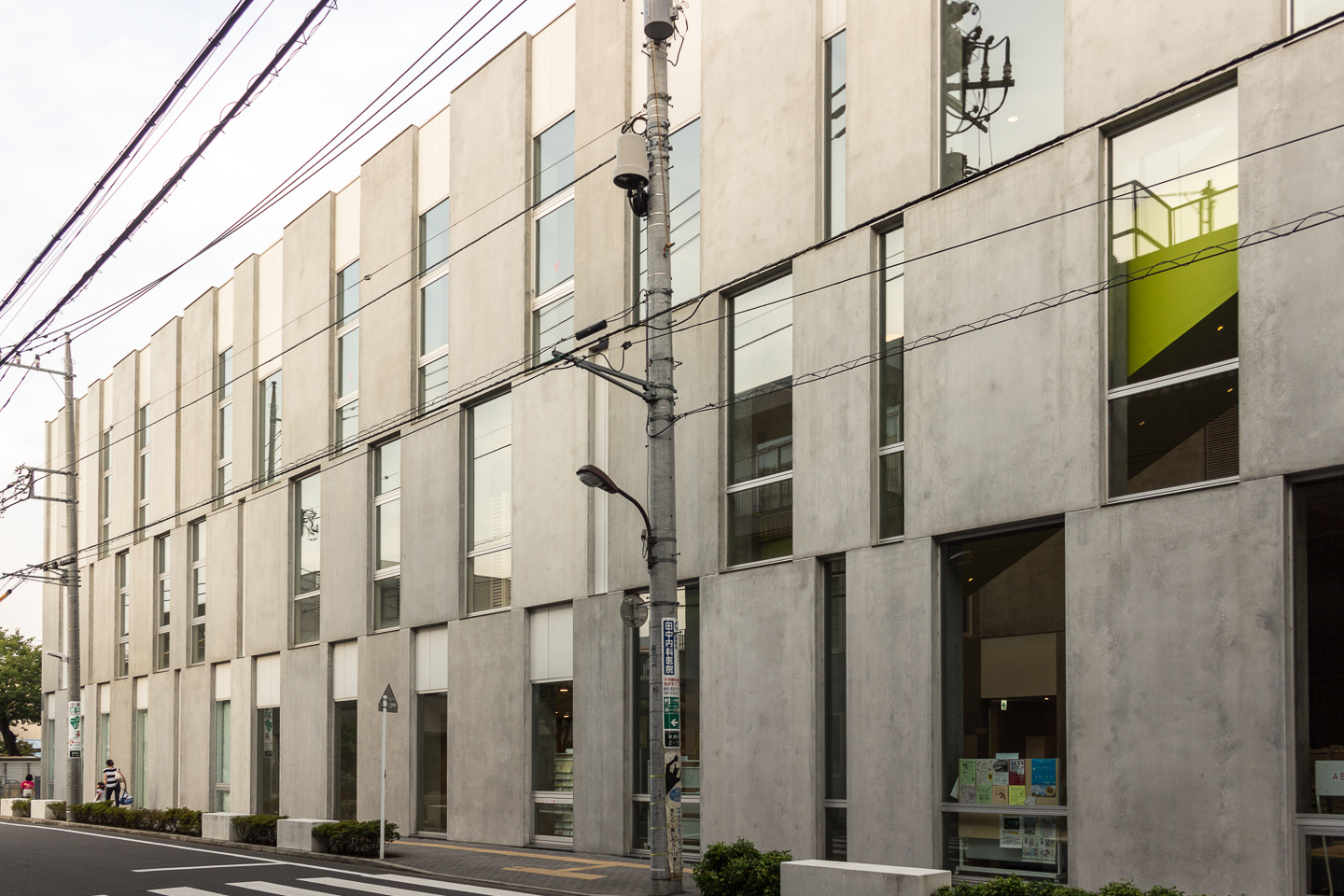 Shibasaki Learning Center (as well as the library) were recently rebuilt with modern designs. The very clean, welcoming designs of these spaces create an inviting area where you can quietly and calmly get some work or studying done. Photo: Scott Kouchi

Who is this area ideal for?

If you are going to work or school around west Tokyo, Tachikawa offers a lot of conveniences of the city without needing to trek to Shinjuku/Shibuya. That being said, if your work is close to downtown Tokyo, you might be better off by looking for a place to live that won’t subject you to a grueling commute. Everybody’s living wants/needs are different though, and there are plenty of people who choose to commute from Tachikawa to downtown Tokyo.