Takadanobaba exists as a melting pot of two distinct communities: it's a commuter's hub for those in west Tokyo coming in on either the Seibu Shinjuku or Tozai (and Chuo-Sobu) lines and a college town (anchored by Waseda University). This eclectic combination of populations gives the area a unique feel and energy, especially due to the large number of cheap bars and restaurants that you can find.

Highlights
-- Home to a number of universities and colleges, including prestigious Waseda University and many Japanese language schools.
-- College town vibe.
-- Izakayas and restaurants tend to cater to students, which means you can always find affordable dining options.
-- Lively nightlife in Sakae Street.


Takadanobaba Station is located in the northern area of Shinjuku Ward. Adjacent to Shinjuku Ward to the north are Bunkyo and Toshima, to the east is Chiyoda, bordering the south are Shibuya and Minato, and you’ll find Nakano to the west of Shinjuku.

Historically, the area of Takadanobaba was referred to as Totsuka, and today you’ll still see traces of this previous area name. For example, Shinjuku City Hall has a separate office near Takadanobaba Station called the Totsuka Special Office. The name of Takadanobaba comes from when the land was used for horse riding and horse racing in the early Edo period. The land was owned by a family named Takata, and the word baba means “horse area.” Today, you might hear some youngsters refer to the area as just “baba” to cut down on syllables to sound as hip as possible.

Apartments For Rent in Takadanobaba 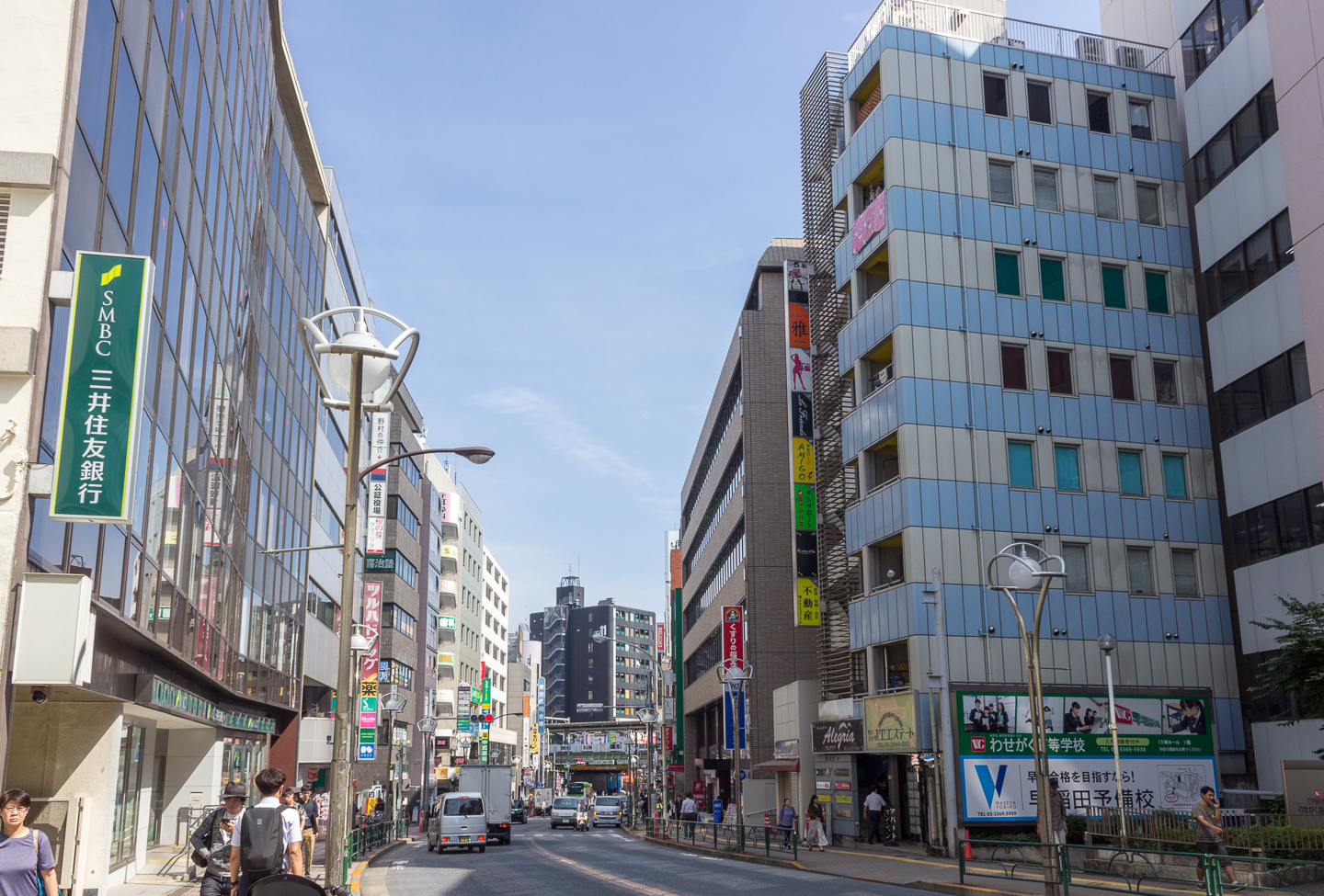 Waseda Street cuts through Takadanobaba – you’ll find plenty of restaurants and businesses lining the street. If you follow it east of Takadanobaba Station you’ll make your way to Waseda University. Photo: Scott Kouchi

When arriving at Takadanobaba Station, you’ll find that there are a few options for exiting the station. Basically, it boils down to exiting to the heavily trafficked Waseda Street or to the smaller streets towards the south of the station.

With the handful of universities and colleges located nearby, you’ll notice that Takadanobaba has a bit of a college-town feel. Most of the cafes and restaurants around the area are tailored for a student’s needs and budget. You’ll also find establishments geared towards those stopping for a quick drink in the evening after a day’s work. 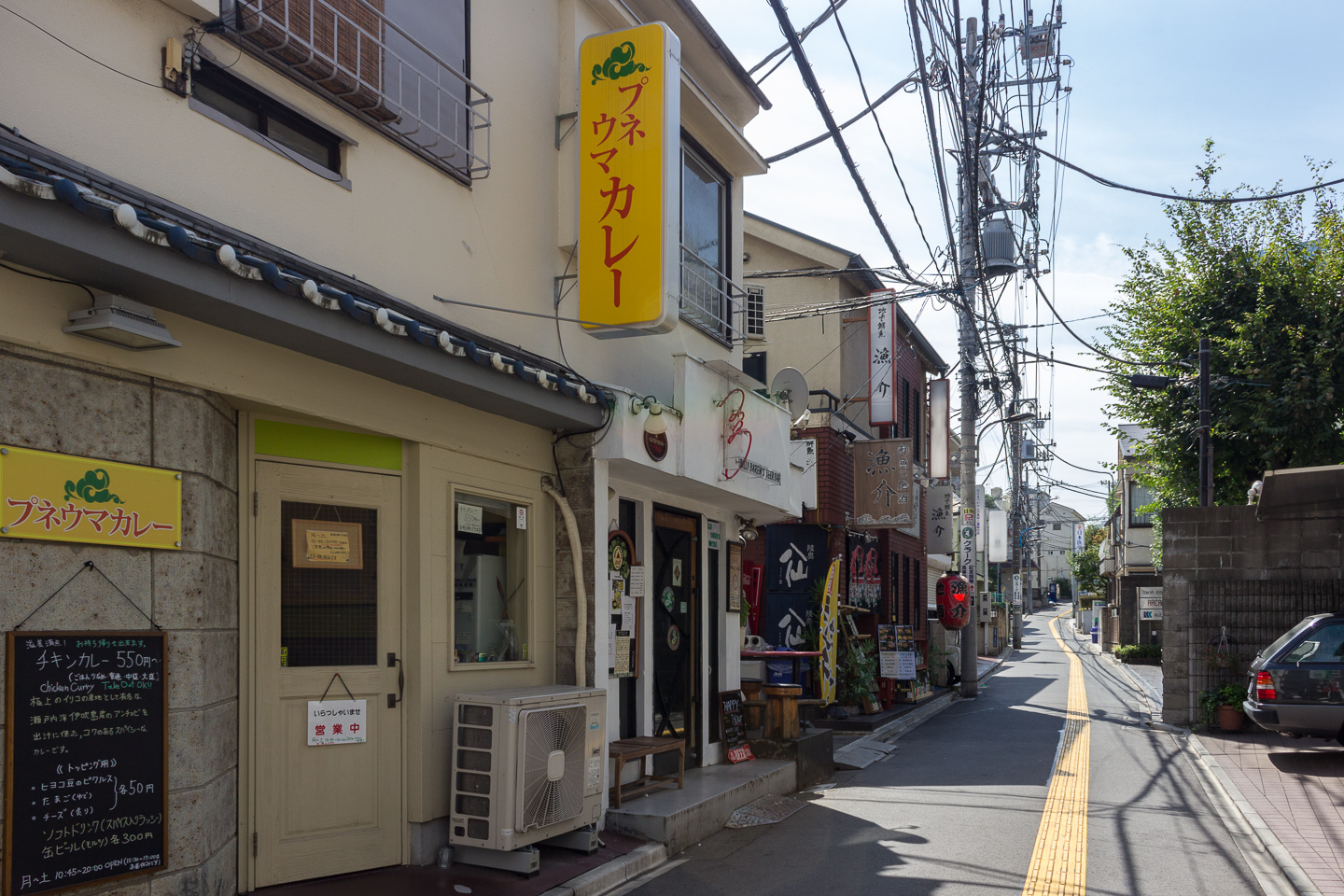 Once you get a little bit away from the station, you can find pockets of Takadanobaba which reflect a more vintage-Tokyo aesthetic. Photo: Scott Kouchi

Blending Past and Present Tokyo

Although Takadanobaba is located in Shinjuku City, parts of the area haven’t been swept up in as much redevelopment, especially compared to the glitz and glamor around Shinjuku Station. Just a short walk from the station, you can almost feel transported back in time down some of Takadanobaba’s retro streets. If this kind of vibe is your calling, you might be more interested in the Yanesen area in north Tokyo, which is famous for holding onto the traditional old-school Tokyo environment. But Takadanobaba blends this retro atmosphere with the lively energy of a college town that’s just a few minutes ride to the “bright lights and big city” of Shinjuku. 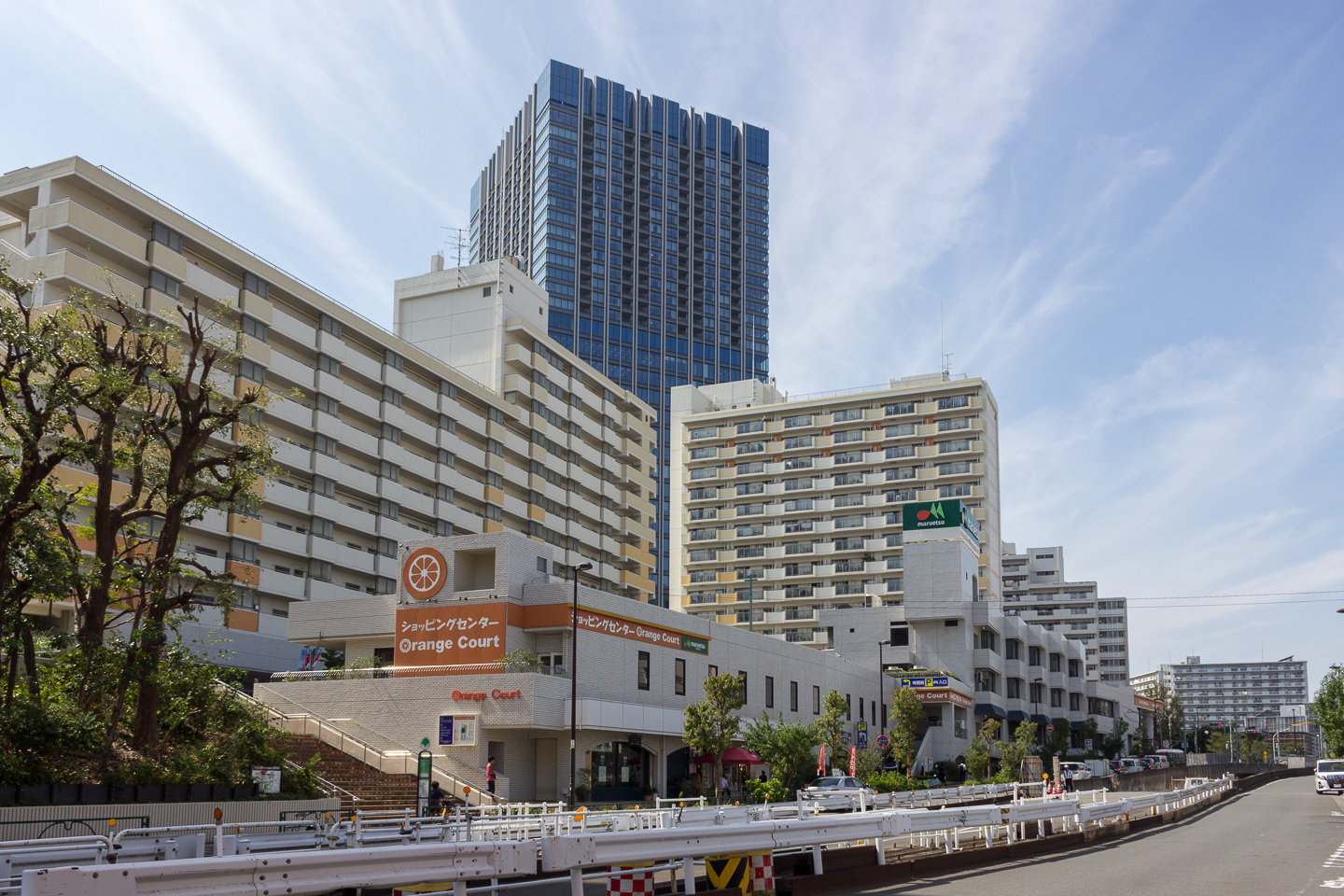 Roughly a 10-minute walk from Takadanobaba Station is Orange Court. It’s a small shopping center connected to a Maruetsu supermarket, providing residents in the area with a convenient one-stop-shop location. Photo: Scott Kouchi

It’s All Fun and Games at Bigbox Takadanobaba

Takadanobaba would be bereft of a department store or shopping mall if it weren’t for the Bigbox shopping plaza right next to the east of the station (outside the Waseda Exit). This building is where you’ll find the Seibu Fitness Club gym, a bowling alley, a video game arcade, and a selection of chain restaurants. This adds an entertainment aspect near the station. You can also scratch your itch for excitement by hopping on the train to Shinjuku or Ikebukuro (either station is just 5 minutes away on the Yamanote Line).

Indulge Your Frugal Side

Near the station is also Shinjuku Recycle Katsudo Center, where flea markets are held. These only happen twice a month though, so you’ll have to plan ahead when you want to browse some deals on used goods. You can also donate your old clothes or appliances to be sold here as well.

As the fictional birthplace of the extremely well-known character Astroboy (known in Japan as 鉄腕アトム or Mighty Atom), you will notice a large, detailed mural across the Waseda Exit of the station dedicated to Astroboy and his friends. Since 2003 (the fictional year of Astroboy’s birth), the station has played an Astroboy-themed tune when alerting passengers that doors are closing. 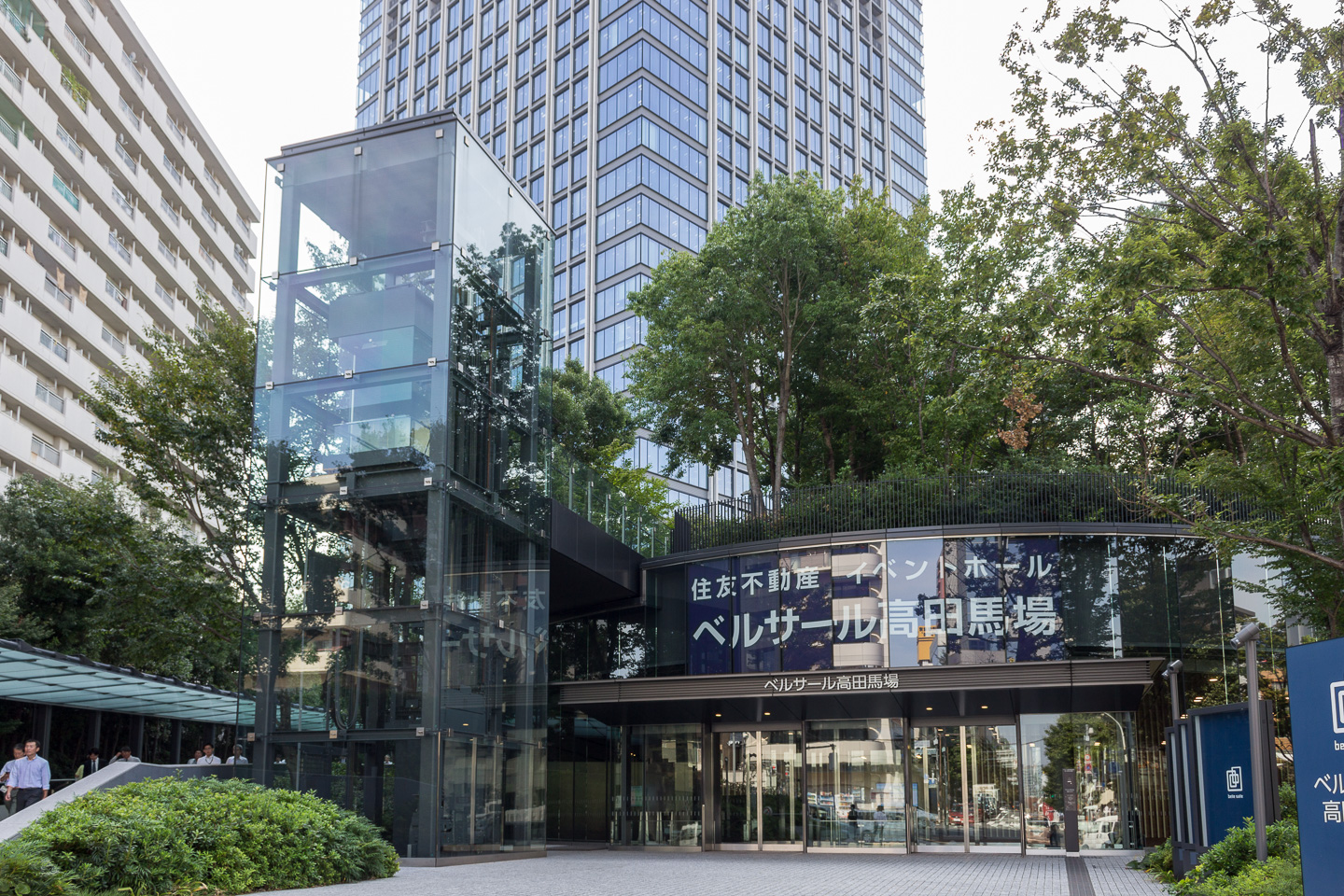 Various events are held at the Bellesalle Event Hall, including beer festivals, video game tournaments, and research conventions! It’s also next to Toyama Park, a nice open location for getting some fresh air! Photo: Scott Kouchi

Takadanobaba is also considered a haven for ramen lovers. You’ll find a wide variety of shops in the area serving their take on the dish! You can have your choice of Sapporo-style ramen at Raiden, a hearty roast beef and ramen combination offered at Dogen, or a unique fried-noodle take on ramen prepared at Tsurugi. For those looking for ramen that isn’t as heavy, Tori Paitan Kageyama serves a lighter, chicken-stock based broth with fresh vegetables – particularly popular with women!

One obscure feature of Takadanobaba is that it’s a popular destination for Tokyo residents who play trading card games. In particular, the Hareruya Tournament Center is where players come to play games with each other, most notably for games of Magic: The Gathering. 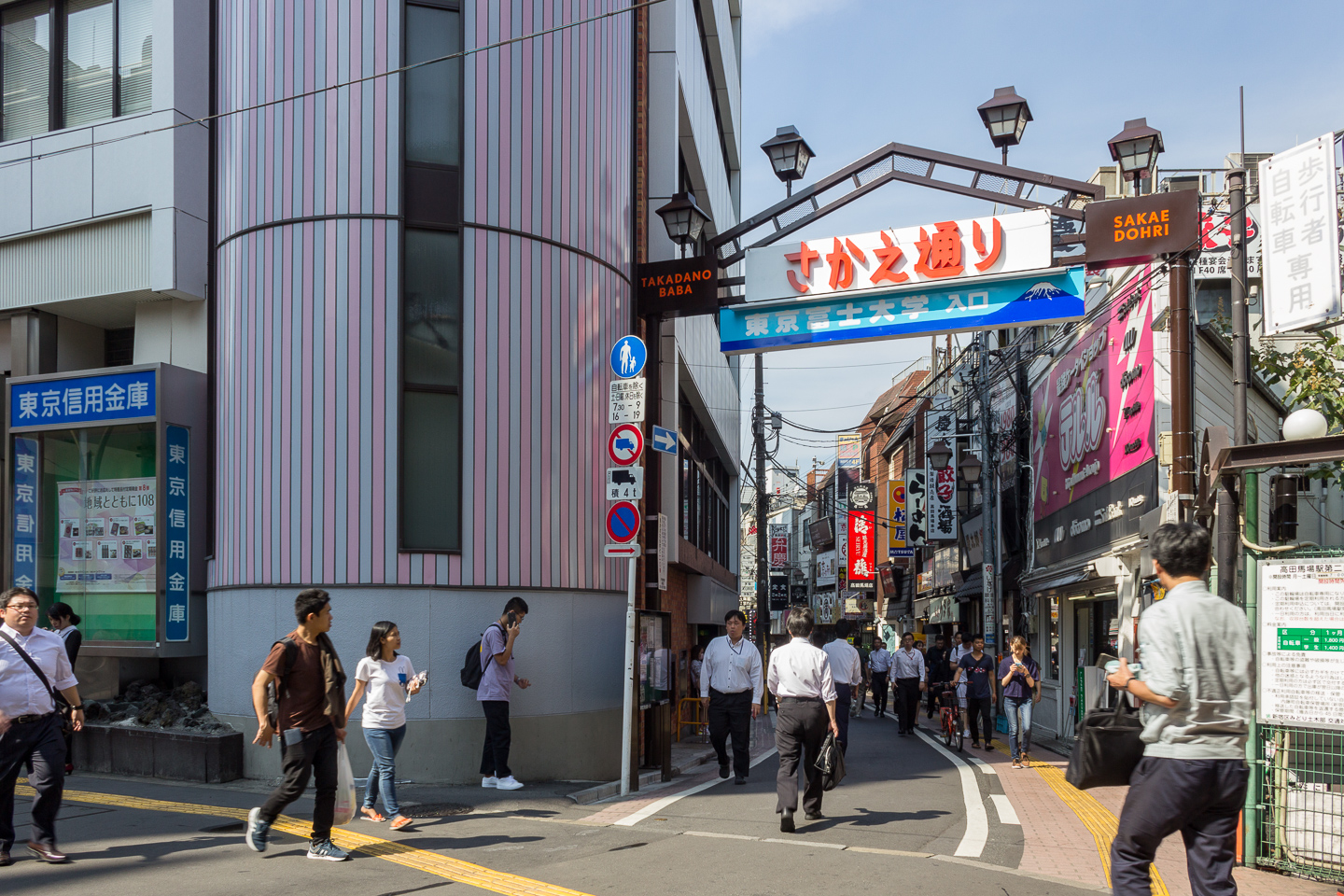 Right across from the Waseda Exit of Takadanobaba Station is the entrance to Sakae Street. You can even see how densely packed the izakayas are in this picture! Photo: Scott Kouchi

In all honesty, Takadanobaba probably doesn’t rank highly on most livability factors for families. The high number of bars in the area tends to result in quite a few drunken rabble-rousers in the evening and night. Most of the establishments are also geared towards university students or commuters, so it can be difficult to find family-friendly entertainment near the station.

However, if you are single you might love the diversity of cheap bars and restaurants in Takadanobaba. The lively nightlife might also be something that is right up your alley, especially if you’re a student.

This area might be an option for couples who want to live on the Yamanote Line, but it might be difficult to find alone time to just relax together since this is a relatively active area. However, if both of you love the energy of city life you might want to consider Takadanobaba.

Apartments for rent near Takadanobaba Station:

Apartments For Rent in Takadanobaba