Ueno is an entertainment district found in Taito Ward. Within the neighborhood is the massive Ueno Park, a very popular spot for tourists and locals to visit. A wide variety of attractions including museums and temples are in the park, along with the Ueno Zoo. The area can feel chaotic and overwhelming with crowds of people, but if you want to take advantage of the great transportation options from Ueno Station you might have to learn to get used to this.

Located in Taito Ward, Ueno is one of Tokyo’s larger transportation hubs and the area is very well-known as an entertainment district. With the expansive Ueno Onshi Park as one of the area’s major destinations (both for tourists and residents), there is a lot of foot traffic around the station. Another feature of the Ueno neighborhood is Ameyayoko Market, a stretch of the street with open markets, izakayas, and shops catering to tourists.

Ueno as a neighborhood tends to fly a little under the radar in terms of livability within Tokyo. You’ll have to be very comfortable with crowds and city-life if you want to make this neighborhood your home. But, the fantastic transportation options and shopping/entertainment in the area make this one of the most sought after areas for short-term rental apartments for visiting Tokyo!

There is almost no end to the shopping, dining, and entertainment options available in Ueno, and in fact, Ueno is a popular location for a short term stay in Tokyo. Searching around the nearby stations of Inaricho and Iriya will also bring up short-term apartments with great value – close to the shopping and dining in Ueno! 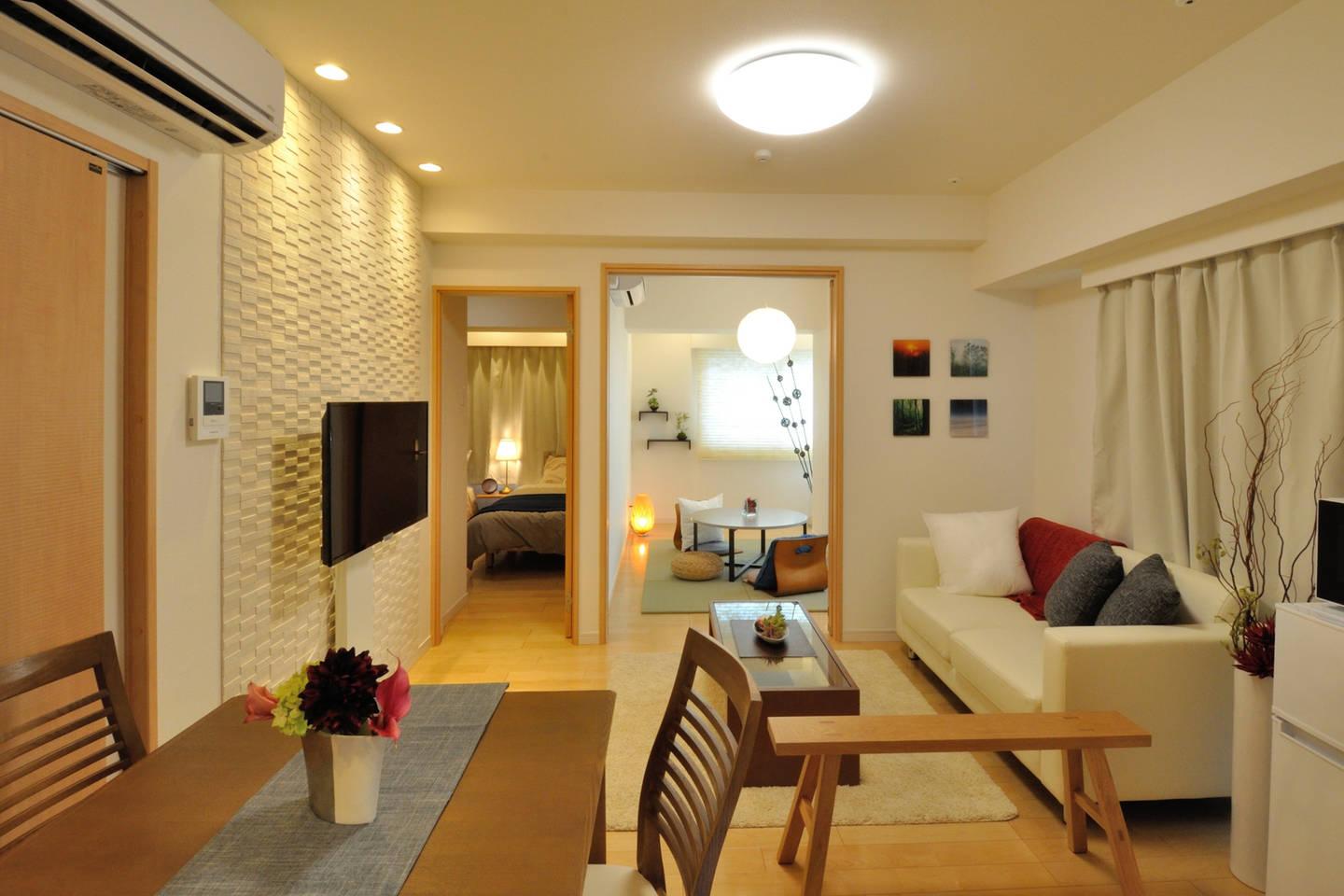 Here’s an example of a short-term furnished apartment in Ueno. By using Ueno Station as a home-base for your Tokyo trip, you’ll be able to have a direct connection to many other major hubs in Tokyo!

Apartments For Rent in Ueno

*Access to the Keisei Main Line is through Keisei Ueno Station, approximately a 300 m walk southwest of Ueno Station.

With all the different train and subway lines stopping at Ueno Station, you can imagine that this station gets quite busy. Let’s take a look at this station level by level.

Living near Ueno Park is a blessing and a curse. On one hand, not every neighborhood has such great access to a sprawling open space for picnics, jogging, and relaxing away from towering skyscrapers. But, because of the many attractions of this particular park, it does tend to be busier than what one might be looking for in an urban oasis. Ueno Park is home to the Tokyo National Museum, Tokyo Metropolitan Art Museum, Ueno Royal Museum, Ueno Zoo, and Shinobazunoike Bentendo Temple. 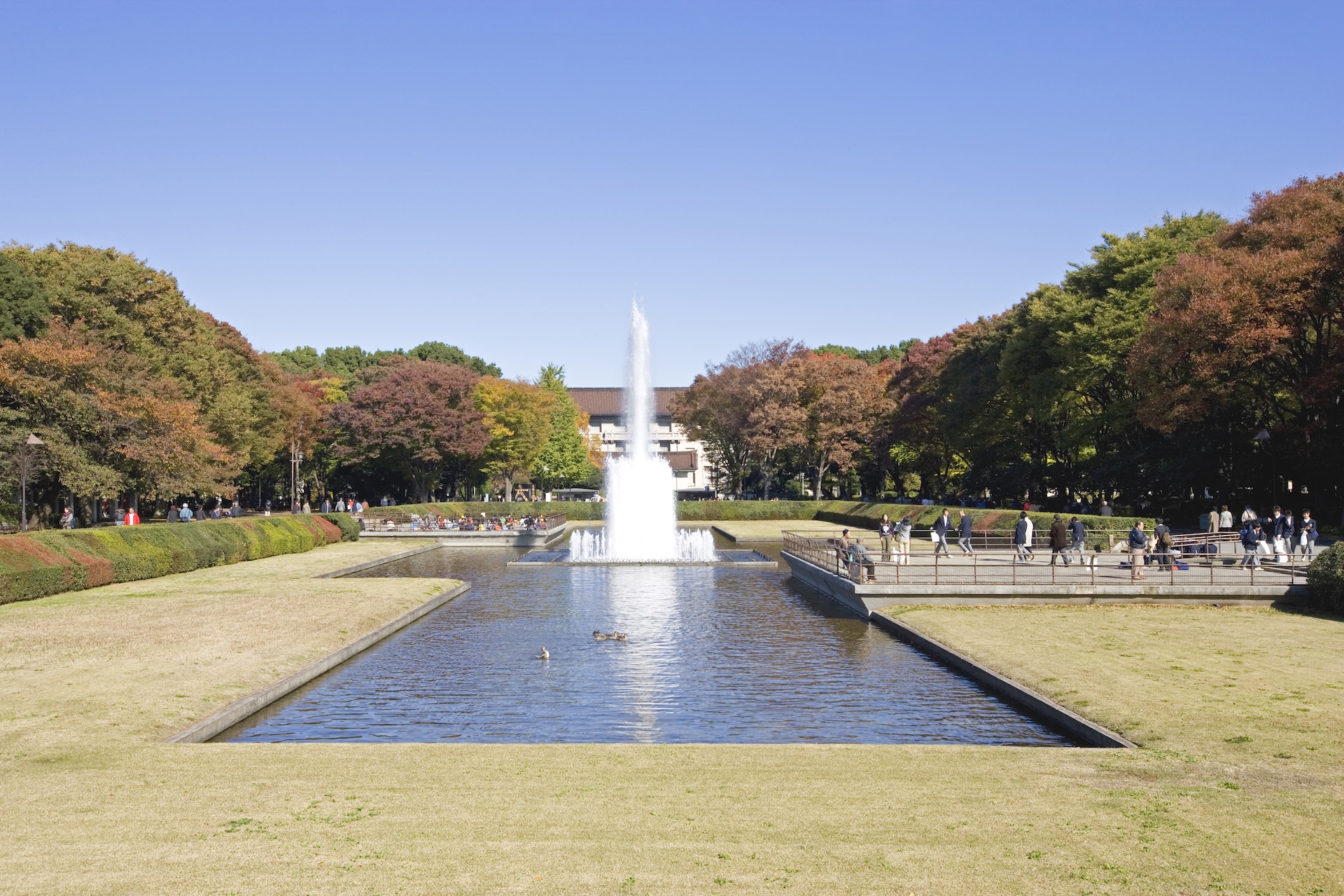 The park also hosts many events throughout the year. With its large open space, many booths can be set up for park visitors to browse on any given day. From the annual hanami (cherry blossom viewing) picnics to annual international friendship events (Thai Festival, Pakistani Festival, etc.), you’ll be able to check out any events that make their way through Ueno Park.

This high concentration of sights to see draws in a fair share of tourists (both international and Japanese). If you’re okay with crowds and a little bit of that “city that never sleeps” atmosphere, then Ueno could be right up your alley. 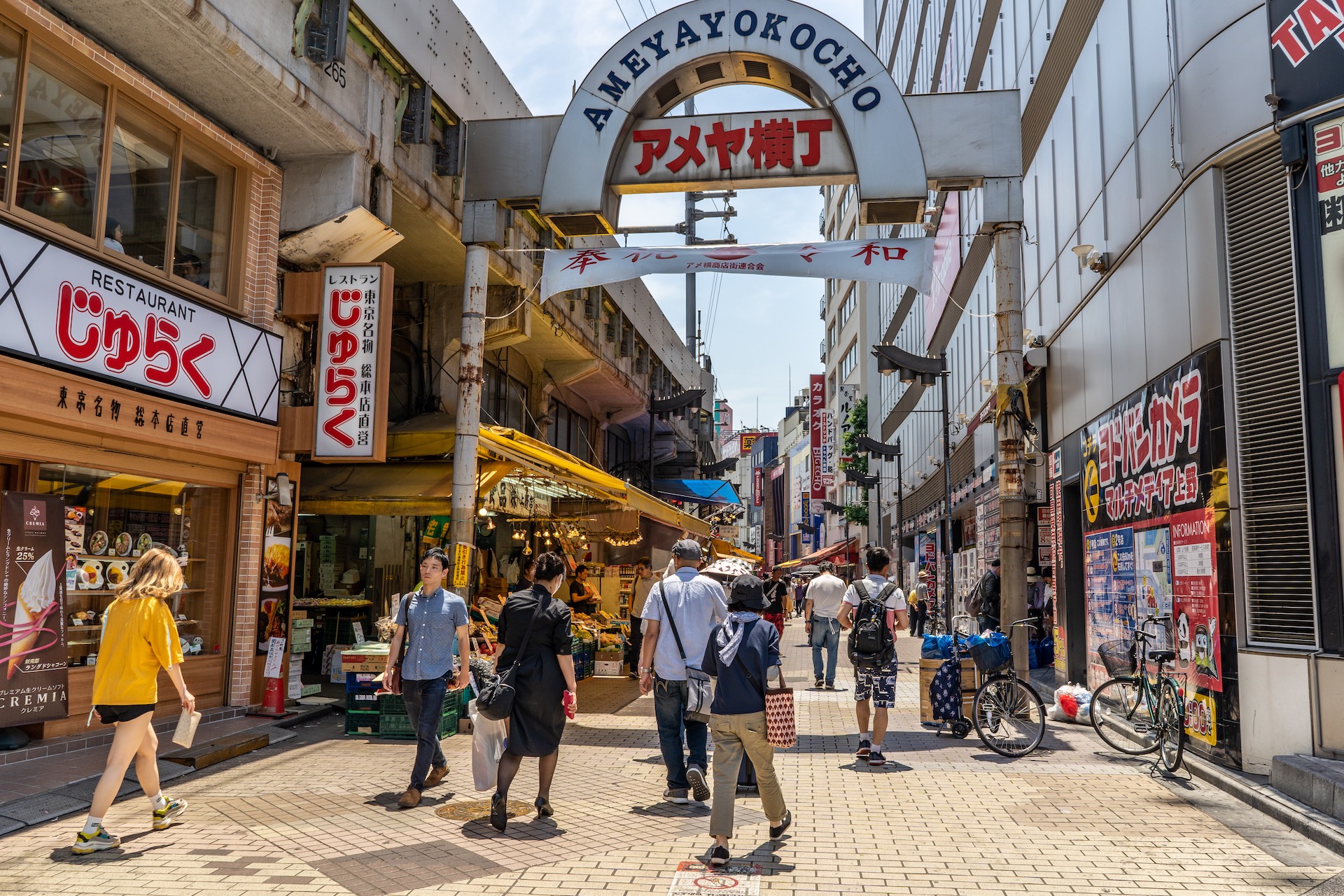 Ameyoko is an often busy marketplace, where you can find a wide variety of stores and restaurants. Photo: iStock stock photography

More well-known by its abbreviated name, Ameyoko, this stretch of road in Ueno is a dense cluster of markets and izakayas. When the weather is nice, it’s very common to see establishments utilize the space in front of their shops, giving Ameyoko an open-air market atmosphere.

If you venture into the depths of the markets you’ll find some very affordable imported foodstuffs. The markets on ground level and in the basement level of many of the buildings are packed with a wide variety of spices (especially for cooking Chinese, Korean, and Southeast Asian cuisines) that you won’t find in regular Japanese supermarkets.

The exact origin of the name has been lost to time, but there are two theories as to how Ameyayokocho was named. The Japanese word for candy is ame (飴) and combined with the word for store becomes ameya (飴屋). The legend goes that the name came about from the candy shops that are said to have popped up in the area during the postwar era. The second theory is that the name comes from abbreviating the Japanese romanization of America (amerika, アメリカ) since there used to be stores selling American military surplus goods on the streets.

Ueno is filled to the brim with restaurants, so foodies who love exploring the tastes of Tokyo will find this area to be an absolute delight. There’s no shortage of top eats in Ueno, so here’s our take on a few gems that you can find here. Yamabe is a tonkatsu (deep fried pork cutlet) restaurant with juicy cutlets and a crisp panko breading. Yoseya is a Japanese seafood restaurant with some large portions that are surprisingly wallet-friendly. Near the station is Taimeiken, a nostalgia inducing (well, if you’re Japanese) postwar era eatery serving up classic Japanized western food like omuraisu (omelette over rice).

The topic of living in a very busy, heavy-traffic area like Ueno is polarizing. Either you love the idea of being plugged into the depths of downtown Tokyo on a daily basis, or you need space to get away from the sensory overload.

With the emphasis on entertainment, the neighborhood can be fun for a single apartment hunter, particularly for men. Families and women might not feel as safe in the area. Ueno is one of the few locations in Tokyo with a sizable homeless population. You will probably find a few areas around Ueno Station and Ueno Park where people have set up temporary shelters.

The fact of the matter is that you’ll be constantly bombarded by crowds of people when trying to get anywhere around the station. On the plus side, you’ll have practically immediate access to a wide variety of entertainment and shopping options. In addition, rent in the area tends to be a little cheaper than that of rent around other similar downtown areas like Shibuya and Roppongi.

Ueno can be a great area for students or those staying in Tokyo for a short term (those coming to Japan for working holiday) because of the sheer amount of things to do and see in the area.

Ueno is an extremely popular location for tourists from Asia, particular Chinese tourists. Residents jokingly remark that sometimes they forget they’re in Japan when walking around since sometimes all they hear is Chinese.

Apartments for rent near Ueno Station:

Ueno stands toe-to-toe with other downtown entertainment districts such as Shibuya, Roppongi, and Ikebukuro in terms of sights to see and things to do. Browsing the Real Estate Japan listings in Ueno, you can find studio apartments starting at around ¥70,000 per month. This is a bargain for a location with such density of attractions and shopping available. If you’re looking for more space, check out the listings for 1LDK apartments in Ueno which start at around ¥140,000 per month!

Apartments For Rent in Ueno