What is the average price of a new house in Japan?

In this article, we take a look at the average price of a newly constructed house in Japan by major region and city, based on data from Tokyo Kantei.

Before we drill down to the regional data and most and least expensive markets, let’s take a quick look at why the new home market in Japan is so unique.

Uniqueness of the New Home Market in Japan

One of the most conspicuous characteristics of the new home market in Japan is that newly-built homes lose value quickly and are rarely used longer than 20 to 25 years before being demolished.

Because everyone expects new residences to lose value so rapidly (due to the lack of a secondhand market, among other reasons), for many years developers have had little incentive to build houses that would retain quality in the long term.

Despite this, the government has long promoted the market for new homes over the market for existing homes to benefit from the greater macroeconomic effects gained from new land development, the design and construction of new buildings, etc.

As a result of this policy, combined with post-WWII demographic trends and (some would argue) a cultural preference for “new” things over “old” things, the overwhelming majority of residential sales in Japan are in the new home sector. In 2013, 85.3% of all residential sales in Japan were sales of hew homes, according to the Ministry of Land, Infrastructure, Transport and Tourism (MLIT).

This is the exact opposite of the residential market in the United States and United Kingdom, for example, where transactions in existing homes outnumber sales of new homes by about 10 to 1.

Against the outsized importance of new home sales, is the growing problem of vacant and abandoned houses nationwide.

This is about 13.5% of the entire residential stock and a much higher percentage than for other countries.

Without new measures, Nomura Research Institute has estimated that an astounding 30.4% of all residential buildings will be abandoned by 2033.

In view of Japan’s long-term population decline, the government publicly recognized in 2006 that future government policy should focus on promoting housing quality (rather than quantity), and in 2010 the government formally announced its goal of doubling the size of the market for used and/or renovated houses in the next ten years.

Price of a New House by Region and Major City

Now let’s take a look at the average price of a newly constructed house by region and major city.

Unsurprisingly, the most expensive place to buy a new house in Japan is the Tokyo 23 Wards.

The average price in the 23 Wards represented not only a year-on-year increase of 13.3% and but is also the highest recorded since April 2014.

The least expensive market in May was Fukuoka Prefecture, on the southern-most island of Kyushu.

Please see the charts below for detailed data by region and major city. 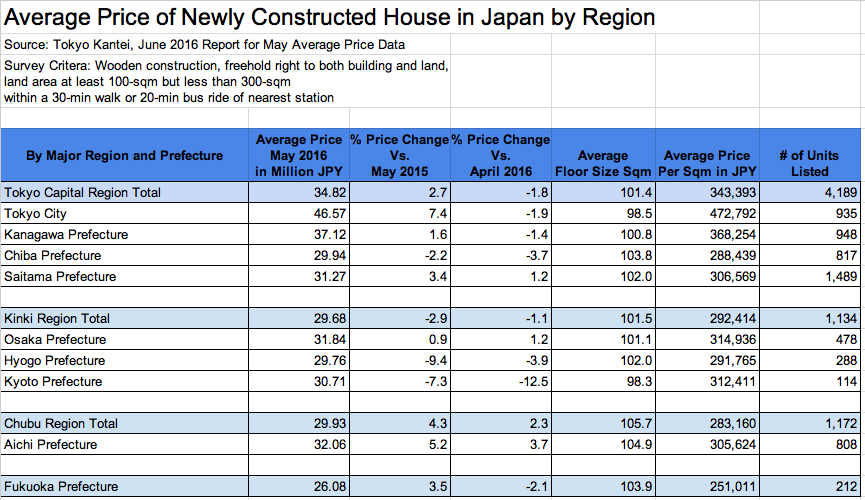 Average price of a new house in Japan, May 2016. Source: Tokyo Kantei

Average price of a new house in Japan by major city, May 2016. Source: Tokyo Kantei

You may also be interested: Average price of an apartment in Japan by prefecture