This upward trend in listing prices for family-type condominiums that are at least 70-sqm (754-sqft) in floor size, as opposed to smaller units purchased for investment purposes, reflects how prices have risen as the market is recovering from pandemic lows.

Record-setting sales prices for newly constructed apartments are the result of high land acquisition costs and a shortage of labor in the construction industry. Japan’s historically low interest rate environment has also been a key consideration when people are penciling out whether to buy or rent. In 2021, the average sales price of a newly constructed apartment hit a record high of ¥62,600,000 ($490,000 USD).

On the buyer side, consumers are continuing to benefit from historically low mortgage rates and government incentives to purchase homes.

Also, as more and more people are working from home as a result of the pandemic, consumers are looking to buy their own apartment so that they can accommodate telecommuting. Many buyers, especially in Tokyo are double-income households who can afford to bid on higher-end properties near the city center. These various demand factors are propping up high sales prices.

Some people who can’t afford to buy newly constructed apartments are turning to purchasing pre-owned properties.

Average listing prices in the Tokyo 23 Wards are the highest of any metro region, but has price growth been the steepest in the 23 Wards or do other metro areas or cities have a higher rate of growth?

How listing prices have grown in the past six years: In charts

This is how listing prices for pre-owned apartments in the greater Tokyo metro area grew in the past six years, from January 2016 to January 2022. Price growth in the all the cities tracked notably started accelerating starting in January 2021. 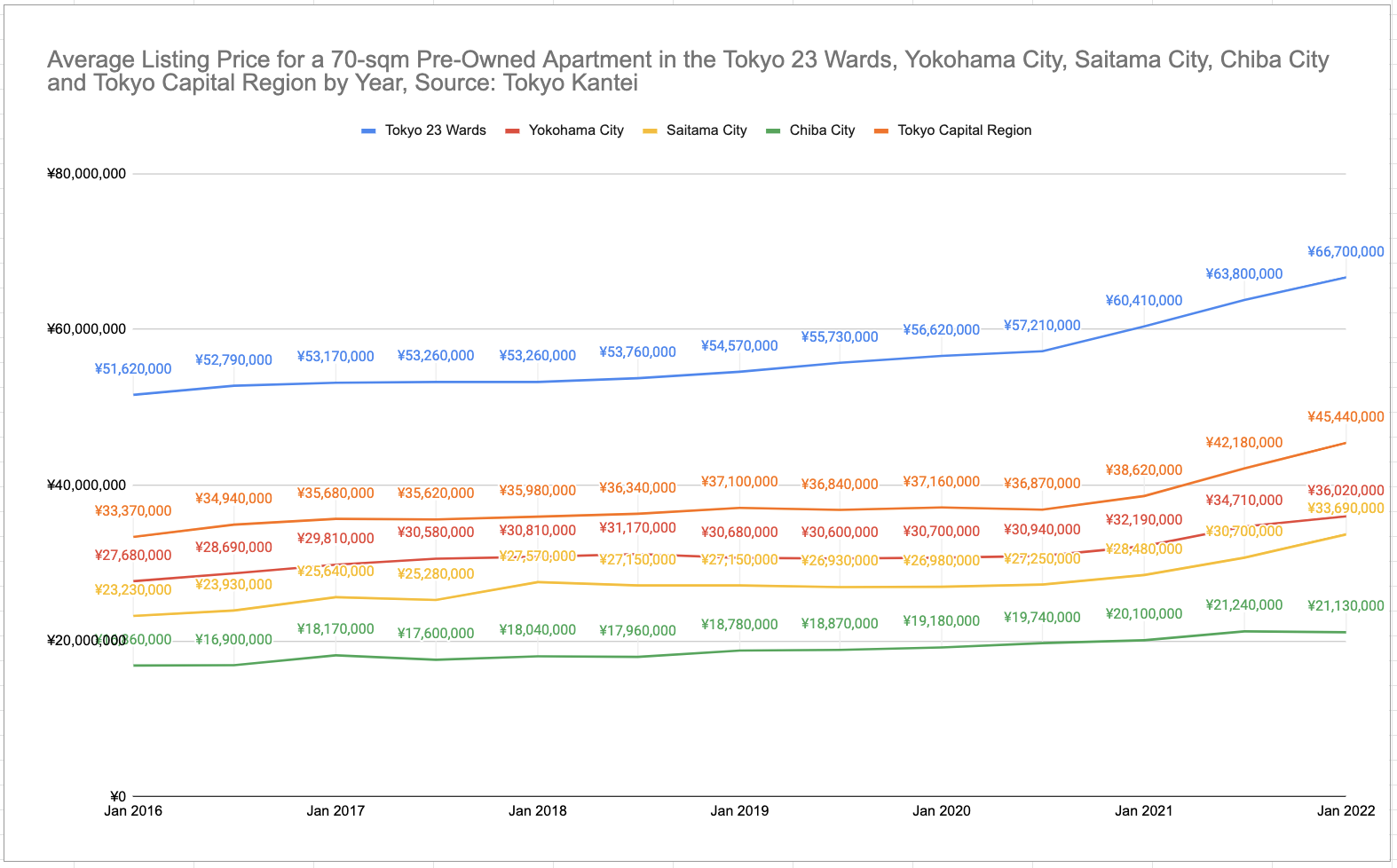 If we look at the percentage change in listing prices for each of the main cities in the greater Tokyo region, some interesting data points stand out.

We see, for example, that prices in Chiba City jumped 2.92% in July 2020 (at the very start of the pandemic) compared to prices in January 2020 (before the pandemic started).

Prices throughout the Tokyo capital region showed strong period-on-period growth starting in January 2021 but the rate of growth has been the highest in Saitama City, starting in July 2021.

Listing prices in the six central wards of the Tokyo 23 Wards are much higher than for the average of the greater Tokyo region as a whole. In January 2022, the average listing price of an apartment in the central six wards was ¥95,310,000. Prices in the central six wards have grown steadily every year in the years analyzed, while prices in the southern and western wards, as well as the northern and eastern wards remained relatively flat until January 2021. 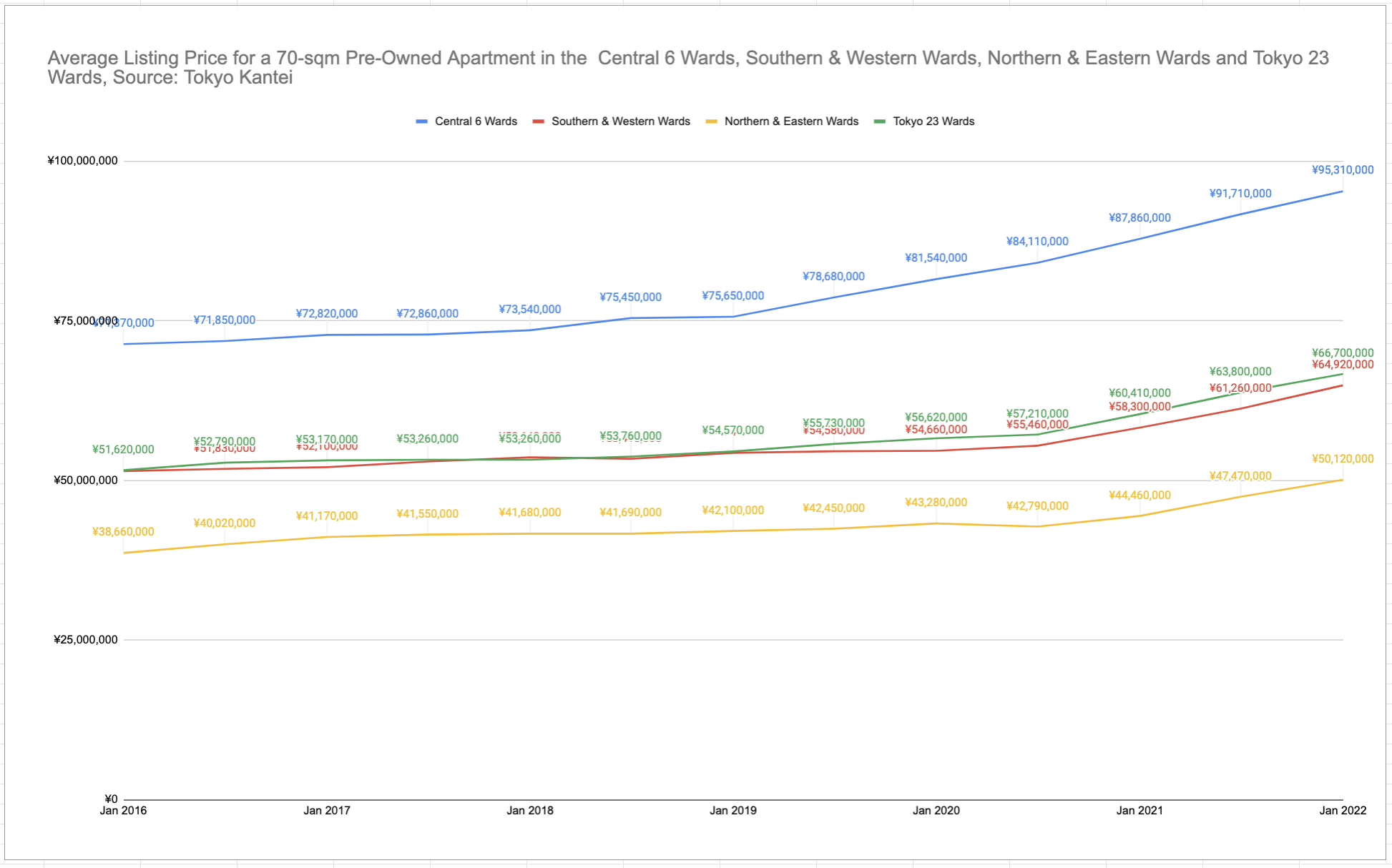 In the chart above,

One point that stands out is that although prices in all areas of Tokyo started accelerating in January 2021 compared to July 2020, in January 2022 the southern and western wards, as well as the northern and eastern wards had much higher rates of growthcompared to the previous period. One reason for this is that listing prices in less expensive wards are starting from a lower base, which means that there is much more room for them to take off.

How have prices grown in other major cities around Japan?

Here is what the chart looks like for some of Japan’s other major real estate markets: Osaka, Nagoya, and Kobe. 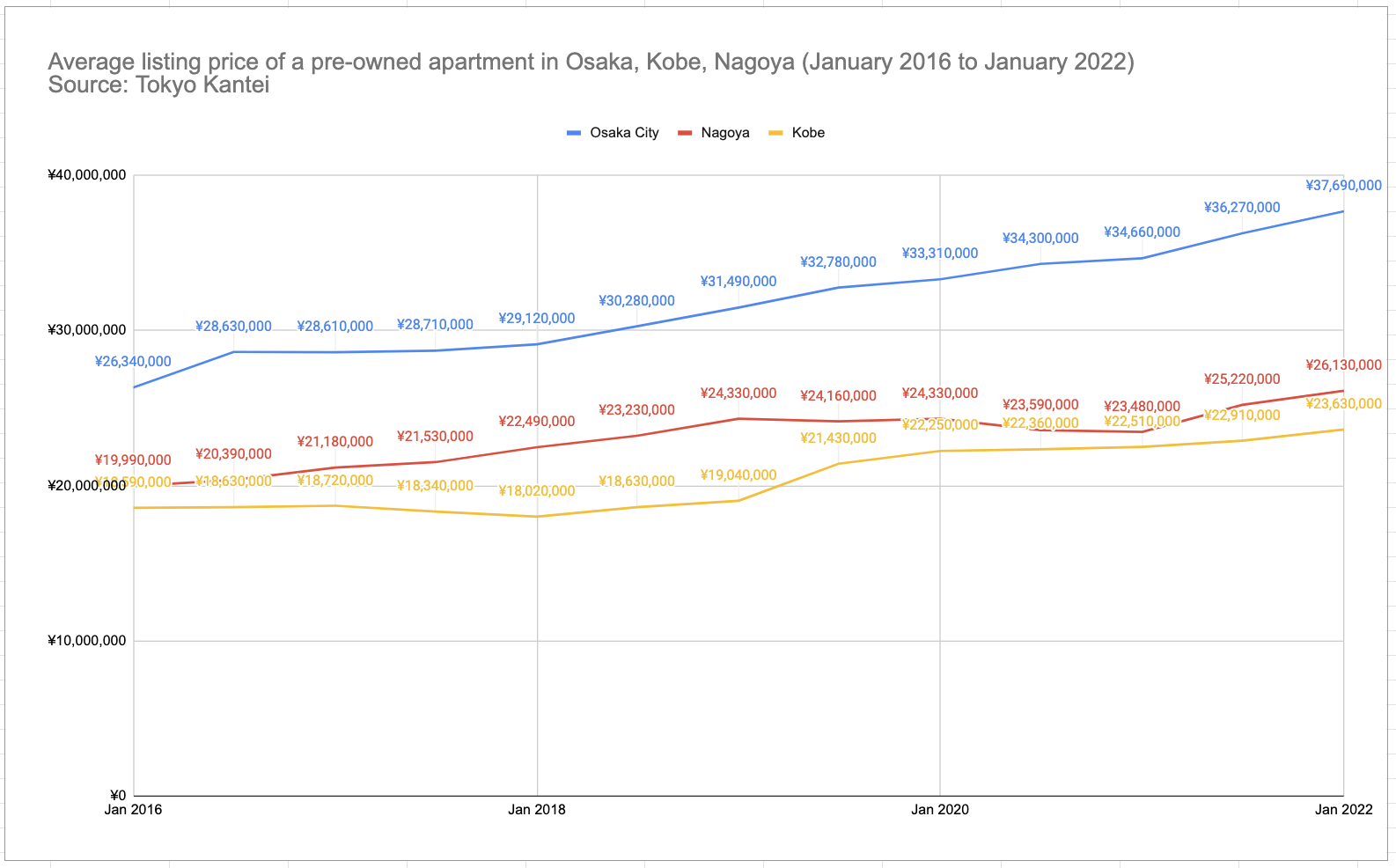 The rate of growth in apartment prices in Osaka, Nagoya and Kobe started increasing later than in the capital region (July 2021 versus January 2021). Nagoya, notably has seen strong price growth starting in July 2021. Prices increased at a lower rate in Kobe.

Where have prices grown the most in the past few years?

If we compare price growth in different metro markets over different time periods, there are some interesting takeaways:

Webinars on Buying Property in Japan

How much does an apartment cost in Osaka – May 2022 Update

How much does an apartment cost in Tokyo – May 2022 Update