Moving From One Apartment to Another in Tokyo

Moving is always stressful. It’s important to pre-plan as much as you can to lessen the stress of relocating your entire life to a completely new environment.

I decided to move earlier this month after I found a really nice apartment. I made the decision on a whim and did not regret it (surprisingly) despite everything being last minute. Because of the nature of my work, I kind of knew more or less how to handle things, so I guess that was kind of a cheat on my end!

I phoned a moving company two weeks prior, and a staff person visited my unit to write me a quote. It was a lot more than I expected, but I didn’t want to damage my nails (lol) nor carry any of my heavy furniture, so I decided to go with them immediately. In retrospect, I could have found a more economical option somewhere. But, oh well. 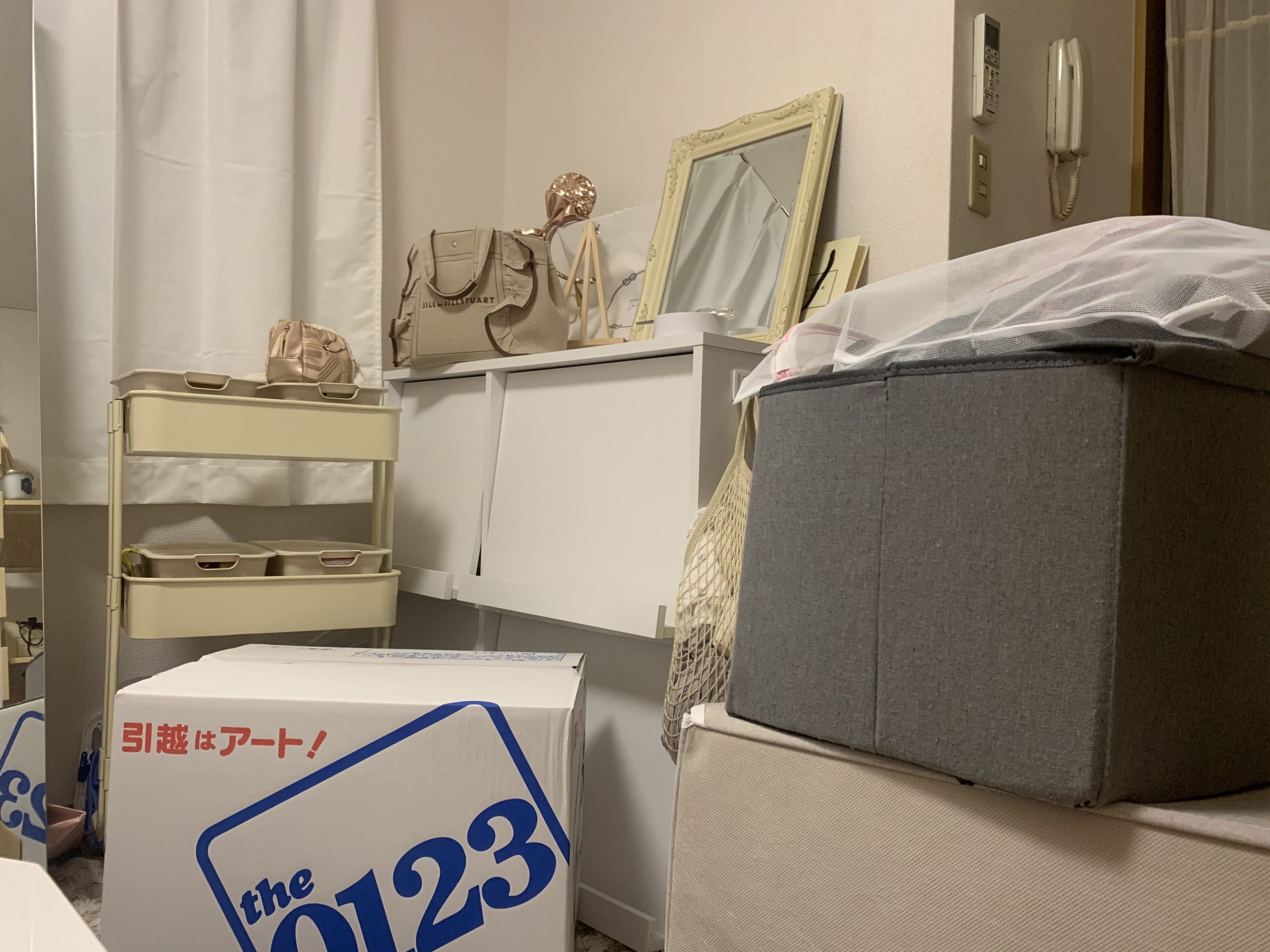 The night before packing. Photo: Cindy 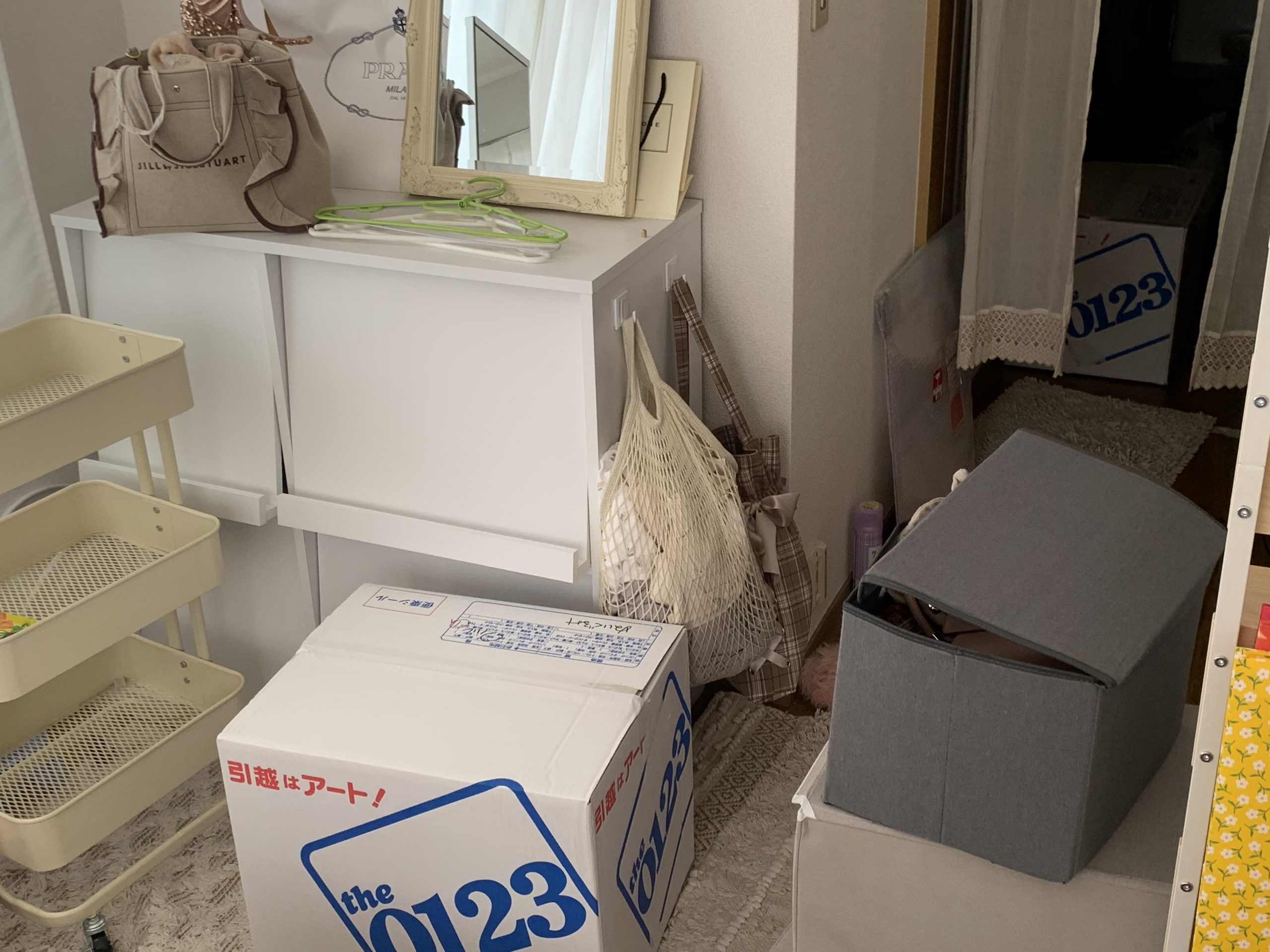 The night before packing. Photo: Cindy

The moving company I went with was Art Hikkoshi Center. They offer English support as well!

For more on this, please see: List of English-friendly moving companies in Japan: From Inexpensive to Full Service

I went for the plan with a packing service option but chose to put some of my clothes and important possessions away first.

My old apartment had always been tiny, and having boxes everywhere made it even harder to navigate inside. I was fine living inside a compact room for the most part, but ever since I started cooking more for quarantine, I’ve started to want more space, especially for the kitchen. And that was why I decided to move. 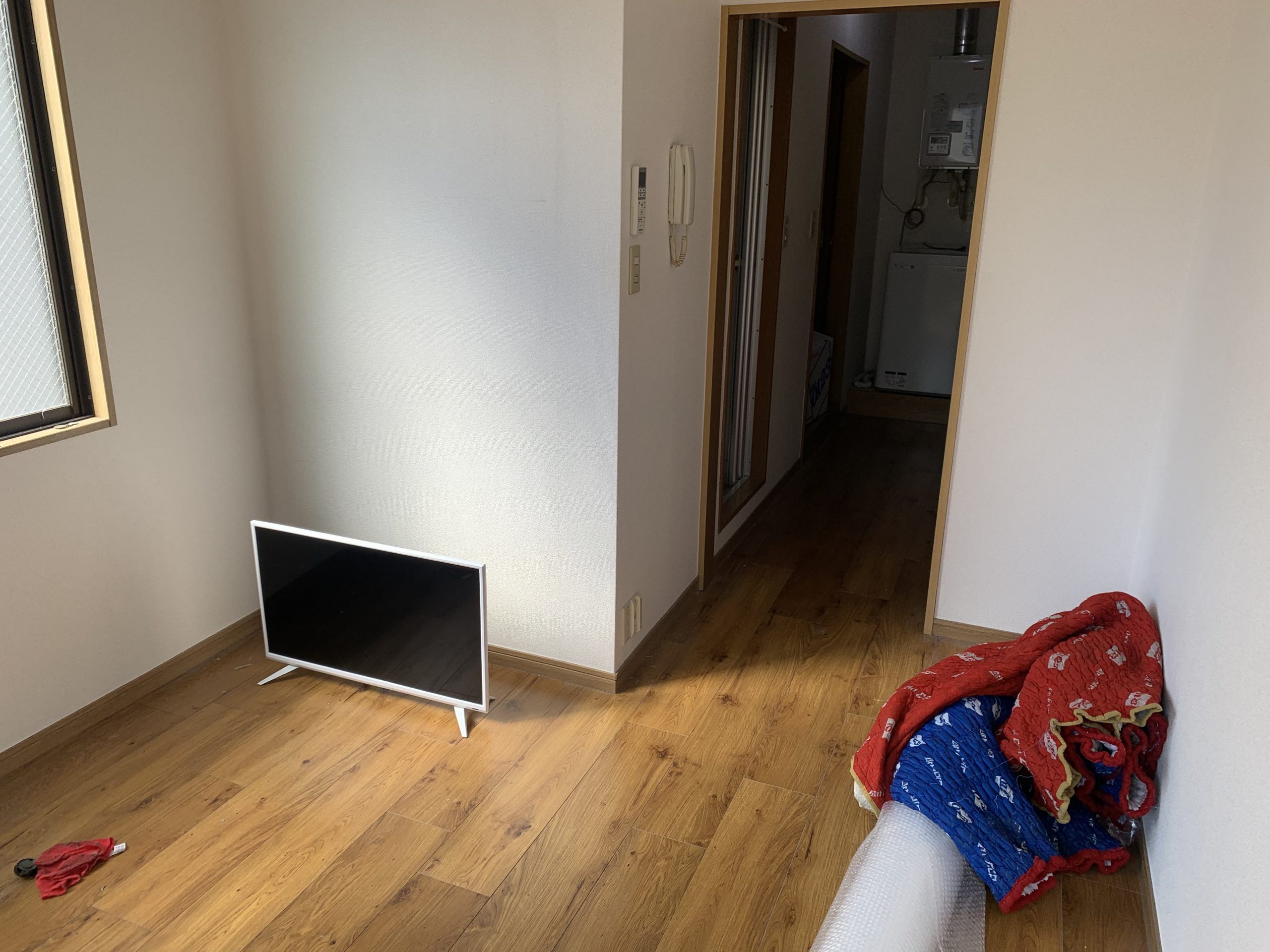 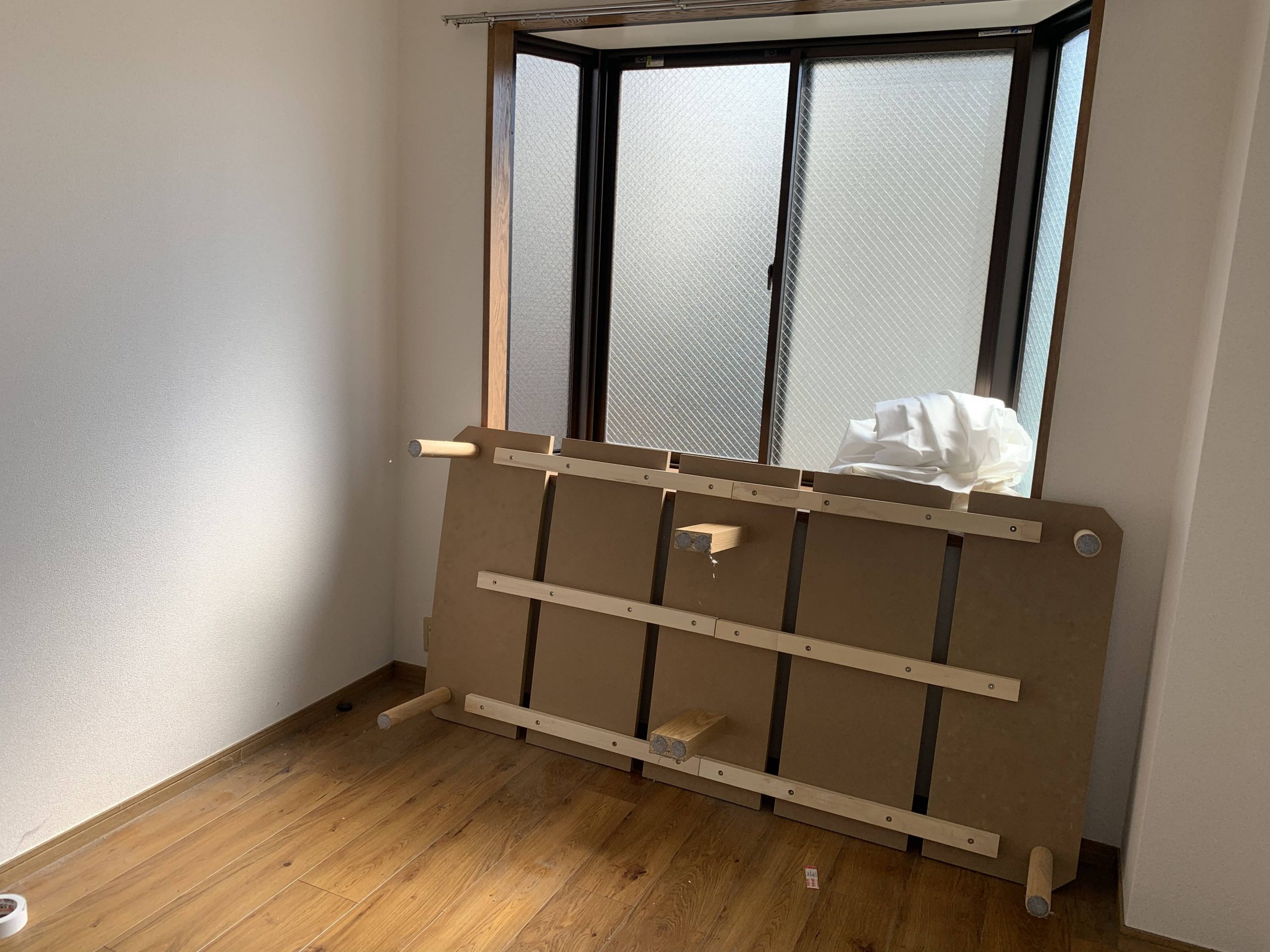 The movers came the next day and carried out most of my things in less than two hours. I was surprised at first but thinking about it now that they worked that quickly.

It was admittedly very odd seeing the room I’ve spent almost two years in bare and empty. Oddly, it felt a lot smaller than when I’d filled it to the brim with all of my stuff. 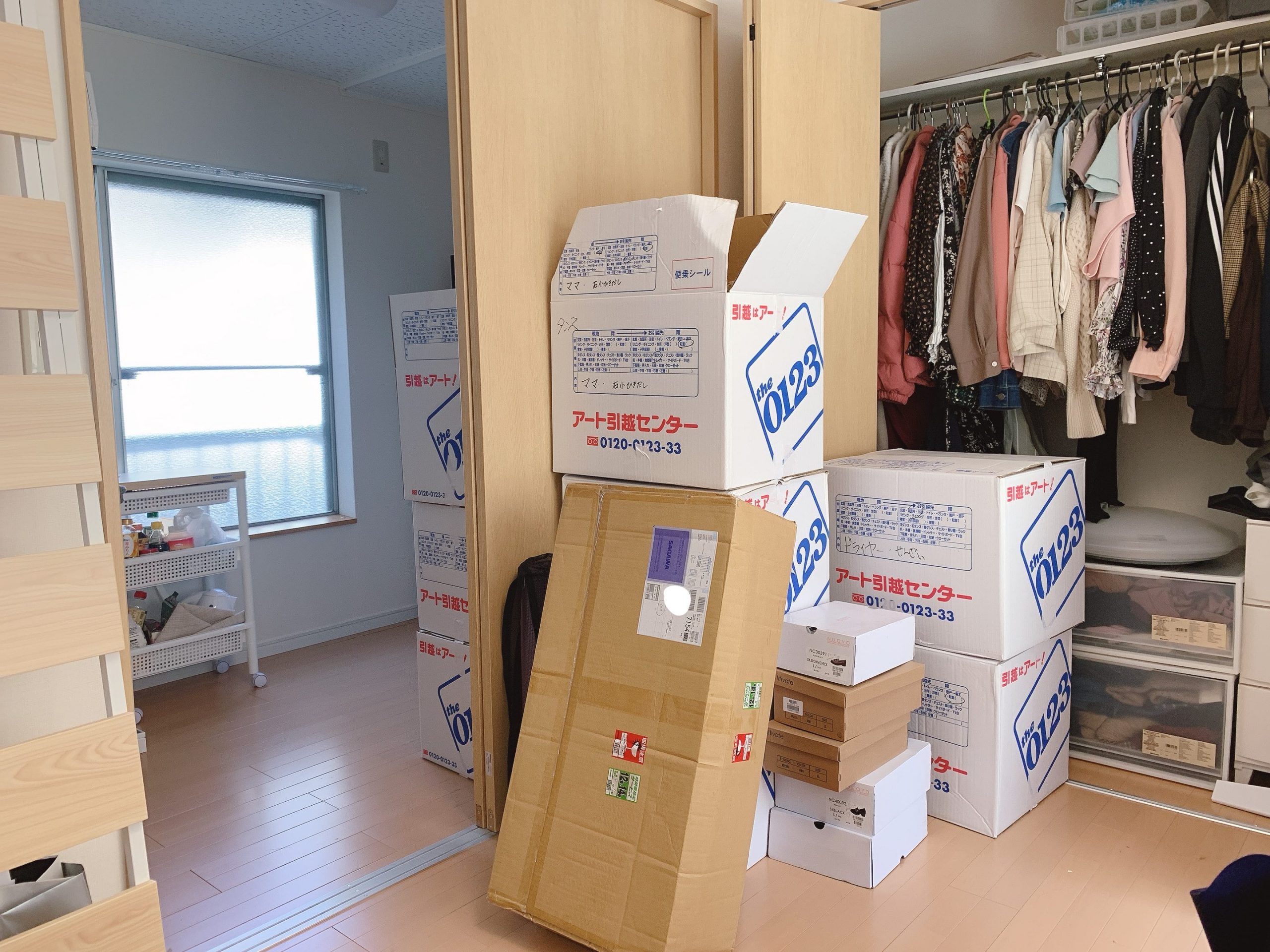 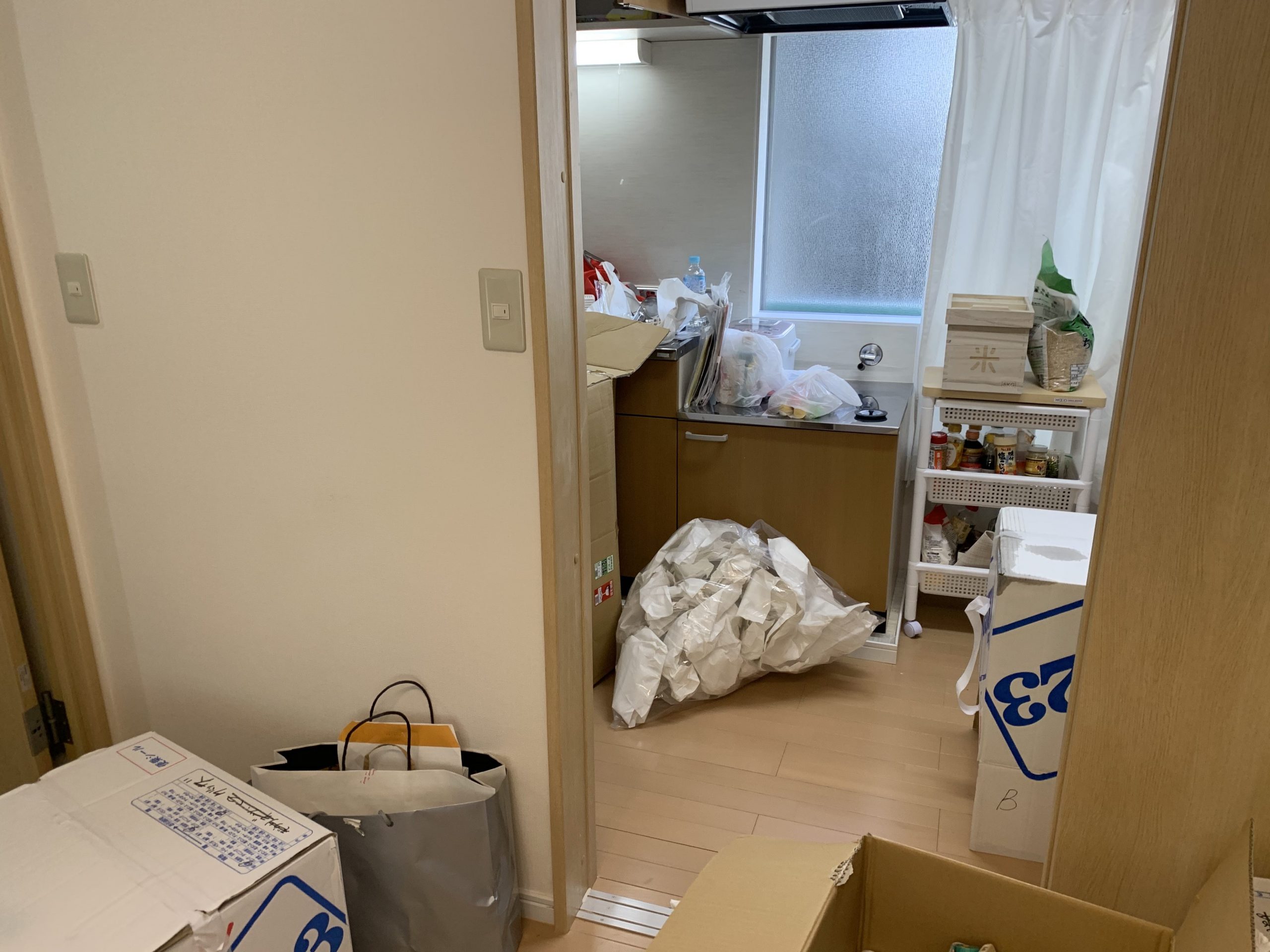 Here are photos of my new place right after the movers left. I chose a 1DK with enough space for a two burner stove.

In my opinion, unpacking takes a lot more time and space than packing does. Especially when you’re doing everything alone. Separating trash is also very tiring. I wish I asked a friend to help me out when I had the chance! 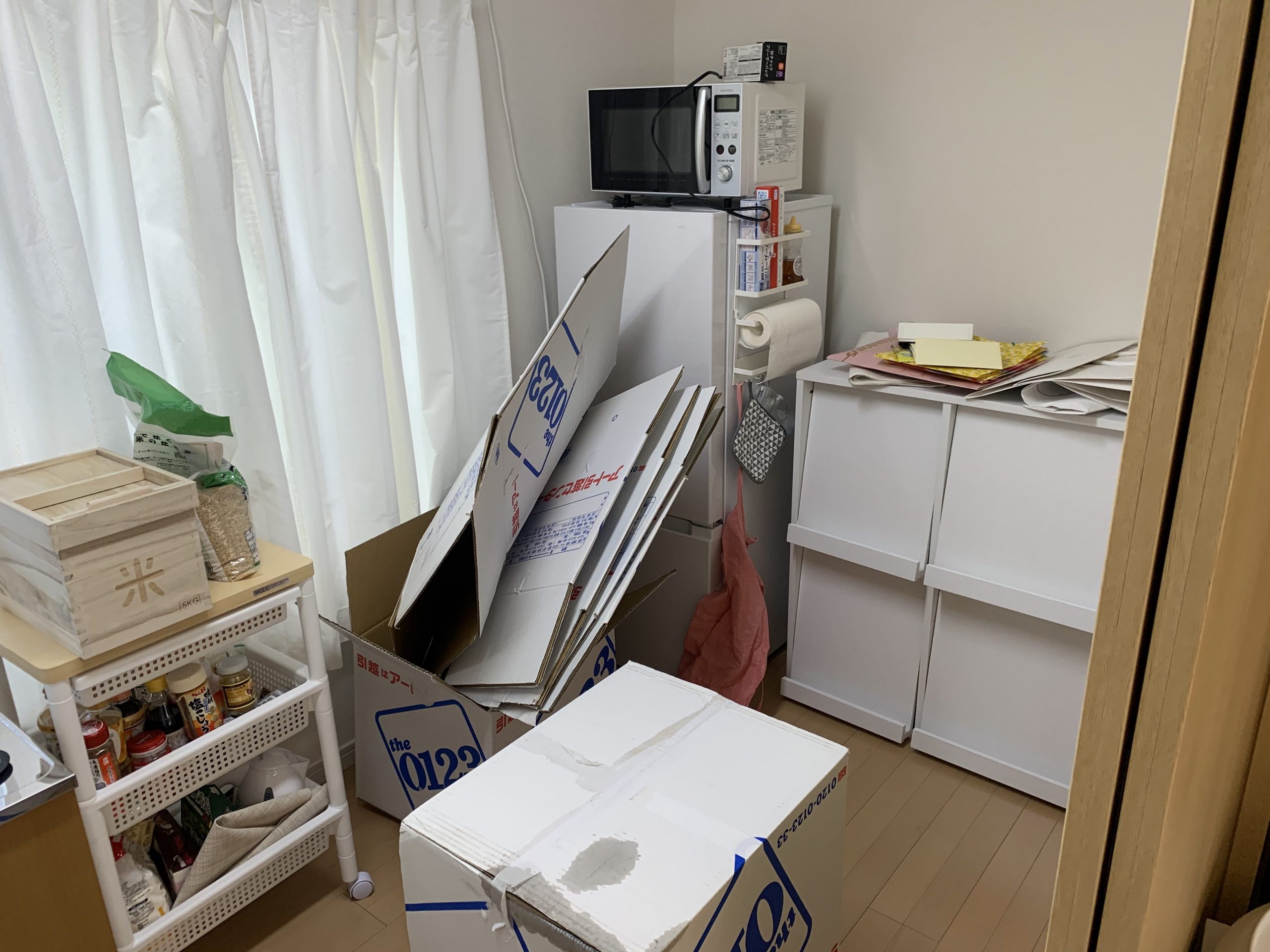 Cardboard boxes are so hard to tie up! Photo: Cindy 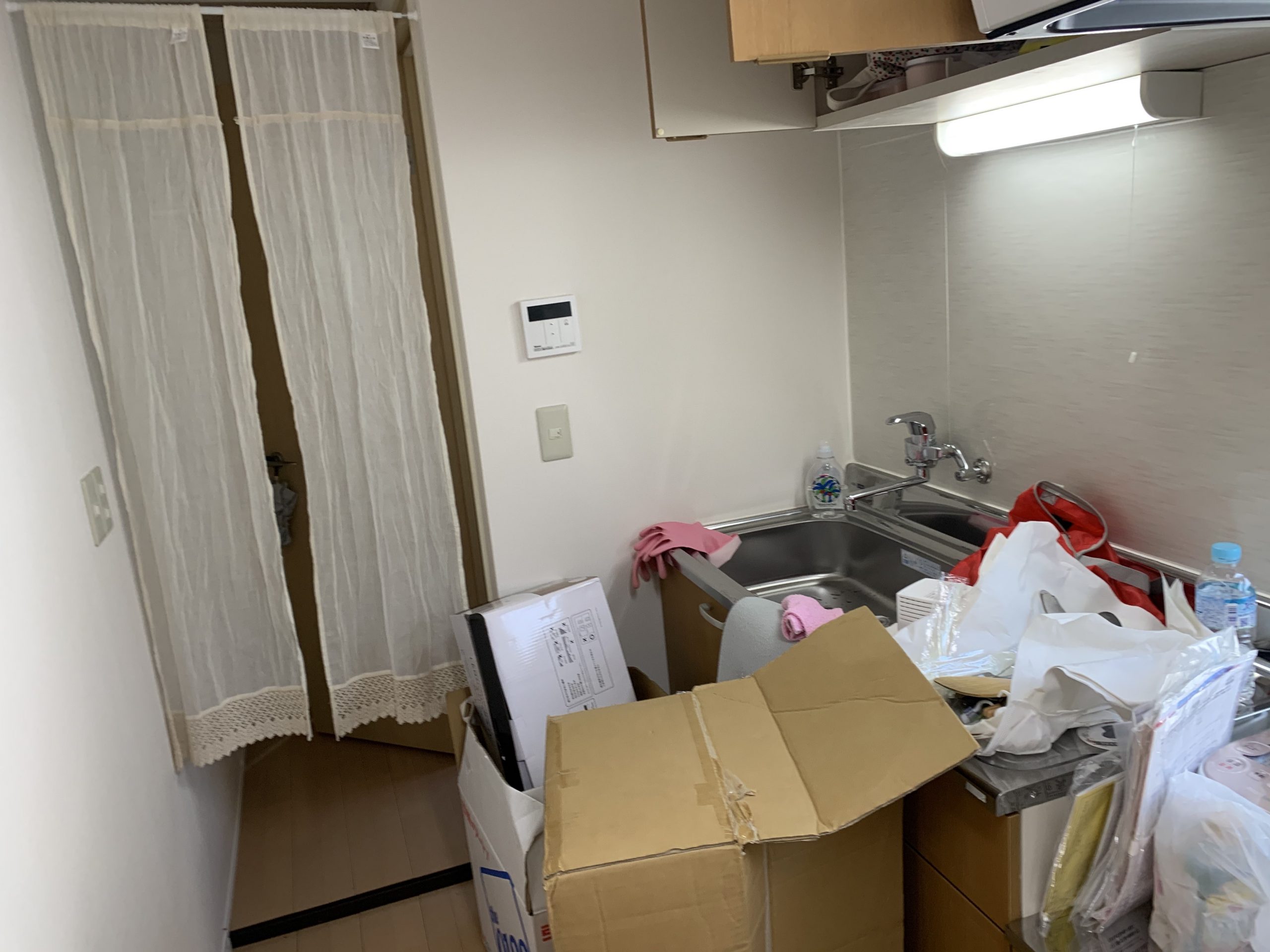 What a mess! Photo: Cindy 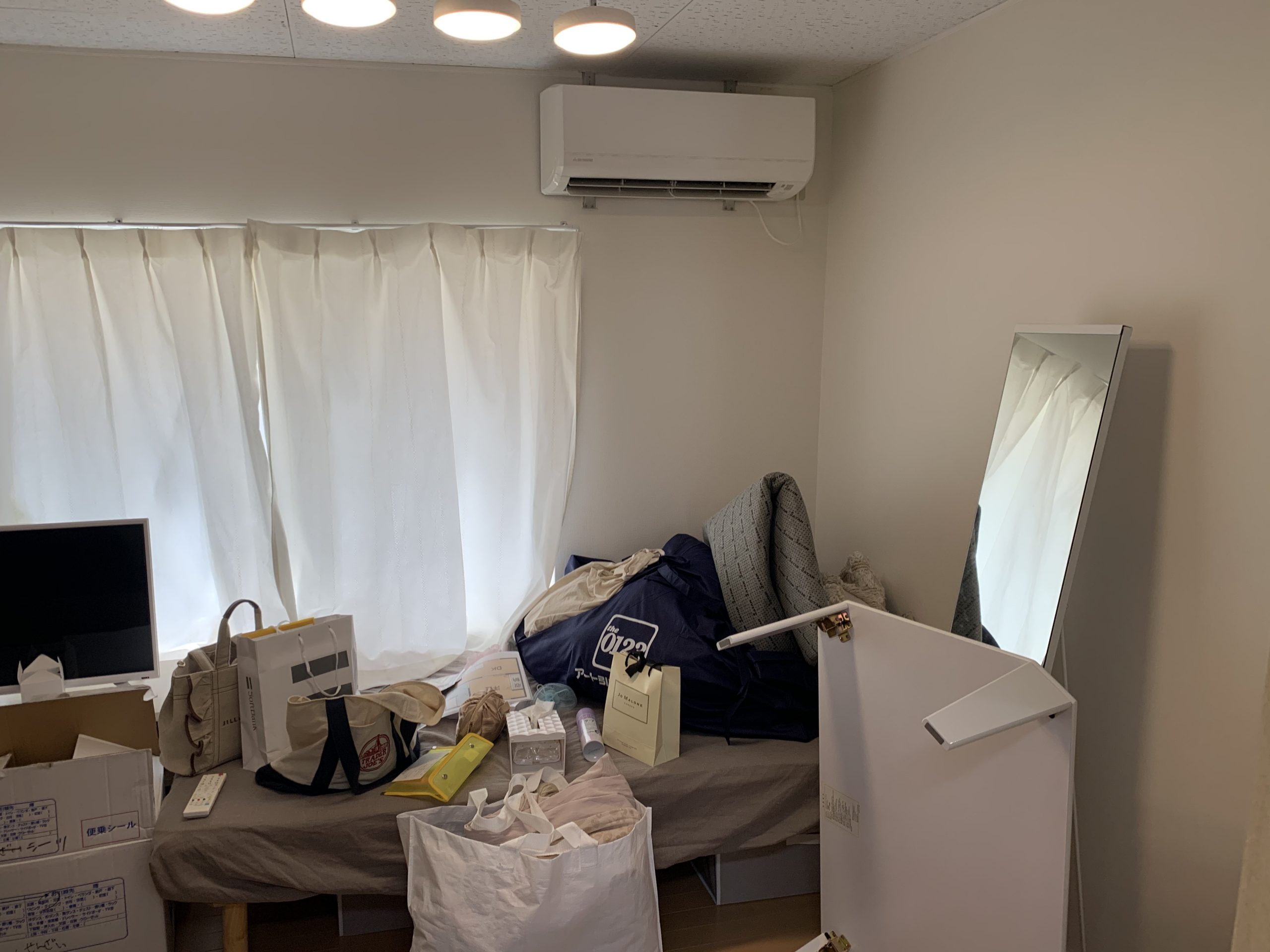 Cardboard boxes are especially hard to tie up. I think most people know that you have to tie them up together with a rope or string when throwing them away. It sounds pretty easy but is surprisingly draining, especially when you’re dealing with big boxes like I was.

(I make it sound like I used huge boxes, but in reality the largest I used was only a Medium…) 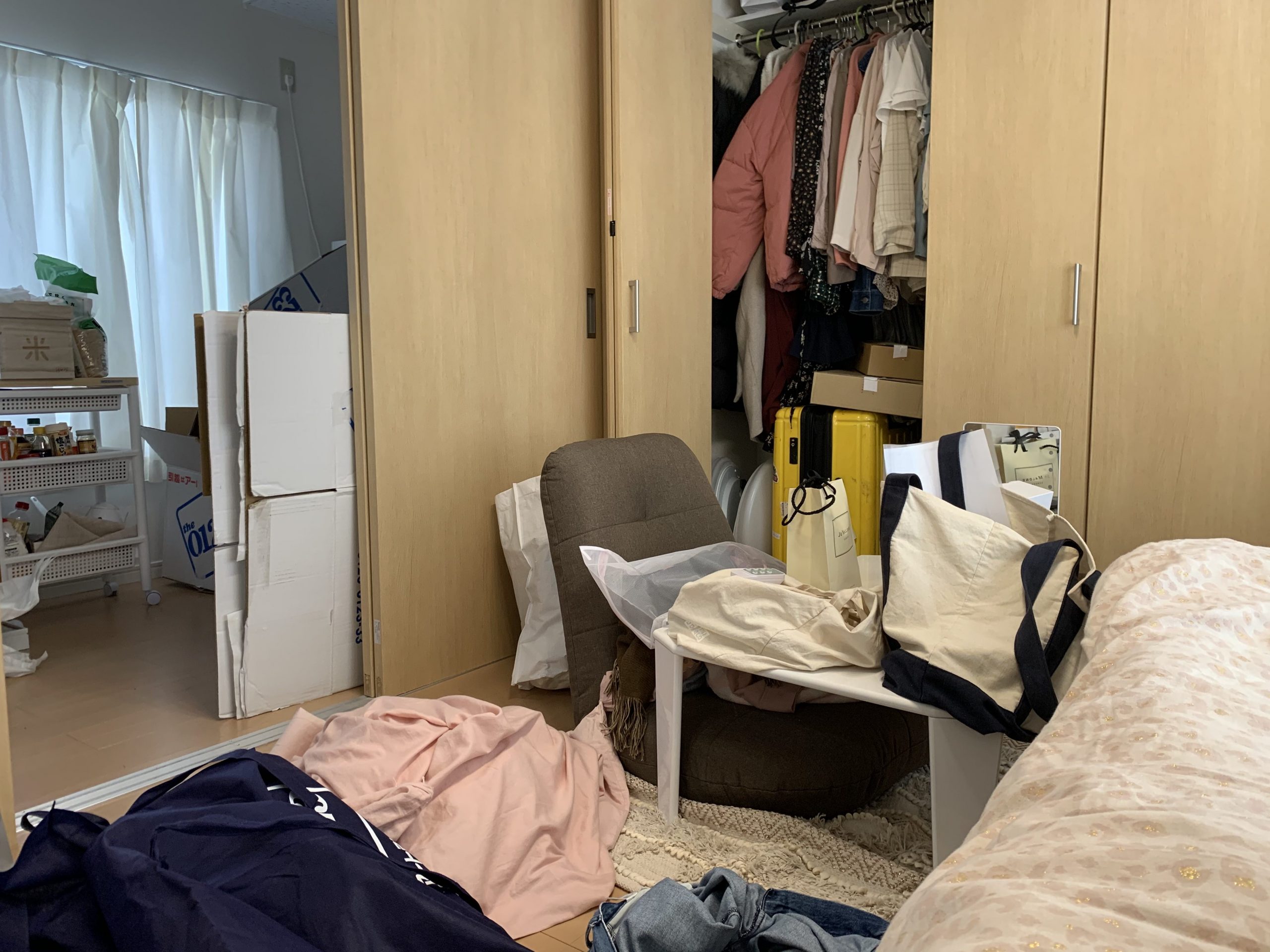 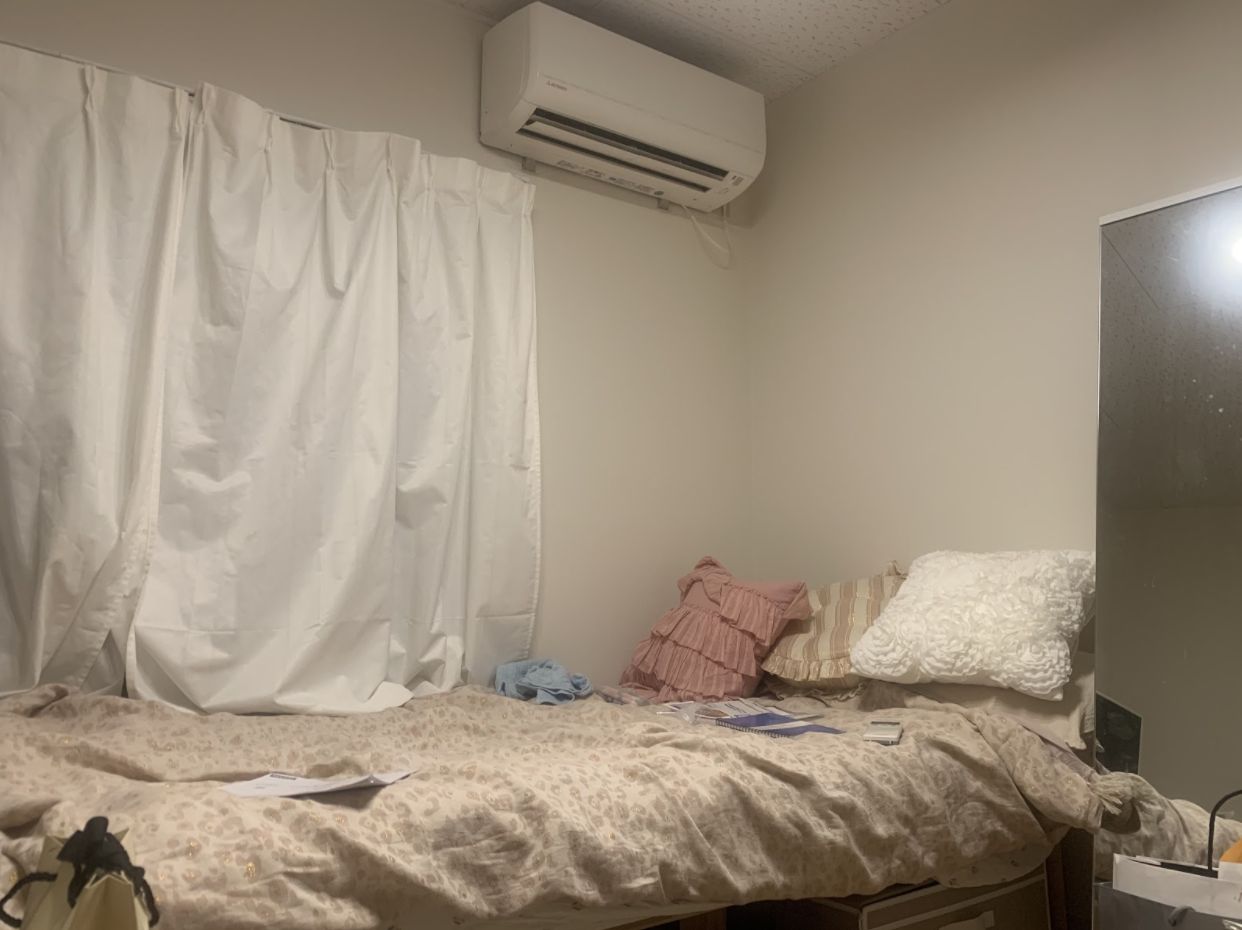 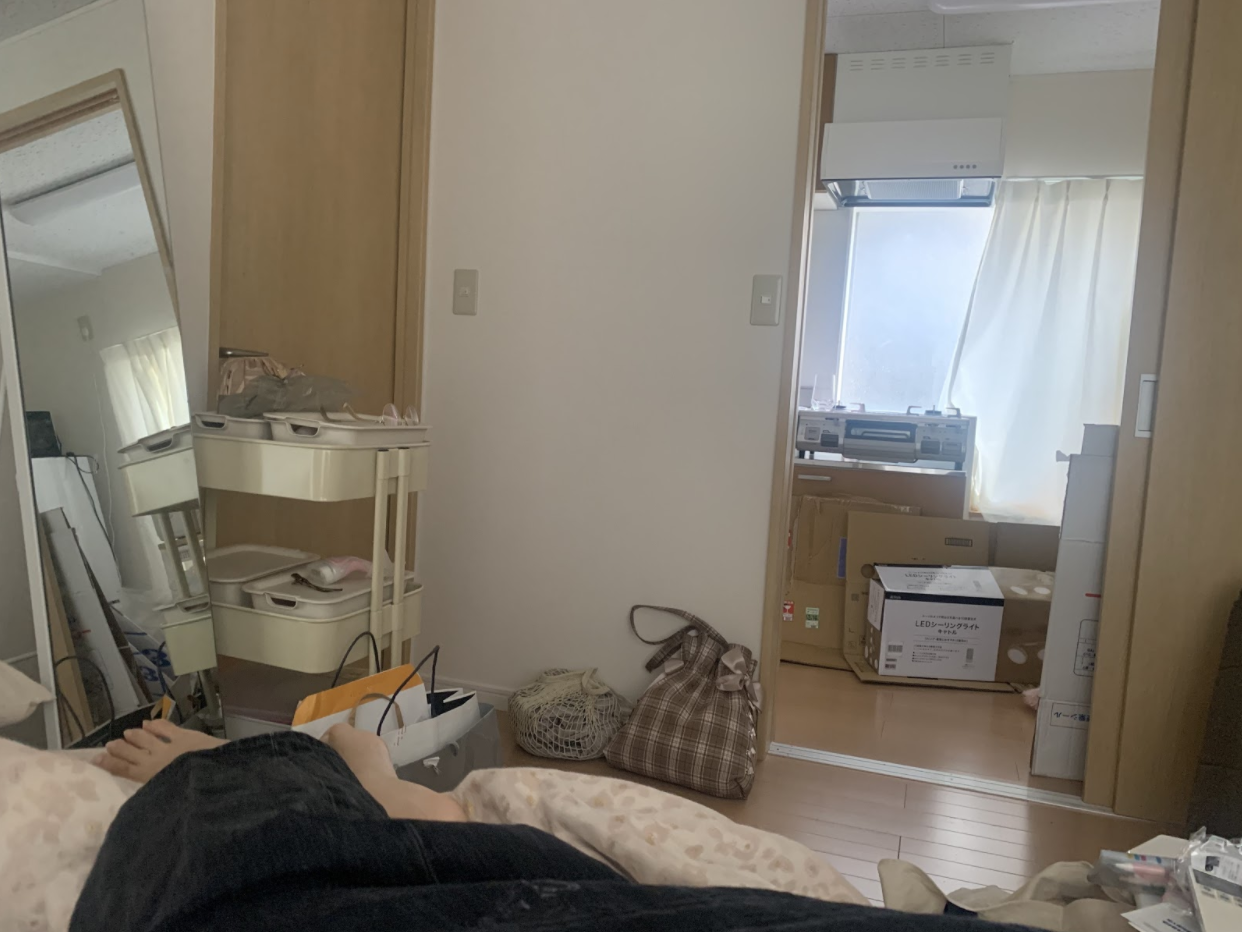 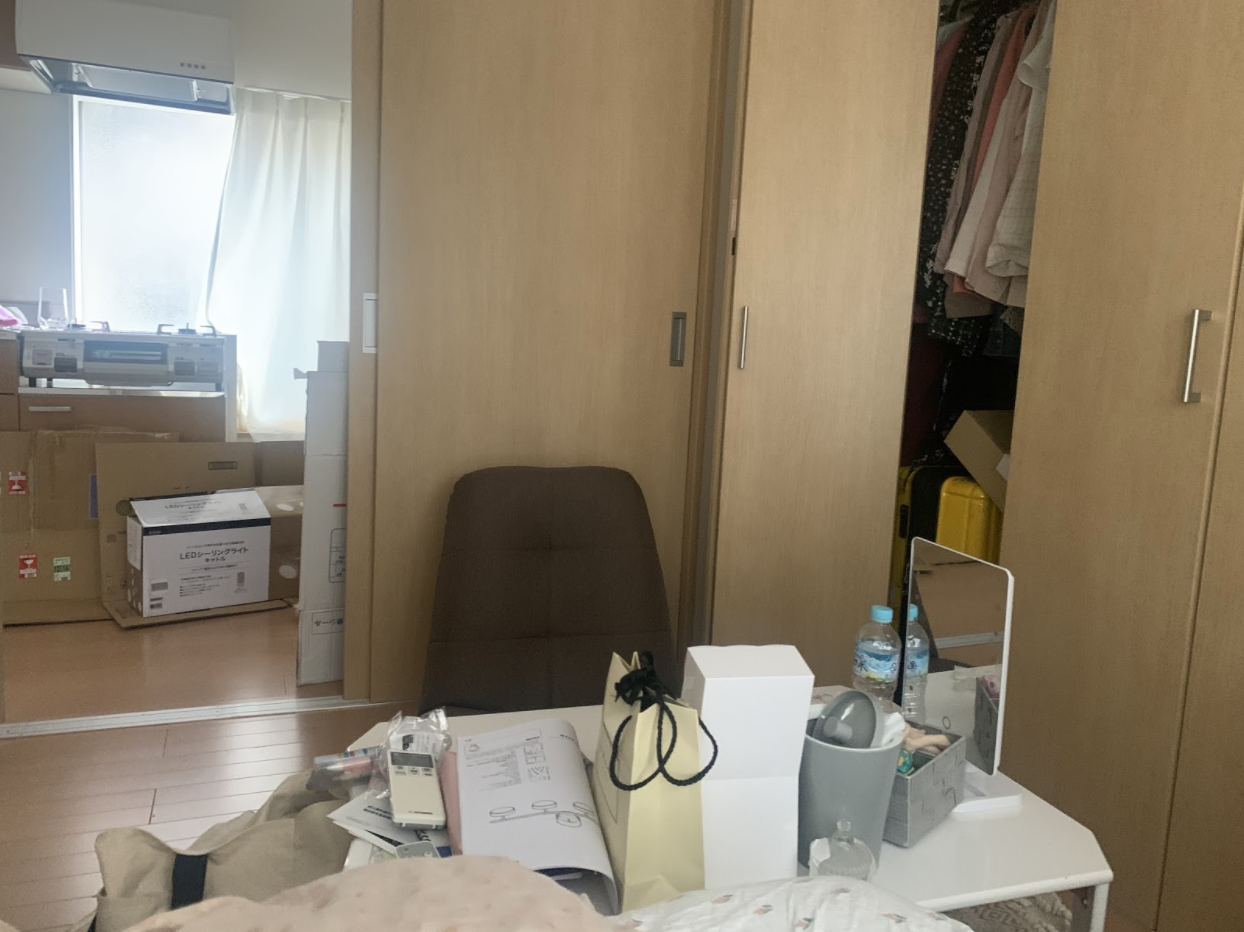 Still messy, but we’re getting there. Photo: Cindy

Here are photos from the day after. I managed to tidy up most of the mess. All that I had to do was throw out most of the cardboard boxes!

Luckily the moving company I used actually has a recycling service where they retrieve the boxes they used from your front door. I was really thankful for that as there was no way I could carry all of those boxes out to the dumpster by myself!

As of writing this, it’s been a week since I moved and so far adjusting has gone well! I was planning on writing more about the process, but couldn’t really take a lot of photos as it was happening.

I do plan on writing about the process of changing your address for official documents for next week’s article, though! So please look forward to that instead! If you’d like to know more about the technical process, here is a previous article we published that you can look into: Moving in and moving out of Japan: Procedures for registering at your city or ward office

Cindy works for the GaijinPot Housing Service, helping foreigners find their home in Japan. She relocated to Japan after graduating from De La Salle University in the Philippines. Read Cindy’s self-intro to find out what brought her here!