Moving in Tokyo as an International Couple

At the Housing Service we receive a lot of inquiries from couples looking to relocate. Following up on from my article last week on why my friend moved to Tachikawa, I thought it might be worth interviewing a friend who recently moved in with her Japanese boyfriend.

This time, I spoke with Heidi. She’s a Filipino like me, and teaches English at a language school in Tokyo. She used to live in a small 1K with her boyfriend, Shogo, of two years. They were living in the neighborhood of Ichigaya and recently moved to Yoyogi. I was able to hear the process directly from her as it was unfolding, but I thought sharing the story with our readers would give good insight into how it actually is moving as an international couple in Tokyo.

Heidi used to live alone, but moved in with her boyfriend after they asked the landlord and got his permission for her to stay in the unit. Because it was a 1K, it was a pretty tight squeeze. 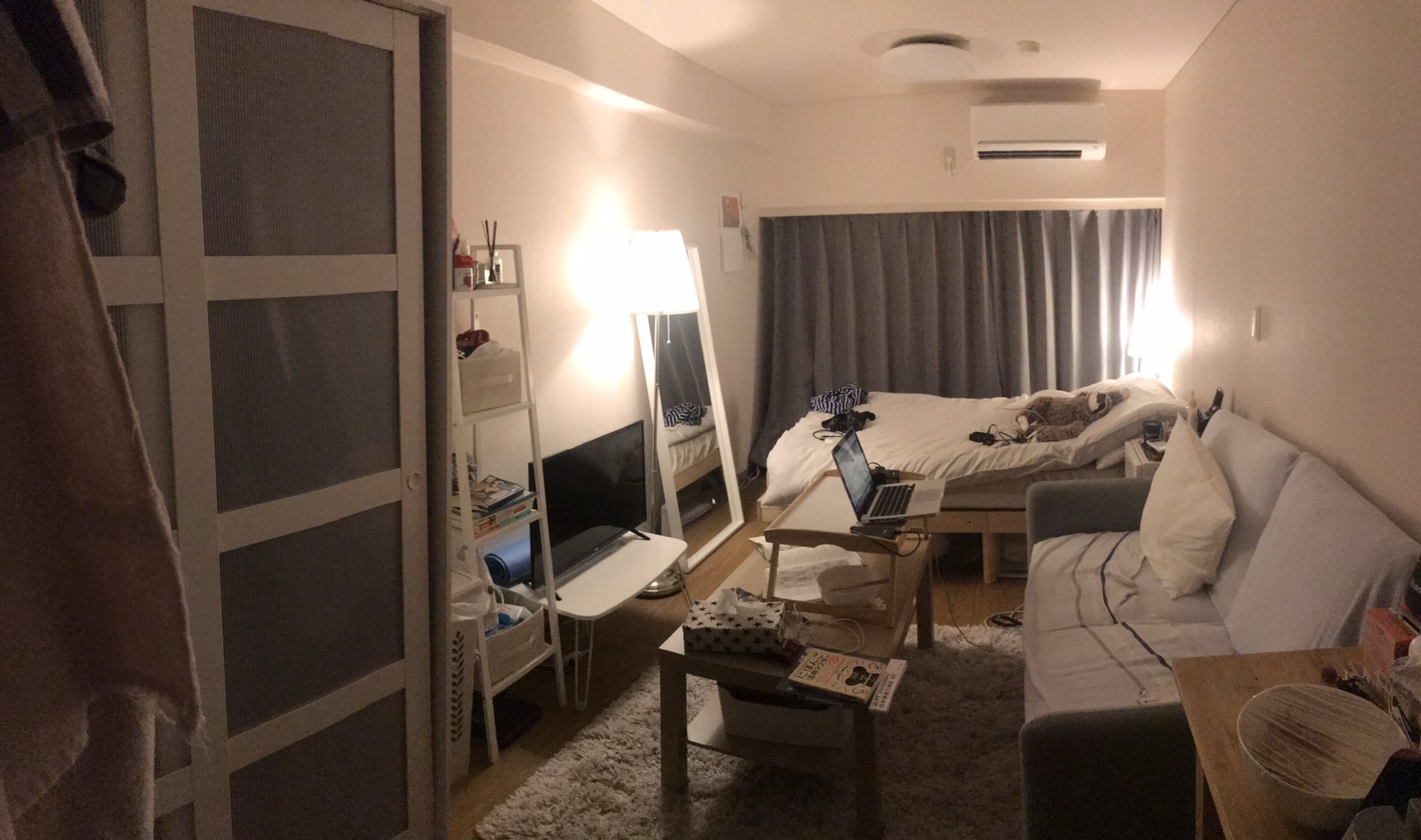 Before: Quite a tight squeeze for two people. Photo: Heidi

As for pros, the building did have an elevator and a nice view in the spring when the cherry blossoms bloomed. But more than anything, Heidi was thankful for the accessibility.

Ichigaya is very well-connected. A total of four train lines pass through it (namely the Namboku and Yurakucho Tokyo Metro, JR Chuo, and Toei Shinjuku lines), which make accessing any part of the city pretty easy. Heidi told me it would only take her ten minutes to get to the language school she used to work at everyday.

Naturally, living in such a small space would bring upon thoughts of relocating. At first, Heidi didn’t know if she could stay in Japan, so that was why they never considered it. They decided to just stay and split rent for the 1K for the time being. But after certain life changes, they started thinking about moving to another apartment.

While Heidi received a job offer and secured a work visa, Shogo also changed jobs and welcomed a larger salary. Their relationship also turned serious, with Shogo’s parents suggesting that they ‘move to a better place.’ “My grandma also didn’t feel comfortable that the 1K in Ichigaya didn’t have auto lock,” Heidi adds. “She thought that I should move somewhere that had better security.”

It was also Heidi who brought it up. Shogo, while reluctant at first, eventually agreed as long as they could find ‘something within their super strict guidelines.’ When I asked about the things they prioritized, Heidi gladly gave me a list of what they wanted: ‘A larger layout, building age, direction of the sun, separate toilet and bath, autolock, and a 5 minute walking distance from the station.’

Heidi told me that she went online everyday looking at the areas they were interested in, while keeping in mind the budget they set. It was ¥140,000–with Shogo providing ¥80,000 (and payment for the utilities) and Heidi, ¥60,000.

“We were looking into Kichijoji and Yoyogi Uehara at first. We even spent a few hours in Kichijoji just to get a feel for the area. Shogo liked it but felt that it was too crowded for his liking. Yoyogi Uehara, on the other hand, was also really nice, but I felt that it was difficult to commute from because it only had one train line going through it. Yeah, the express train did stop by, but it was still hard to transfer from,” Heidi explained.

Another area they were looking into was Nakano. They even went to see a nice property that was ten minutes from the station, but ultimately didn’t go for it because Shogo didn’t feel that the streets were brightly lit enough on the way home.

“That’s a lot!” I laughed, not helping myself. To which Heidi replied: “I know I’m a brat, but if I’m gonna move, it better be the best apartment of my life!” Touché.

But considering that their current apartment was a 1K, it was still very constricting. “There was no space for anything because it wasn’t meant for two people in the first place,” Heidi mentioned. Besides that, the apartment had a tiny unit bath and only one gas burner, which made cooking time-consuming and difficult.

“Everything happened so fast. It happened in one weekend.”

Heidi was on her phone as usual when she found a new, bright 1LDK in Shibuya. The moment she saw it, she knew she had to get Shogo to inquire. He was skeptical at first, but changed his mind as soon as they saw it together.

“One thing we made sure to tell the realtor was that we were an international couple,” Heidi said. “Sometimes we even had to say we were engaged, and have been together for two years just so the landlord would consider us.” Though arguably getting better every year, some landlords are still hesitant to rent out to foreigners.

In the end, they did end up moving into the 1LDK they saw at Shibuya. When I asked Heidi for a quick description, she told me the following:

The only two cons: The windows face a building (but still gets sunlight!), and they have to use the stairs to get to their unit.

For moving, Heidi decided to look for the most affordable option available. Her former boss had suggested that she check the Facebook group, Sayonara Sale. There, she found David Green, a guy advertising his moving services, and messaged him. From there it was smooth sailing.

“He was super accommodating, and the quote he gave me was beyond reasonable. It was only ¥18,000 for everything. He took all of my stuff and Tetris’d them inside his small mini-truck. He even reinstalled everything once we got to my new place. All in two hours by himself!” 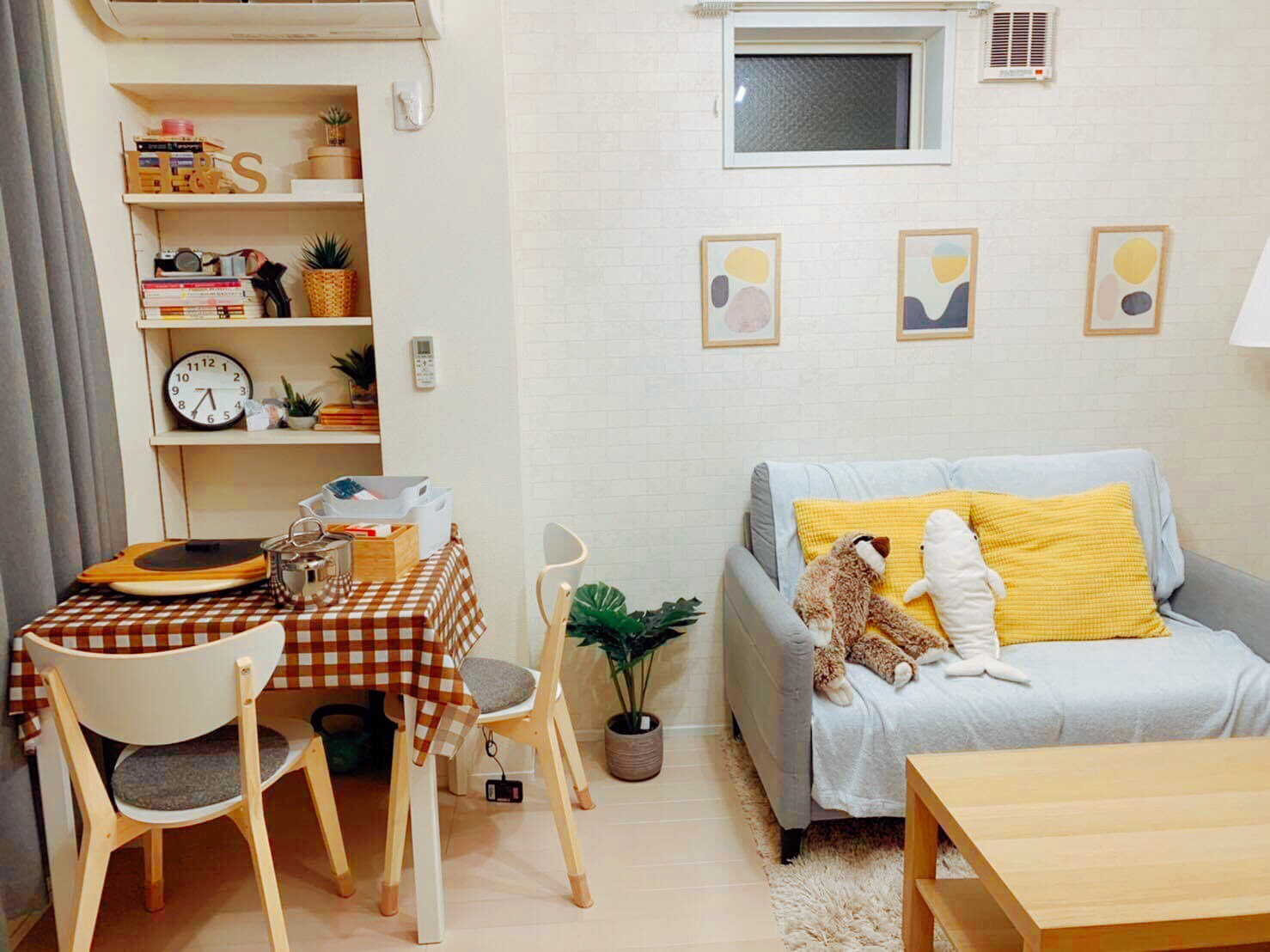 After: A bright, spacious 1LDK in Shibuya! Photo: Heidi

Now, it’s been a few weeks since moving and Heidi has mentioned that Shogo still feels like he’s dreaming. “I like the new apartment so much that it’s like I’ve forgotten all about my old life in Ichigaya!” She laughs. The new unit feels much safer now because of the auto lock, and interior decorating has been more enjoyable because of all the new space. “I’m trying not to fill it up with too much stuff because I can still remember the Tetris truck!”

For Any Couples Seeking to Move

“The minute you find a property you like, you have to message them to ask if they will take you right away,” Heidi says. It’s much easier if your partner is Japanese. Heidi thinks she wouldn’t have gotten the apartment had she been alone.

Another thing she would like couples (or people looking to move in general!) to know is the importance of location. “No matter how nice your apartment is, if it’s in an inconvenient place, you’re gonna hate living there.” Heidi adds that she thinks Yoyogi Uehara would have been a good option if she worked on the Odakyu Line. “But I don’t, so there’s no point.”

As for budget, it’s best not to just set a target price, but to consider utilities as well. No matter how cheap a place is, utilities will always add up at the end of the month. So that’s important to consider too.

While Heidi went with an outside agent, our properties at the GaijinPot Housing Service are pre-approved and have services available all in English from move-in to move-out!

Most property management companies don’t usually allow two people in a 1K, so Heidi’s was a special case. For two people, a 1LDK measuring 3- square meters or larger is the norm.

Below are links to units we have available for two people in areas we cover in Japan. If you can take a look and let us know you’re interested, we’ll be glad to get back to you as soon as we can!

Cindy works for the GaijinPot Housing Service, helping foreigners find their home in Japan. She relocated to Japan after graduating from De La Salle University in the Philippines. Read Cindy’s self-intro to find out what brought her here!

Lead photo: The apartment that Heidi and Shogo moved into! Photo: Heidi