How affordable is it to buy a home in Japan compared to other countries?

Buying a home is one of the biggest financial and personal decisions most people will make in their lives. And “affordability” is only one of the factors you should look at. In a previous article, we discussed the issue of deciding whether you can afford to buy a home in Japan and whether you should rent or buy.

Today we look at home affordability in Japan versus other countries.

Affordability Based on Income Multiple for Japan

The income multiple is the ratio of the average price of a home to the average annual income. The lower the multiple, the more affordable it is for the average income-earner to buy a home.

A Median Multiple Above 4.1 Means Housing is “Seriously Unaffordable”

The Median Multiple has been recommended by the World Bank and the United Nations to compare affordability in urban housing markets across countries.

It is calculated by dividing the median house price in a given market by gross annual median household income.

Note that this methodology differs from Tokyo Kantei’s, which uses average prices and incomes, but it is still instructive to compare the two multiples to get a general idea of just how affordable or unaffordable houses are in Japan.

According to the Demographia International Housing Affordability Survey,

— A Median Multiple of 5.1 and over indicates a market that is “severely unaffordable”

— A Median Multiple of 4.1 to 5.0 indicates a market that is “seriously unaffordable”

— A Median Multiple of 3.1 to 4.0 indicates a market that is “moderately unaffordable”

— A Median Multiple of 3.0 and under indicate a market that is “affordable”

Based on these indices, on a nationwide basis, it is “seriously unaffordable (8.19) for the average income earner to buy a home in Japan.

Home affordability in other countries based on Median Multiple

How does home affordability in Japan compare to other countries?

The authors looked at the Median Multiple for 92 major markets across these eight countries. The findings are summarized in this table:

The study concluded that:

However, the Tokyo Kantei report does calculate the multiple by prefecture.

Income Multiple in Japan by prefecture

In 2019, the five least affordable prefectures to buy a newly constructed apartment were (income multiple in parentheses).

Please see the charts below for the breakdown by prefecture: 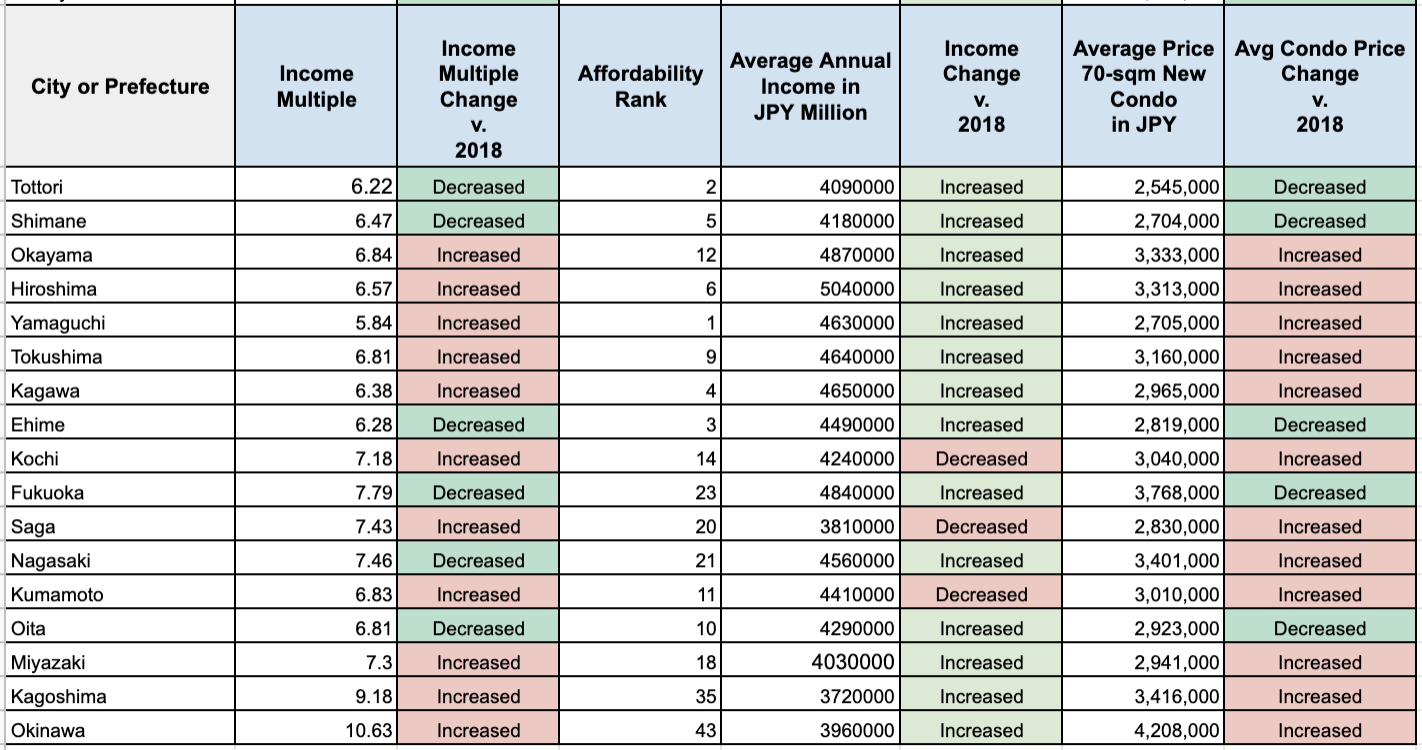