The danger of landslides and flooding in Japan cannot be underestimated, especially during the rainy season. It is also no less a risk factor than earthquakes when assessing the merits and demerits of living in a certain neighborhood or buying or renting a particular property.

Just earlier this month, following torrential rainfall, a landslide was triggered which swept through the Izusan neighborhood of Atami, Shizuoka prefecture, on July 3rd. Nineteen people died during the landslide and nine went missing. Atami is situated on the edge of the prefecture’s mountain ranges, and is known for its steep valleys and hills. Preceding the landslide, the city received 310 millimeters (12.4 inches) of rainfall in a 48-hour period.  The landslide destroyed a number of houses and left roads covered with debris. (Source: Wikipedia)

Investigations into the cause of the landslide are ongoing, but authorities are investigating suggestions by experts that improperly accumulated soil brought in for development purposes may have been partially responsible for the landslide. (Source: Wikipedia)

In the last few years, devastating landslide and flooding disasters have struck Japan on an annual basis, including:

How much of a danger are landslides and flooding risk in Japan?

According to the MLIT, about 1.23 million, or 23.1% of households in Japan live in areas where there is a risk of a landslide or flood-related disaster occurring.

Of these, about 3% of households live in areas designated as “sediment-related caution areas,” about 4.6% live in “tsunami inundation areas,” and about 19.1% live in “flooding (inundation) areas”.

On August 20, 2014, following torrential rain in which a month’s worth of rainwater fell in a single day, several landslides were triggered near a mountain near the city of Hiroshima, with Asakita ward being the most severely affected. Seventy-four people were reported dead (Wikipedia: 2014 Hiroshima Landslides).

A 2015 study found that long-term land-use changes, notably the expansion of residential areas onto mountainous areas where past debris flow (resulting from a previous devastating flood in 1999) made this area especially vulnerable to sediment-related disasters. The affected neighborhood is very close to downtown Hiroshima, which further multiplied the impact on local residents.

In response to the Hiroshima landslide disaster, the Ministry of Land, Infrastructure, Transport and Tourism (MLIT) conducted a five-year survey of the country’s “landslide disaster warning areas” (土砂災害警戒区域) which was published in March 2020. This survey is published on the homepages of each of Japan’s prefectures and is the basis on which certain areas are designated as:

For areas that are designated as Landslide Disaster Warning Areas, local governments are tasked with improving the local warning and evacuation system and to inform the public of landslide risks through landslide hazard maps.

In addition, real estate agents are also obligated to explain landslide and other natural disaster risks to people when they buy and sell land or buildings. This is one of the points covered in the Explanation of Important Matters, the official disclosure document provided to buyers prior to closing a transaction.

What can you do to protect yourself and your home against the potential dangers of flooding and landslides?

The first step is to inform yourself of whether and how much your home and neighborhood are at risk of these natural disasters.

Unfortunately, are often not published in English

Flooding and landslide hazard maps are published by local governments to provide residents with the following information:

The link to Japan’s national hazard map website is here. This site aggregates links to hazard maps published by local governments. You can also go to the official website of your city or ward and search for “ハザードマップ” (hazard map).

Unfortunately, most local governments do not publish hazard maps in English.

Here is an example of an English hazard map, published by Toki City, in Gifu prefecture. 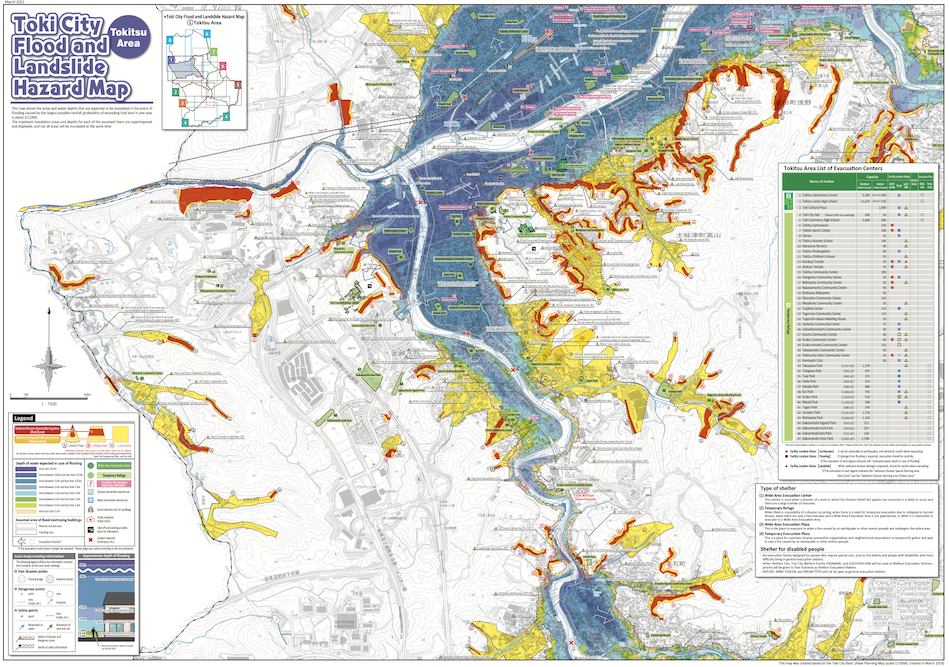 In general, in hazard maps, dark blue denotes areas most likely to flood. However, the color legend of the is not uniform across maps published by different municipalities. If you can’t read Japanese, you may want to ask a friend to help you decipher the map for your municipality. 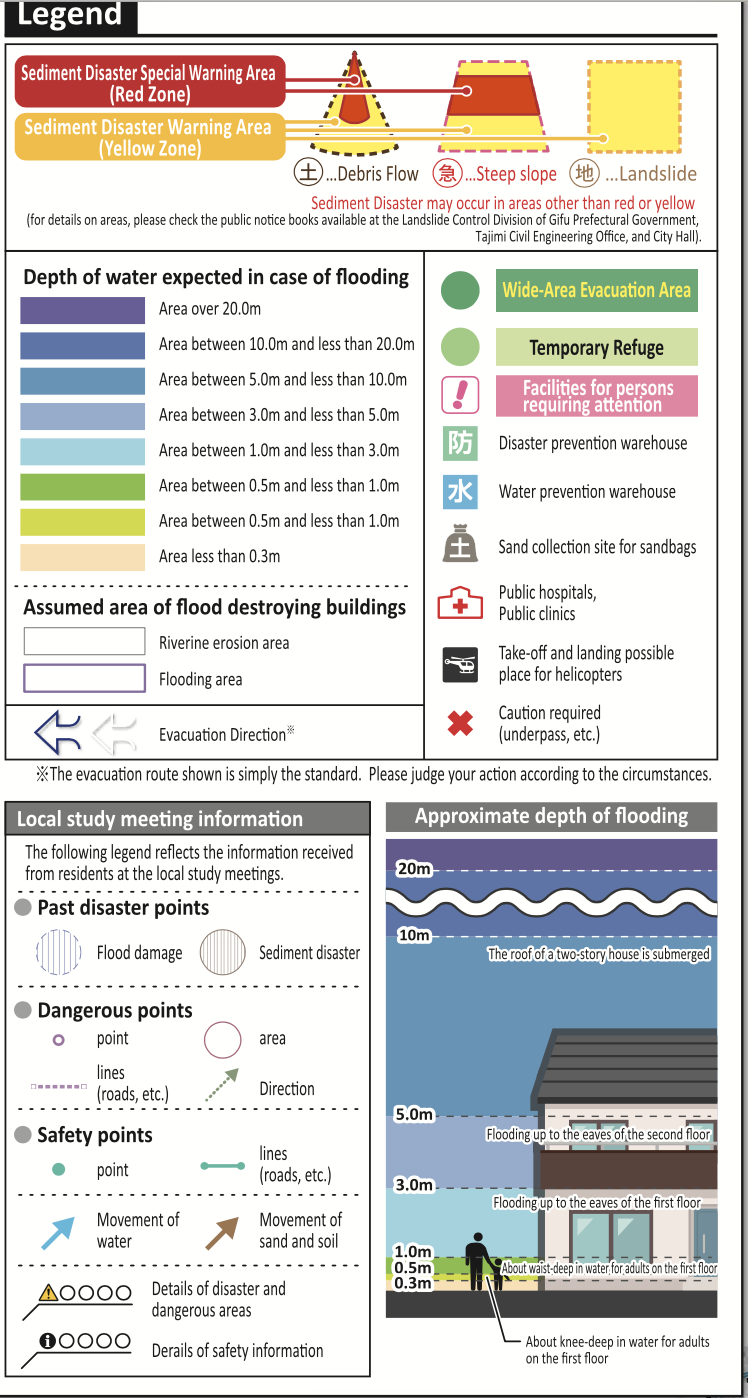 The legend explains the color codes for the different depths of water expected during flooding. In general, blue designates the ares with the highest level of expected flooding. Image: Toki City

Edogawa ward is especially prone to flooding because 70% of the land in the ward lies below sea level. When there are high levels of rainfall in Saitama, Gunma, and Tochigi prefectures, much of the water flows into the Arakawa and Edogawa rivers, which run through the center the ward and empty into Tokyo Bay.

The information published by Edogawa ward paints a dire picture of could potentially happen in the event of a major flood in the area. In the worst case scenario, flooding could continue for two weeks in case the Arakawa and Edogawa Rivers overflow or if there is high-tide flooding.

Here is a short summary of how to prepare for a major flooding disaster, based on the guidelines published by Edogawa Ward:

Know where to get information ahead of time

Color codes on the official JMA website tell you what action you should take:

NHK and other media will also broadcast these advisories and warnings as they are updated. Officials strongly urge people to evacuate early if such an evacuation advisory has been issued for your area. Flooding and landslides can occur with very little warning. If an advisory is issued for your area, please take immediate action. 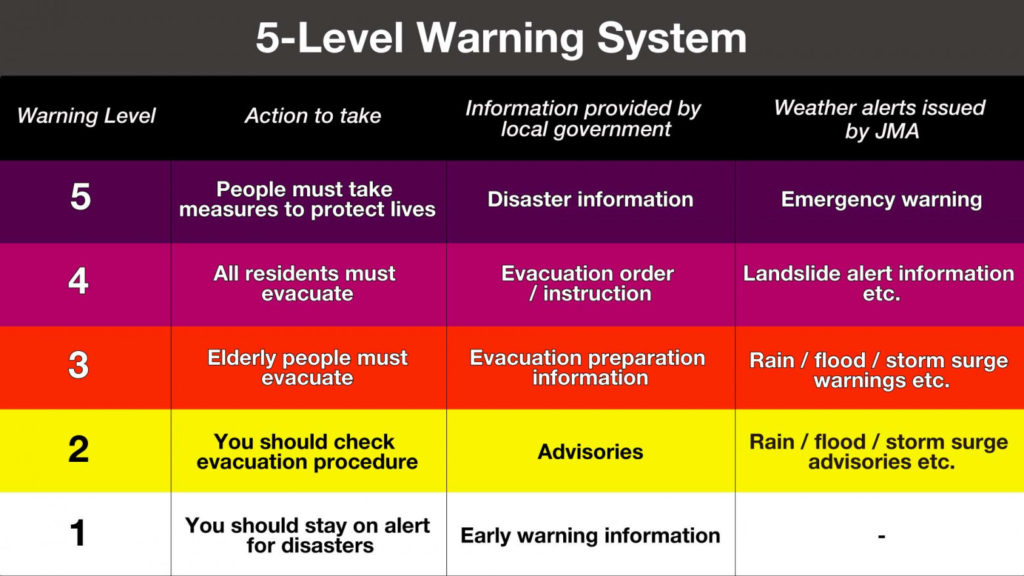 Long-term preparation for possible evacuation due to heavy flooding

If you live in a single-family home there are steps you can take to mitigate flood damage. These include:

(1) Raising the foundation of the home higher than the expected water level.

(2) Putting sandbags or water stoppage plates around entrances and the garage.

(3) Strengthening the joint foundation so that the entire building does not rise due to flooding.

(4) Installing outdoor air conditioner units as high as possible off the ground.

Some of these measures require significant additional constructions costs, which of course, have to be weighed against the estimated flood risk for the location of your home.