How to Read a Japanese Address

The Japanese address system is based on geographic entities and areas, rather than on a building’s location on a specific street, which is the case in many western countries. In fact, except for Kyoto and Sapporo, an address in Japan will not even include the name of a street.

When written in Japanese characters, addresses are written out in a funnel going from largest geographic entity to the most specific. This rule is reversed when writing the address in the roman alphabet.

Written in romanized form it is:

Let’s break this down into the different parts!

The first part is the postal code. The symbol 〒 stands for “postal code”. Postal codes in Japan are in this format: NNN-NNNN (three digits hyphen four digits).

The next part of any address is the municipality. There are 47 different possibilities here because there are 47 so-called prefectures in the country, but more simply, there are only five main combinations:

In Japanese, Japan’s 43 prefectures (which are actually called -ken), the Tokyo metropolis, Osaka, Kyoto, and Hokkaido are collectively referred to as 都道府県 (To-Dou-Fu-Ken).

When you are looking at a fully written out address in Japanese, the first section after the postal code always starts with the name of one of the prefectures, Tokyo, Osaka, or Kyoto and ends with one of these kanji: 都, 道, 府, 県 (To-Dou-Fu-Ken).

Real Estate Japan is located in Tokyo. In our address: 〒106-0044東京都港区東麻布1-8-1 東麻布ISビル4F, the prefecture would be 東京都 (Tokyo-to).

This is the next division after prefecture. Generally speaking, there are three main possibilities here:

After municipality, some addresses are then broken into “towns” (machi or cho, 町) or “villages” (son, 村), but not all addresses contain this designation.

Real Estate Japan’s address does not contain this sub-division.

The next part of a typical Japanese address contains

These three designations are usually separated by hyphens.

This means we are located in the first district of Higashi Azabu, block 8, house (building) number 1. Hyphens are read “no“. Ichi means “one” and hachi means “eight”.

This part of the address could also be written 東麻布１丁目８番地１号, but the hyphens are understood to mean that the first part refers to the district name and number, the second to the block, and the third to the house or building number.

It’s also much easier to read and write hyphens than all the kanji, and it is not uncommon to omit, chōme, banchi, and gō when writing addresses or addressing mail.

This part of a Japanese address is often the most difficult to deal with when reading a map and trying to find the corresponding points to a written address. 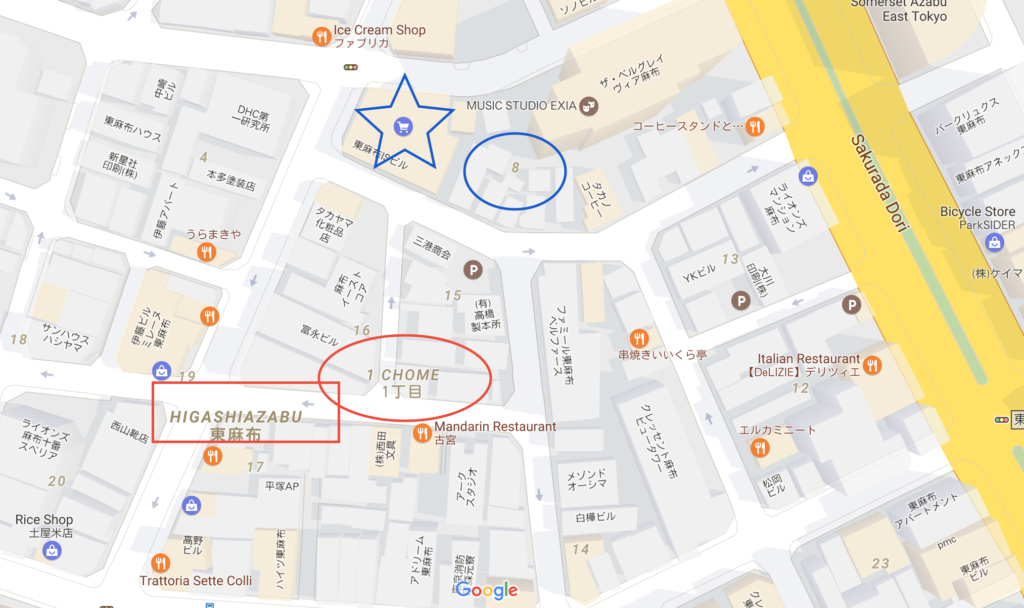 Start by finding the name of the district, then find the district number (chōme), then the block number (banchi).

Here are some general guidelines for finding these designations on a map:

If the address contains an apartment number, it may be added with a hyphen immediately after the building number.

In larger cities and towns, you’ll see metal town block indicator plates attached to buildings and utility poles. These tell you the block (banchi) you are in. Some even have the romanized reading of the address.

Please refer to Wikipedia’s very thorough explanation of the address systems used in these two cities.