What is the average annual salary bonus in Japan?

Bonuses are an important component of total compensation for most workers in Japan. When you move to Japan for a job, it’s important to understand how bonuses can affect your total annual salary so you can plan out your life here. In this article, we go over the basics of bonuses, including annual average bonuses nationwide, in the Tokyo metro area, and by occupation.

What is the average annual bonus in Japan?

The average and median were calculated based on a total of 129 occupations and 64,249 workers surveyed across Japan about their actual total compensation, consisting of their base salary or wage plus total annual bonus.

Occupations surveyed ranged from professionals like pilots, engineers, and doctors to skilled occupations (like electricians, carpenters, and plumbers) and un-skilled laborers (like custodians and people doing odd jobs). Because many occupations were not surveyed, it’s a good idea to take these numbers with a grain of salt.

Workers in some companies in Japan receive two bonuses a year (in the summer and winter), but bonuses are often tied to the company’s overall sales performance, so receiving a summer bonus is not a guarantee of a winter bonus. The survey below represents about 88% of all workers in Tokyo who received wage (or salaried) income in the summer of 2017.

It’s also important to note that salaries in Tokyo are higher than in the rest of Japan, which means that bonuses also tend to be higher.

The breakdown by industry for Tokyo Metro is as follows: 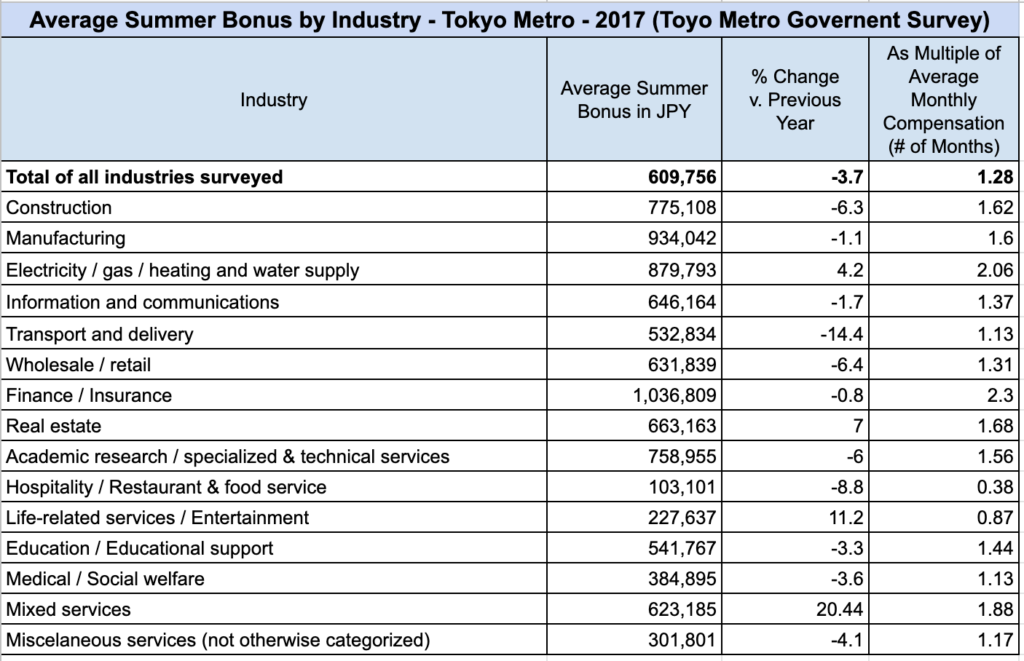 Importance of bonuses in total salary

Bonuses are an important component of salary for most workers in Japan. Bonuses are sometimes expressed as multiples of the monthly salary. For example, your contract may say that you will receive an annual bonus equal to two months’ compensation, depending on whether the company hits its target. For example, the table above shows that the average summer bonus for workers in metro Tokyo was equal to about 1.28 months’ salary.

Based on nationwide and Tokyo metro data, bonus compensation is equal to about 15% of total annual compensation but can be much higher (40% or more), depending on your industry and job type.

How are bonuses decided?

Not all companies in Japan pay bonuses as a guaranteed part of total compensation. How bonuses are calculated and determined depend on many factors, including:

Discretionary or performance bonuses, for example, are very common in sales roles and in the financial services industry. In general, whether your company or department hits its quarterly or annual sales targets and whether you hit your targets, as set by your manager, will determine whether you get a bonus and the size of the bonus. If you work in an industry where sales are not relevant (for example, public education), you may still receive semi-annual or annual bonuses, as written into your contract.

Bonus compensation is discussed when you are interviewing for a job (and usually as part of your annual performance review).

The following tables show average annual bonuses by occupation in Japan. These 40 occupations were selected from the total 129 occupations in the Ministry of Labor’s 2016 bonus survey. Analysis is by Real Estate Japan Inc.

Ranked by amount of annual bonus

Lead photo: Rush hour in Tokyo via Chris 73 on  Wikimedia