Where foreigners in Japan are moving in 2020 — Ranking by Prefecture

Tokyo’s resident foreigner population shrunk by 4.2% from January to August this year, but Japan’s immigration lockdown was not the only cause. To be sure, tens of thousands of people with residency visas have been stranded overseas as a result of coronavirus border controls.

But a closer look at the data gives us some insight into what’s going on with foreigners currently residing in Japan.

Top 5 prefectures / cities foreigners are moving out of:

Top 5 prefectures foreigners are moving to:

How many foreigners live in Japan?

Where do most foreigners live in Japan?

About 32% of all resident foreigners live in just three areas: Tokyo, Nagoya prefecture, and Osaka. Toyota’s global headquarters is located in Aichi prefecture and it is also home to many auto parts manufacturers who employ foreign workers.

About 16.9% of all foreigners in Japan live in the Tokyo 23 Wards. After the 2011 mega-earthquake, tsunami, and nuclear disasters, the foreign population of Tokyo fell temporarily but started to increase again in 2014 and has grown every year since then. Foreigners comprised 2.44% of Tokyo’s population in 2000 and 3.98% in 2019.

Tokyo’s foreigner population in 2020 by month

The resident foreigner population of Tokyo has fallen by about 4.2% in the first eight months of the year. Source: Tokyo Metropolitan Government (in Japanese), with the decline starting in March (when Japan implemented strict border controls to fight the coronavirus).

There are number of reasons for the steady month to month drop in population. The main cause, of course, is that immigration came to a virtual standstill starting in March.

A smaller cause of the steady decrease has been that foreigners are moving out of Tokyo to other parts of Japan. This movement is not unique to the resident foreigner population. We can also see the same pattern in the overall Japanese population.

In this article, however, we focus just on analyzing where resident foreigners are moving in Japan, specifically on what prefectures they are moving to and from.

The analysis below is based on data from Japan’s Ministry of Internal Affairs on migration of people between prefectures. It does not include people moving within a prefecture or city (for example, people moving from one ward to another in Tokyo). The numbers represent the net population gain or loss by month for January to September 2020.

Click on the links in the Prefecture column to see properties currently available to rent! 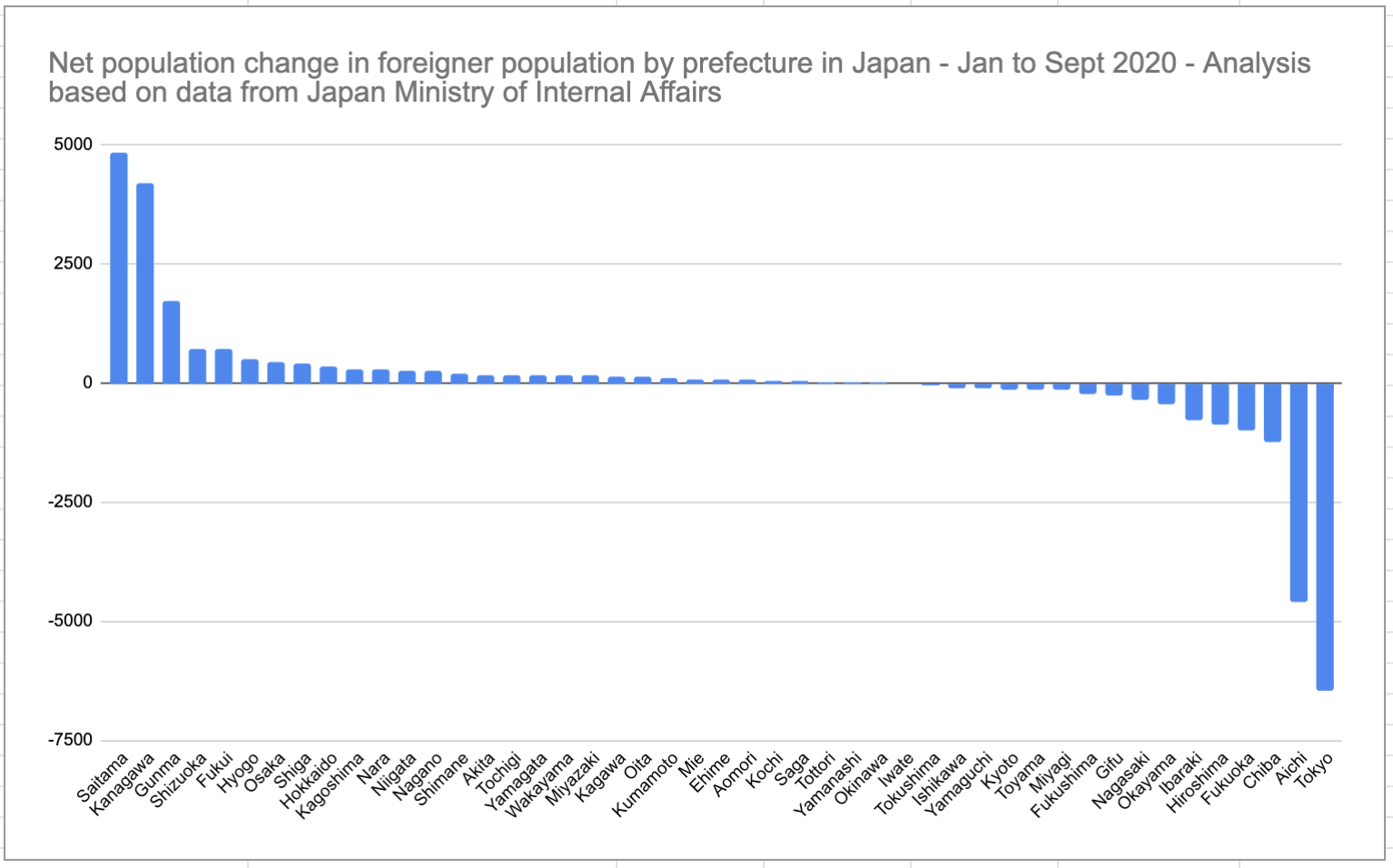 And here is the table, if we rank the prefectures by net population gain due to movement between prefectures:

Saitama, Kanagawa and Gunma, the top three prefectures in terms of net foreigner population gain by inbound migration from other prefectures never experienced a net loss in any month this year. Population movement peaked in March, notably in Kanagawa. 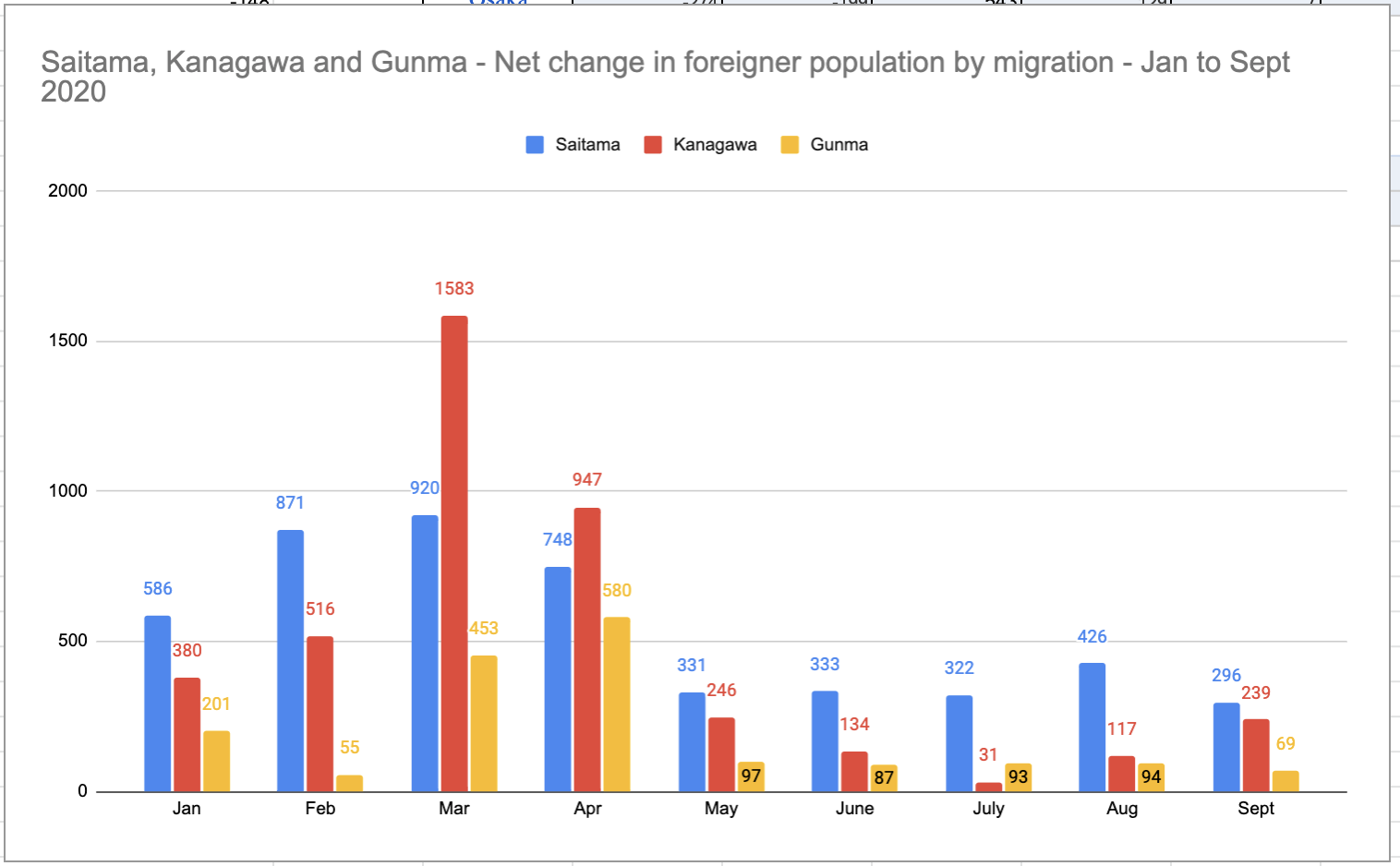 Chiba has had a net population loss due to outbound migration over the first nine months of the year, but started net population growth by month starting in May. 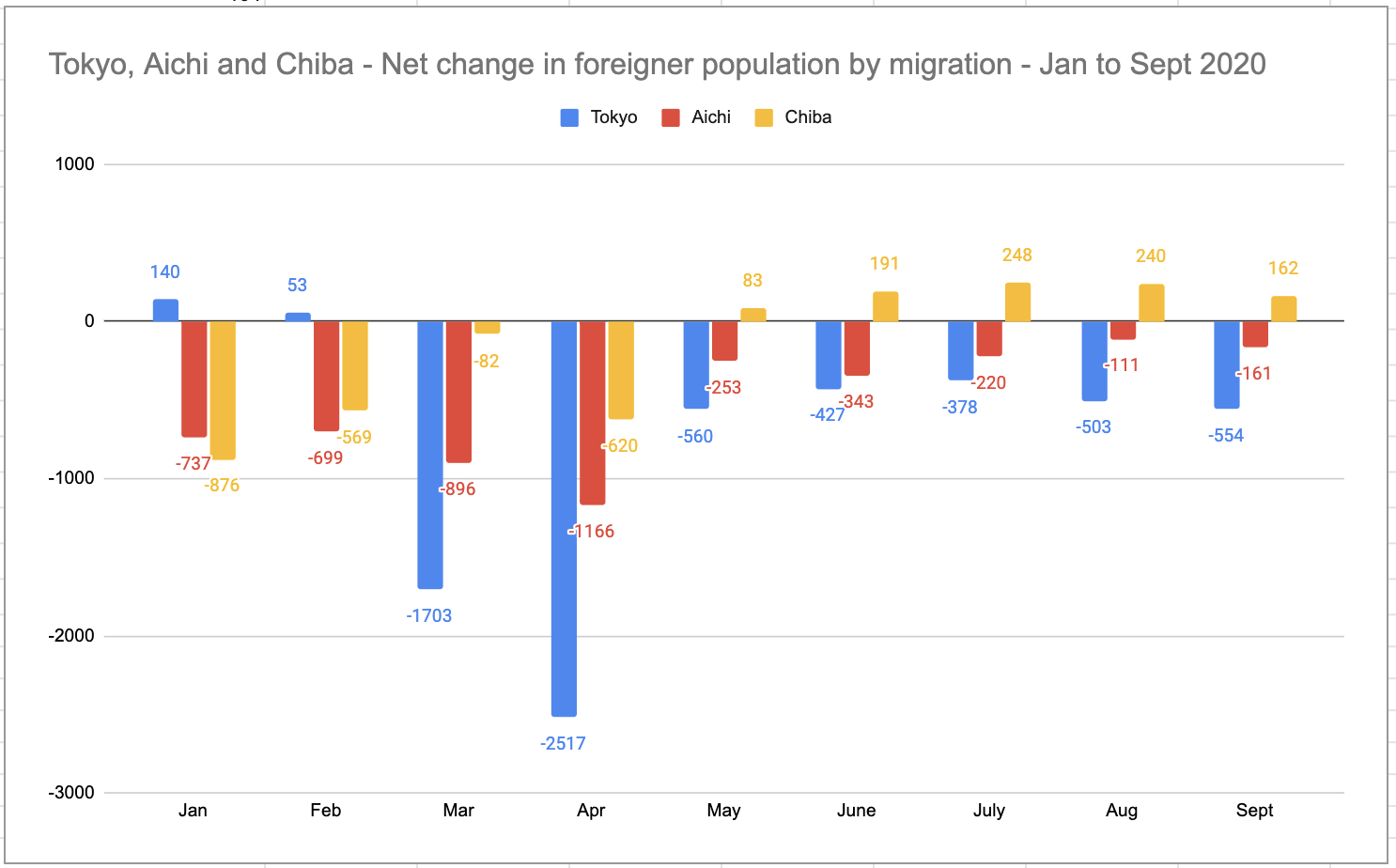