Where in Tokyo do most foreigners live?

In this article we take a look at the foreigner population of Tokyo to see what nations are most represented and where in Tokyo most foreigners live. The data comes from a recent survey by the Tokyo Metropolitan Government.

What do we mean by Tokyo?

Tokyo can mean a number of things depending on what geographic definition you use.

The mainland portion of the Tokyo consists of the 23 Wards to the east and the cities and towns of the “Tama” area to the west.

Izu Oshima is the largest of the Izu Islands, a group of volcanic islands under the administration of the Tokyo government. They are off the coast of the Izu Peninsula.

The Izu and Ogasawara Islands

The Tokyo metropolitan government also administers  two island chains in the Pacific Ocean: the Izu Islands, and the Ogasawara Islands, which are located more than 1,000 km away from the mainland.

What percentage of Tokyo’s population consists of foreign residents?

What is the breakdown of foreigners by continent of origin? 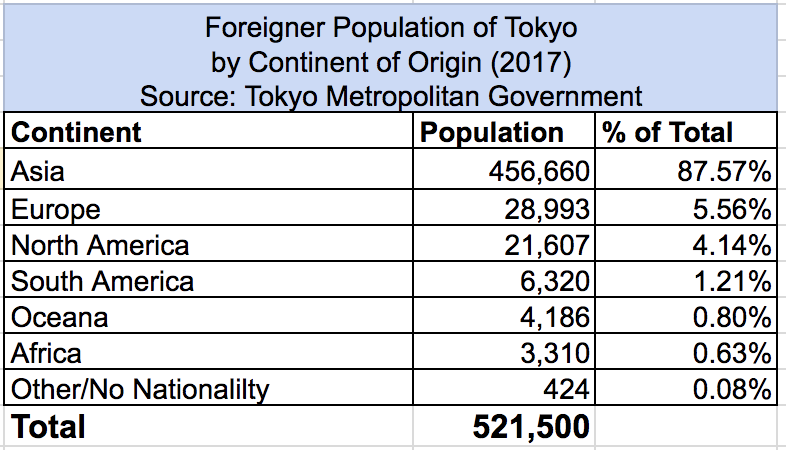 What nations are most represented in Tokyo’s foreigner population?

How many foreigners live in the Tokyo 23 Wards?

How popular are the western suburbs?

Are there foreigners living on the outlying islands?

There are a grand total of 252 registered foreigners living on the islands of Oshima, Miyake, Hachijo, and Ogasawara.

What are the top wards in terms of foreign residents?

Despite the stereotype of foreigners being concentrated in the central wards (Shinjuku, Shibuya, Chuo, Minato, and Chiyoda), the second most popular ward for foreigners is Edogawa, located to the east of the city and bordering Chiba to the east and Tokyo Bay to the south. About 7.6% of the total foreigner population of the 23 Wards can be found in Edogawa Ward.

Major stations in Edogawa Ward include: Koiwa, Funabori, Nishi Kasai, Kasai. At the southern tip of Edogawa Ward is Kasai Rinkai Park, which consists of a bird sanctuary and aquarium.

Third is Adachi Ward, with 6.8% of the total foreigner population of the 23 Wards.

Ayase is a major station in Adachi Ward.

Fourth is Toshima Ward. Toshima is considered one of the eight central wards of Tokyo is and located in the north-center of Tokyo. It has 6.6% of the total foreigner population of the 23 Wards.

Major stations in Toshima Ward include: Ikebukuro and Sugamo.

Koto Ward, literally “River East” has the 23 Wards’ fifth highest population of foreigners, with 6.3% of the total foreigner population. Koto Ward is bordered on the west by the Sumida River and on the east by the Arakawa (River), just across the river is Edogawa Ward (number 2 in the ranking). Tokyo Bay is to the south.

The main neighborhoods in Koto Ward include: Kameido, Kiba, Kiyosumi, Monzen-nakacho, Shirakawa, and Toyosu. Part of Odaiba is also in Koto Ward.

You may also be interested in: What are the most popular places for foreigners to live in Japan?