The average selling price of a newly built condominium in greater Tokyo reached ¥63,600,000 ($490,000 USD) in FY2021, exceeding asset bubble era highs and the highest ever recorded by the Real Estate Economic Research Institute. The average price per square meter was also a record high, at ¥953,000 per square meter.

Here are the other key takeaways from the REEI’s FY2021 market trends report for newly built condominiums in the Tokyo metropolitan area. The report covers the period from April 2021 to March 2022

Developers in greater Tokyo released 32,872 units for sale, an increase of 13.2% compared to FY2020. This was the first time that the number of units has exceeded the the 30,000 mark since 2018; and a huge jump compared to 2020, which developers put the brakes on sales activities in response to the pandemic. In 2020, only 29,032 units were released for sale.

Taking a look behind the headline numbers, here are a few points worth noting about the underlying numbers.

The Tokyo 23 Wards did most of the heavy lifting

The average sales price in the Tokyo 23 Wards in FY2021 was also 32.8% higher than the average price for the entire metro region.

The Tokyo western suburban cities and Kanagawa prefecture actually had lower average sales prices in FY2021 than FY 2018, as well as having fallen versus FY2020. Chiba prefecture also fell versus the previous year. 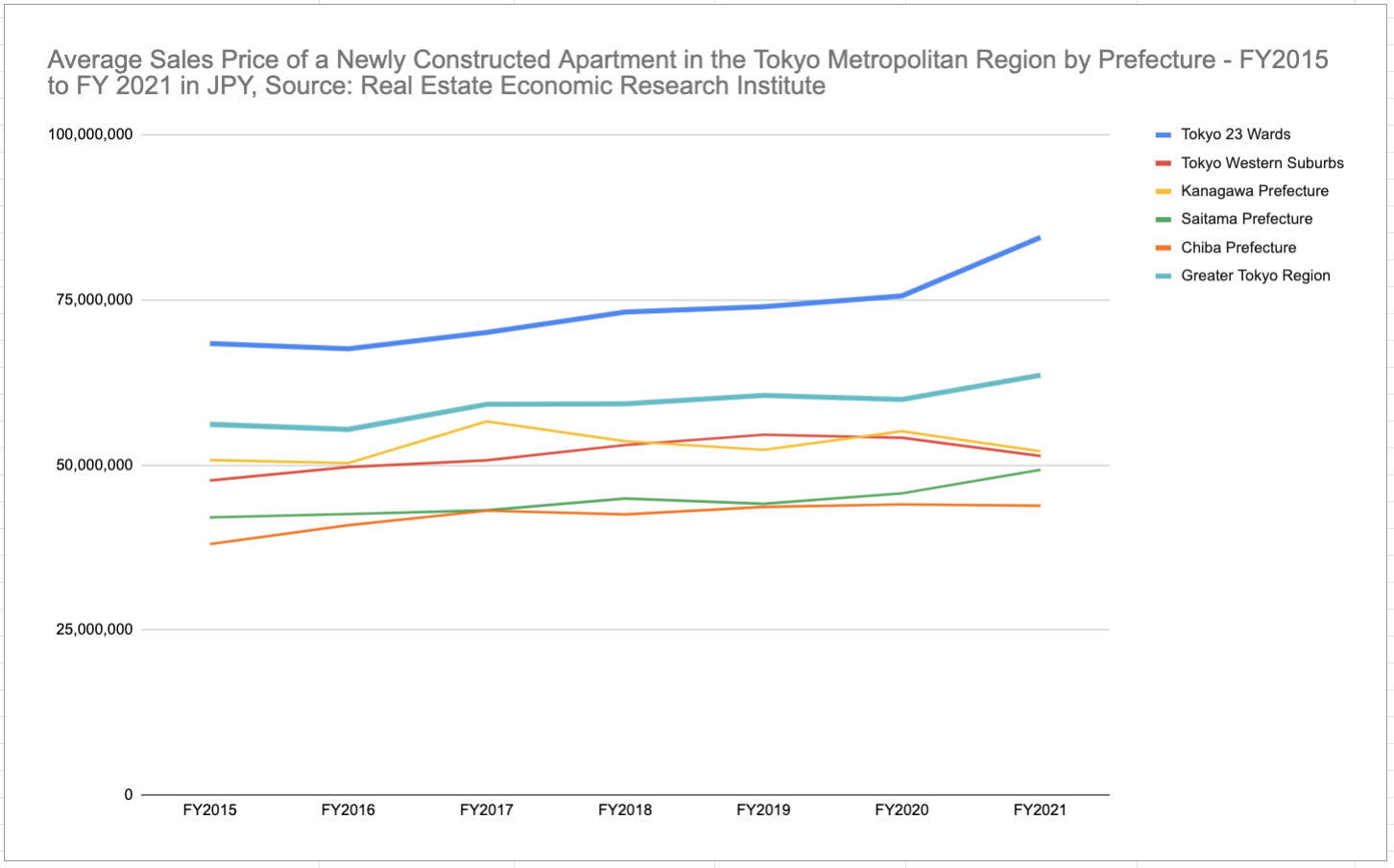 Here is how price growth looked by prefecture on a per square meter-basis for the last seven years:

The percentage change in the average sales price per square meter versus FY2015 was also impressive, with the average price for the greater Tokyo region up 20.2% for the period.

Demand was strong across all prefectures

Every prefecture had a contract rate above 70%, indicating a sellers’ market, with demand exceeding supply. The contract rate in Chiba was close to hitting 80%. Even as more developers are building in the prefecture in response to urban redevelopment projects, rising land prices in central Tokyo, and a shift to people moving to the suburbs, there is still not sufficient inventory to meet demand.

Tight supply in the Tokyo metro region and the likelihood of ongoing historically low mortgage rates means that buyer demand will likely remain buoyant this year. If so, there seems to be a strong likelihood of continued price appreciation.