Japan’s most expensive parcel of land for 30 years running

Japan’s National Tax Agency recently announced rosenka (路線価) Roadside Land Value data for January 1st, 2015. The key takeaways from the data are 1) nationwide land prices declined 0.4%, the seventh consecutive year of decrease, but the rate of decrease is slowing 2) prices rose in 10 prefectures (Miyagi, Fukushima, Saitama, Chiba, Tokyo, Kanagawa, Aichi, Kyoto, Osaka and Okinawa) but declined in 35 prefectures and 3) rising land prices have been driven by increased investment by foreign funds lured by relatively high positive yield spreads. The background is, of course, yen depreciation and low interest rates, which in turn have been driven by Abenomics and the 2020 Olympic effect.

The most expensive parcel of land in Japan

Based on the rosenka survey, the most expensive piece of land in the country was the land in front of the Kyukyodo stationery store near Ginza station, specifically Ginza 5-Chome along Chuo Dori in Chuo ward, Tokyo.  In 2015, the rosenka value of this land was 26,960,000yen (about $219,000 at today’s exchange rate) per square meter, an annual increase of 14.2%, which was also the highest rate of in Japan. This piece of land has been the most most expensive in Japan for 30 consecutive years. 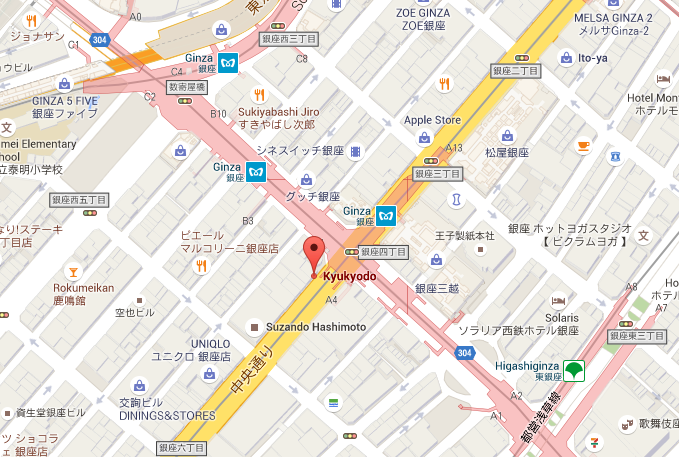 The most expensive parcel of land in Japan is in front of the Kyukyodo stationery store in Ginza 1-chome, Tokyo.

— Of Japan’s 47 prefectures, the rosenka values for Miyagi and Fukushima prefectures showed the top two highest increases, of 2.5% and 2.3%, respectively, as demand rose for land in two of the prefectures most devastated by the 2011 Great East Japan earthquake and tsunami. However, it is important to note that the survey found that in some parts of Fukushima, some land was assessed as having no value.

— The rosenka value for Tokyo (city), as a whole, rose 2.1%, the third highest rate of increase.

— Aichi prefecture saw an increase (of 1.0%) in rosenka value, as the weakened yen gave a boost to the prefecture’s automobile industry, which also had a spillover effect to real estate values.

The rosenka Roadside Land Value survey is conducted by the National Tax Agency to calculate inheritance tax. Valuations are done on land adjacent to major roads. On January 1st, about 329,000 points of land nationwide are assessed, and the data is reported on July 1st.

“Since 1955, the National Tax Office has been publishing the Valuation for Inheritance and Gift Tax (souzokuzei hyouka) every year with January 1st as the date of measure. It is one of the two Roadside Land Values (rosenka), which are used for assessing taxes on land bordering major thoroughfares. The other roadside land value is the Valuation for Fixed Asset Tax (koutei shisanzei hyouka), which has been calculated by local government authorities once every three years since 1958. Although the date of measure is January 1st (like the official land value [kouji chika]), roadside land values are announced every July 1st. The reason the results are published six months after measurement is the very large number of parcels subject to this valuation (approximately 410,000 in 2011). Each of the roadside land values is based on the applicable official land value when available; in general, the valuation for fixed asset tax is roughly 70% of the official land value when available, whereas the valuation for inheritance and gift tax is approximately 80%.” (Quoted from “Legal Issues in Japanese Real Estate Investment, with permission of the author”