Tokyo is a sprawling metropolis and average rent varies widely. Generally speaking, the further away you go from the city center, the lower the rent.

So when you are apartment hunting in “Tokyo” you might hear that you can save on rent by living outside the central six wards or outside the Yamanote line, or better yet, outside the 23 Wards altogether.

What exactly are the Tokyo western suburbs?

Most of the Tokyo Metropolis ((東京都 Tōkyō-to) consists of the mainland areas: the Tokyo 23 Wards lying to the east and the Tama area, to the west. On Real Estate Japan, we sometimes refer to the Tama area as the the Tokyo western suburbs.

How popular are the western suburbs?

What is the average rent in the Tokyo western suburbs?

The table below details the average rent by apartment layout in the 26 cities in the western suburbs of Tokyo.

As explained in detail in this article (What is the average rent in Tokyo?), there are many factors that go into setting rent levels, including the size of the apartment, layout (whether it’s 1R studio or 1LDK with an actual bedroom), and distance to the nearest station, among others.

Looking at average rent citywide, one of the main determinants of rent is geography: how far the property is from the center of Tokyo, generally defined as the six central wards, which together have the highest average rent in all of Tokyo: Minato, Shibuya, Shinjuku, Bunkyo, Chiyoda, and Chuo. 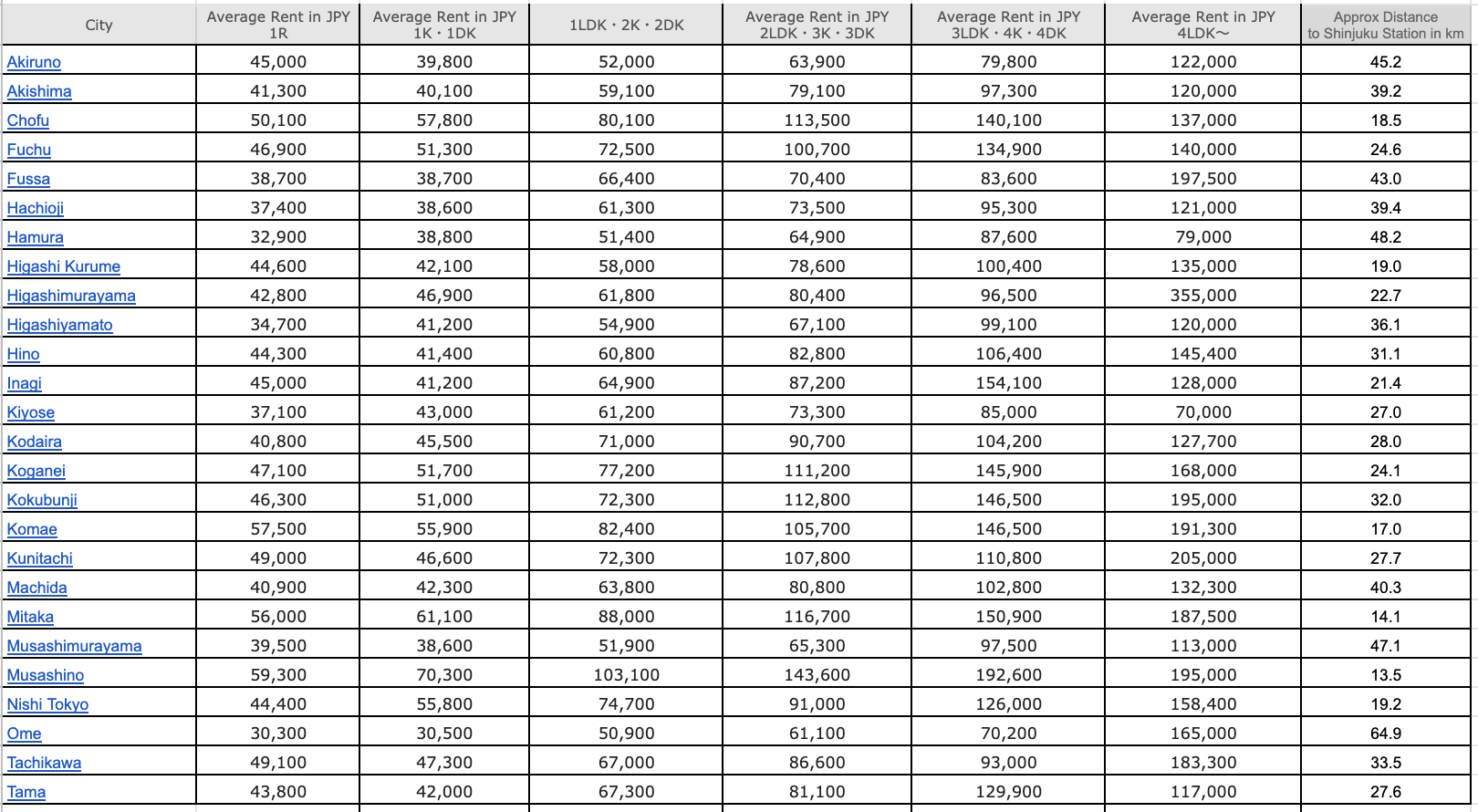 The further west you go, the lower the rent

We can see from the data that in general, the further you go from central Tokyo, the lower the rent.

Click on the link to see For Rent properties in each city. The listings on Real Estate Japan generally follow these price trends and in many cases, you’ll be able to find apartments for less than the average rent listed in the table below.

For people who like to see data in graphical form…

The graph below correlates distance from JR Shinjuku Station to each of the 26 western cities. 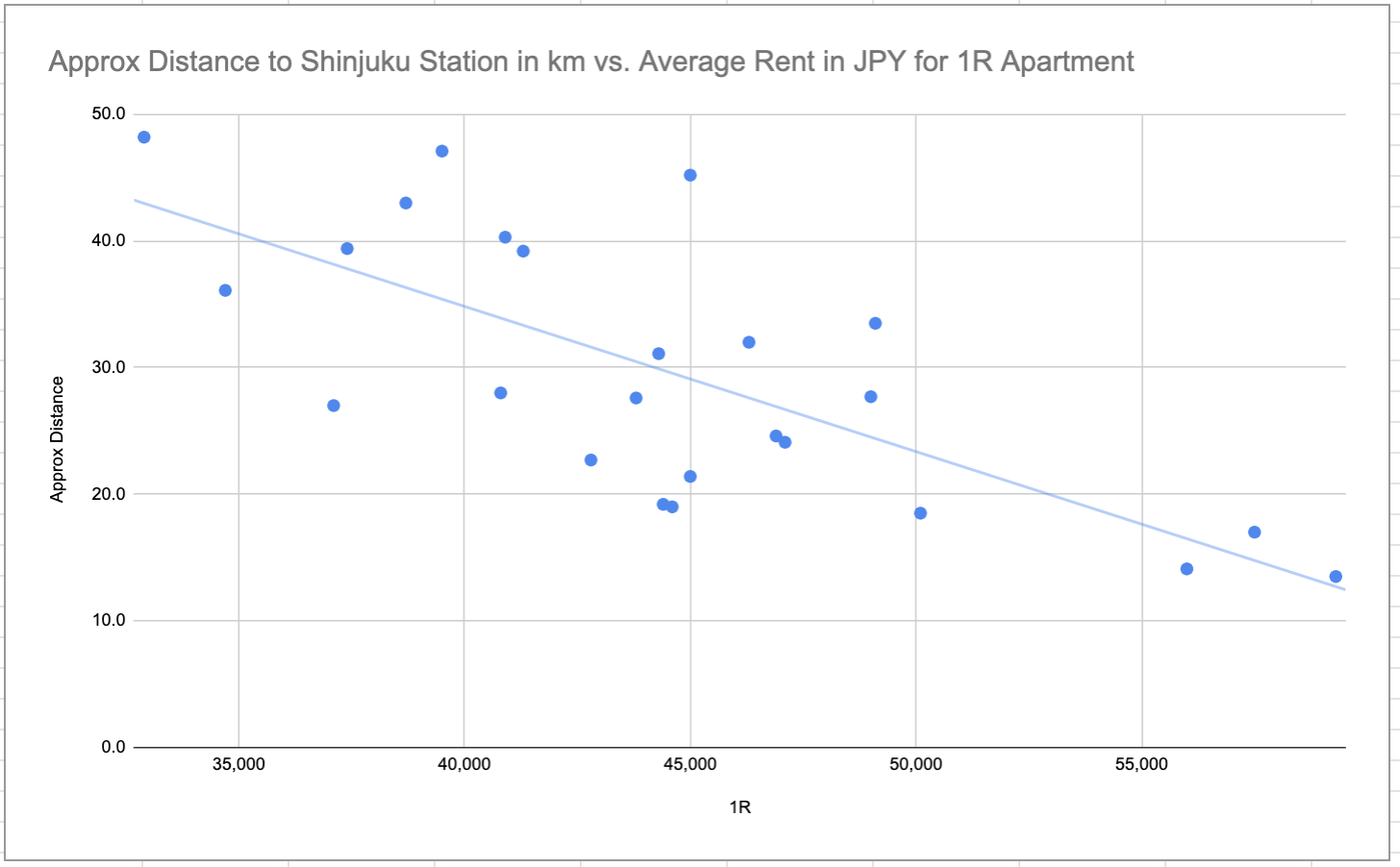 How much can you save in rent?

If you look only at the overall numbers, you can save significantly on rent by living in the western suburbs, as opposed to the Tokyo 23 Wards.

What is the percentage difference in average rent by layout in the western suburbs versus the 23 Wards?

What would you be giving up (if anything)?

These are indeed eye-popping percentages, but there’s a reason that rent is less expensive in the suburbs. In general, housing here is less desirable because many people who live in these so-called bedroom communities are commuting to work or school in central Tokyo.

And the commute time is not for the faint of heart. For example, from the city of Ome (located about 64.9-km from JR Shinjuku Station) it is about an hour commute to Shinjuku Station. And, of course, that’s just to get to Shinjuku. Getting to your school or office may require another transfer or two.

The main “sacrifices” in living outside central Tokyo are time, convenience, and the many sights, sounds, shopping, dining, and entertainment options that central Tokyo offers.

However, these things are not necessarily on everyone’s must-have list. In fact, many people prefer to live in the western suburbs exactly so they don’t have to deal with the crowds on their days off (and to be closer to nature). Mt. Takao, for example, a popular day-trip and hiking spot for people who want to get out of the city on the weekend, is located in Hachioji.

Another important point to note is that although we’ve lumped the “26 western suburban cities” together to look at average rent levels, some of these cities are major transportation and commercial hubs unto themselves.

Cities like Hachioji, Machida, Chofu, Tachikawa and Musashino are very popular with single people, couples, and families who are looking for a calmer residential environment without giving up major urban conveniences. 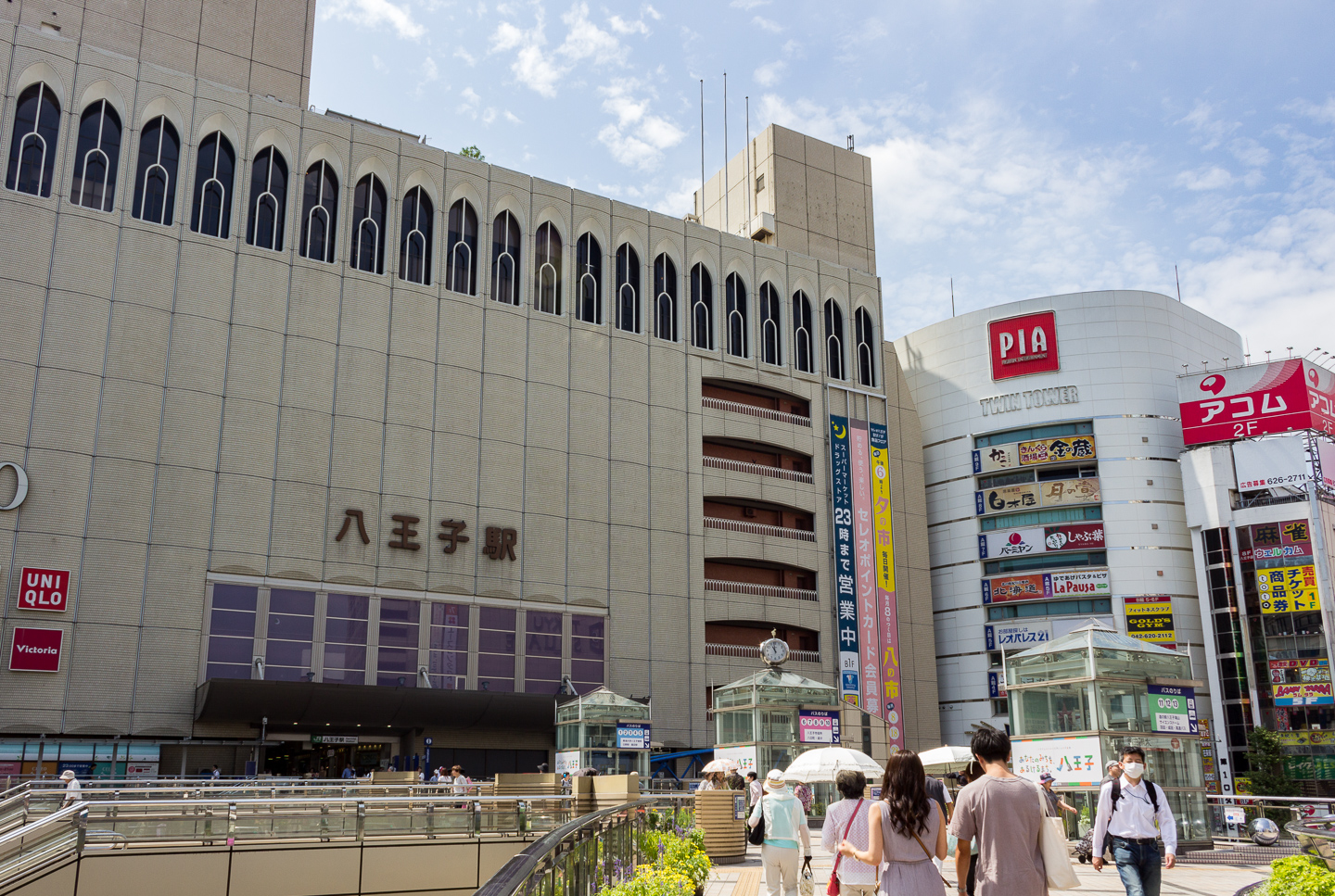 Right around the North Exit of Hachioji Station you’ll find a variety of department stores, making it seem quite city-like for being almost 60 minutes away from downtown and 37-min direct to Shinjuku Station. Photo: Scott Kouchi

Average rent for a 1R, for 5 most popular western Tokyo cities (by number of foreign residents)

Read the in-depth area guides to learn more about the Tokyo western suburbs to see if they may be right for you! 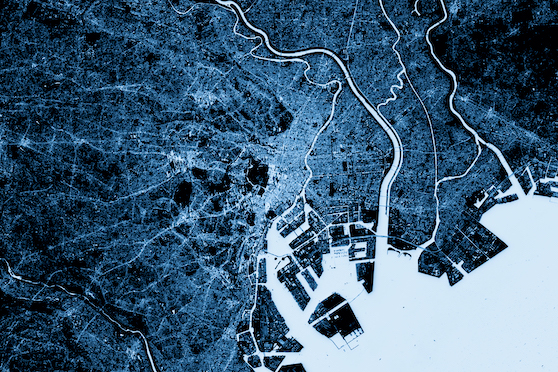 Please click on the image to jump to the Tokyo Area Guides. Image: iStock

Lead photo: Takaosanguchi Station is a railway station on the Keio Takao Line in Hachioji , Tokyo. It is the main point of railway access to Mount Takao. Taken November 2016 via iStock.