Facts about deposits and key money in Japan

When you’re looking for an apartment in Japan, you’re often told that deposits and key money are a fact of life. Another canard is that key money is usually much higher in Osaka than in Tokyo. Other people will tell you that there are apartments available where you don’t have to pay any deposit or key money at all.

What is the truth behind these statements?

“You always have to pay a deposit AND key money when you rent an apartment in Japan.” 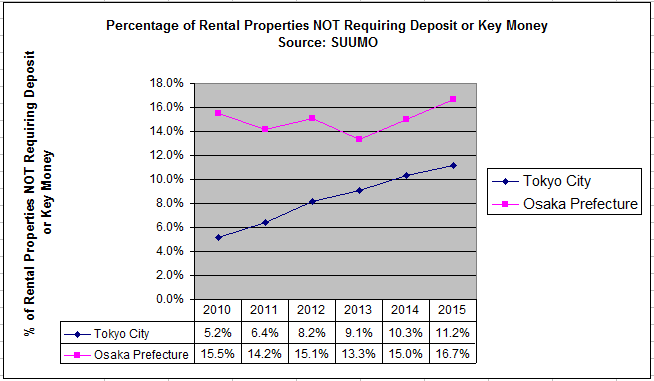 “You always have to pay a deposit when you rent an apartment in Japan.”

False. The following chart shows the percentage of apartments that do not charge a deposit (but may charge key money!). 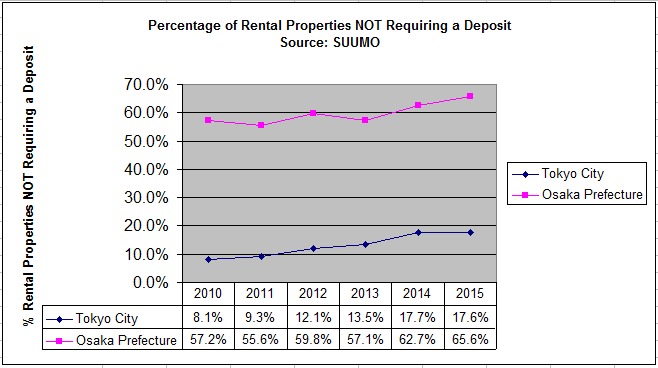 The percentage of rental properties that do not require a deposit is much higher in Osaka (65.5% in 2015). Does this mean that landlords in Osaka are more confident that their tenants will not do damage to their properties? Not really.

In cases where the tenant only pays a deposit designated as shikikin (and no hoshoukin), when the apartment is vacated, the landlord is supposed to deduct a cleaning fee from the deposit and return the balance to you. This is the usual practice in Tokyo. In practice, hoshoukin in addition to shikikin, is not common in Tokyo.

In Osaka, however, in cases where the tenant pays hoshoukin in addition to shikikin, the landlord deducts the shikikin and the cleaning fee from the hoshoukin, then returns the balance to you. In practice, houshoukin functions a lot like a second deposit.

What about key money?

“Key money is a cultural custom that you can’t avoid.”

False. The following chart shows that there is a growing percentage of apartments in Tokyo that do not charge any key money. In Osaka, however, there is a slight trend towards more apartments charging key money. 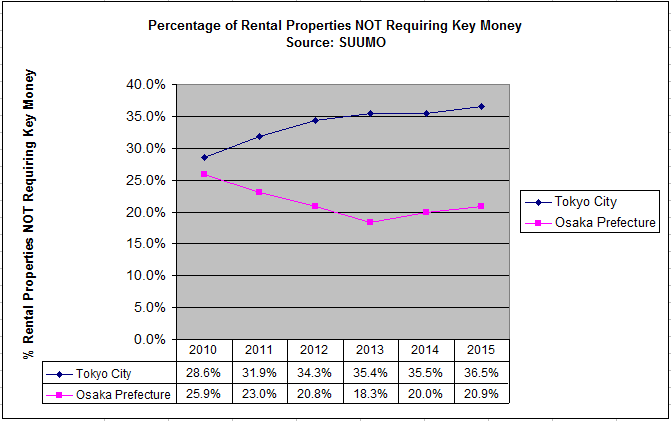 “Key money is usually higher in Osaka than Tokyo.”

True. According to data compiled by SUUMO, the average amount of key money (as a multiple of the monthly rent) is higher in Osaka than Tokyo, but as the following chart shows, this multiple is on a downward trend in both cities. 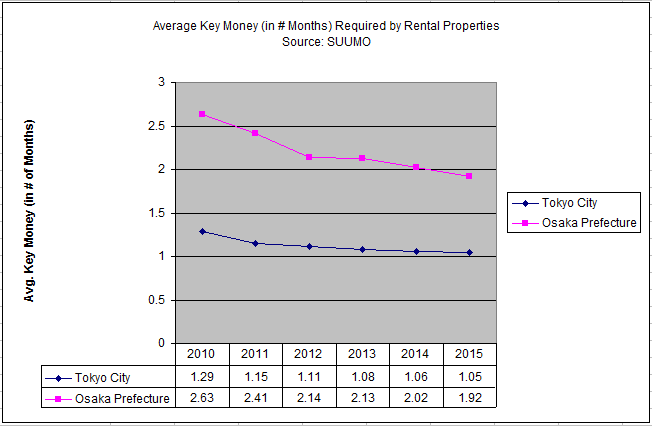 There is also a downward trend in average deposit (as a multiple of the monthly rent) in both Tokyo and Osaka.

Looking at these downward trends, another takeaway is that tenants are actually paying less in combined deposit and key money now (2015) than they were five years ago.

In Tokyo, in 2010, the average deposit and key money charged for a typical residential lease totalled about 2.76 months of rent. This decreased to an average of 2.19 months in 2015.

In Osaka, in 2010, the average deposit and key money charged for a typical residential lease totalled about 4.03 months of rent. This decreased to an average of 2.81 months in 2015.

You may also be interested in this article: Upfront cost of renting an apartment in Japan,