What is the average rent in Tokyo by Ward?

We recently posted an article with data showing that the average rent in Tokyo’s 23 wards is at the highest point since the global financial crisis.

But as the saying goes, location is (almost!) everything in real estate.

Depending on exactly where you look in Tokyo, the average rent may have decreased on a year-on-year basis, or increased much more than the overall average for the city as a whole.

In this article, we drill down to see exactly what the average rent is in each of Tokyo’s 23 wards.

What is the average rent in Tokyo?

This average rent represents a year-on-year decrease of 2.0% and a decrease of 0.86% in cost per square meter for Tokyo’s 23 wards as a whole.

Unsurprisingly, in terms of average rent per month, the five most expensive wards in Tokyo are located in central Tokyo.

What might be a little surprising is that the average rent in two of these wards (Minato and Chiyoda) actually decreased year-on-year versus the same quarter in 2014. The number in parentheses shows the year-on-year percentage change in average rent.

Why did average rent decrease in such desirable locations?

One explanation for the year-on-year decrease in Minato and Chiyoda wards is that due to high demand for rental housing in central Tokyo and demographic changes leading to smaller and smaller household sizes, rental units in central areas are actually decreasing in size, as builders squeeze smaller apartments into a limited amount of conveniently located areas.

If we look at the average rent per square meter, the most expensive wards in Tokyo are:

Up and Coming Koto Ward

Another takeaway from this data is Koto ward’s relatively high ranking in the average rent tables.

Koto (which means “East Bay”) ward is located to the east of the city center, bounded on the west by the Sumida River and to the east by the Arakawa River. It encompasses part of Odaiba and Tokyo Bay. 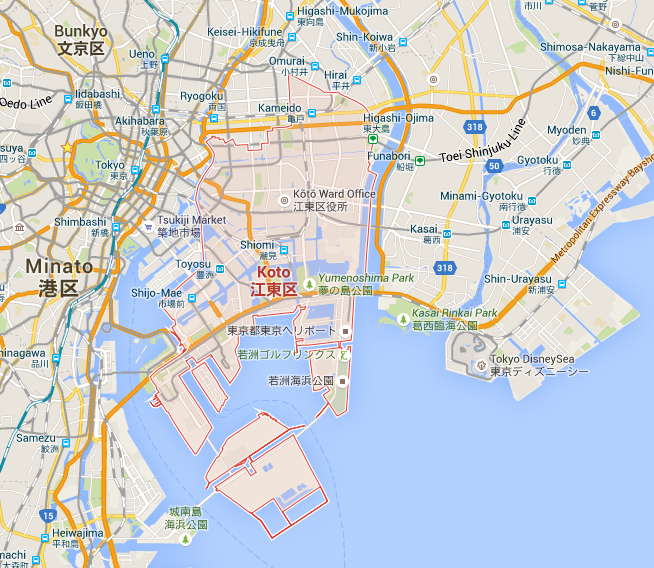 The average rent in Koto ward was 112,000yen in the second quarter of 2015 (a year-on-year increase of 3.7%). This makes Koto the sixth most expensive ward in Tokyo, just behind Meguro.

One reason for rising average rent levels in Koto is the increasing amount of new construction and development in the area related to the 2020 Tokyo Olympics. The Olympic Village itself is slated to be located in the Tokyo Bay area.

The least expensive wards in terms of average rent are located in northern Tokyo. The number of parentheses shows the year-on-year percentage change in average rent:

As we wrote in another post, some of the least expensive stations in Tokyo’s 23 wards are located in Adachi ward, where the average rent is 26% lower than the average rent for Tokyo as a whole

Please see the chart below for detailed data by ward.

The analysis above is based on second quarter (April to June) 2015 data from the Real Estate Information Network System (REINS) for Eastern Japan, which reports transactions carried out by its members, who are real estate agents working in the greater Tokyo area. We only look at data for mansion-type apartments, which are newer-construction steel-reinforced buildings.

Search for apartments for rent in Tokyo on our listing pages.