Over a year into the pandemic, as Tokyo has seen a net population lost to other prefectures, including the net movement of resident foreigners away the capital, what are we seeing in terms of average rent data in the greater Tokyo area?

In its latest survey, Tokyo Kantei, a Tokyo-based property data company, reports that average rent in greater Tokyo increased in July by 0.7% versus June and 6.3% year-on-year to ¥3,297 per square meter. This would mean, for example, that a 25-sqm apartment would cost ¥82,245 per month to rent.

Due to the greater share of properties in Tokyo versus Chiba, Saitama, and Kanagawa prefectures, price movements in the 23 Wards have a greater effect on the overall average for the greater capital region.

Let’s take a more in-depth look at the data.

Average rent in Tokyo is much higher than anywhere else in Japan. This is a good basic fact to know if you are new to the Japanese real estate market. Here’s what average rent per square meter was in July, based on Tokyo Kantei data:

If you want to save on rent, it makes sense to consider living outside the 23 Wards proper and commute into town. Since more and more companies are also allowing (or even requiring) that people work-from-home, we can also expect more people to telecommute from Chiba, Saitama, or even further away.

However, this doesn’t mean that we should expect a sudden or substantial population drain away from Tokyo. As we covered in a recent post, there is such a problem with de-population and lack of economic growth in regional areas that the government is offering subsidies of as much as ¥3 million for people to move away out of Tokyo.

Conversely, if you are looking at this data from the perspective of a landlord, you will want to factor in vacancy rates and potential yield in addition to demographic factors, among many other things, if you are weighing the merits of a 23 Ward property versus one in Chiba, for example.

Where have rents risen the most this year?

Looking at city data, what we see is that average rent in the Tokyo 23 Wards has only risen marginally this year.

In the greater Tokyo area, the cities of Chiba, Yokohama, and Saitama have had the highest rates of growth in rent.

The busy rental season in Japan is January to March, so we usually expect to see year-on-year increases in average rent in these months.

More unusual is year-on-year increases during the slower summer months (May to July) when most people have already settled into their apartments. This is one of the points that stands out in the data for Chiba. In normal pre-pandemic years, we would also expect to see an uptick as we head into fall; and we’ll be analyzing this as the data comes out in the next few months.

So far this year, Osaka and Kobe have both had, on average, negative monthly growth in rent, while Nagoya, has seen relatively higher growth. 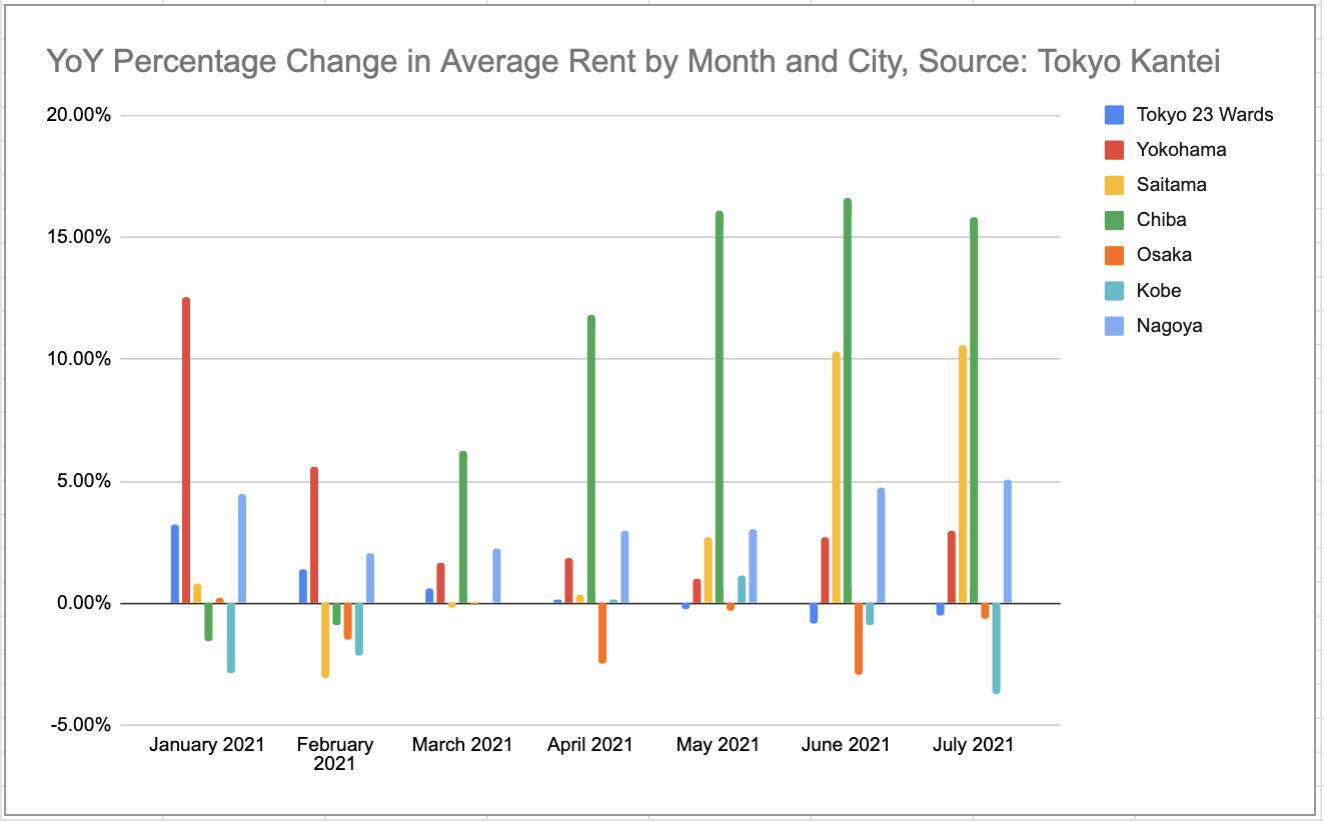 Price of Land in Japan Falls Nationwide for 2nd Consecutive Year: But here’s where prices rose

I’m coming to Tokyo to study, help me find an apartment: Commuting to Yoyogi

Can I legally rent out my home in Japan when I’m not living there, like on AirBnB?